‘The People’s Convoy’ Kicks Off at California Rally, Truckers Begin Trek to D.C.

Children’s Health Defense is providing live coverage of “The People’s Convoy,” as truckers and peaceful protesters make their way across the U.S. to protest COVID-related mandates and loss of freedoms. 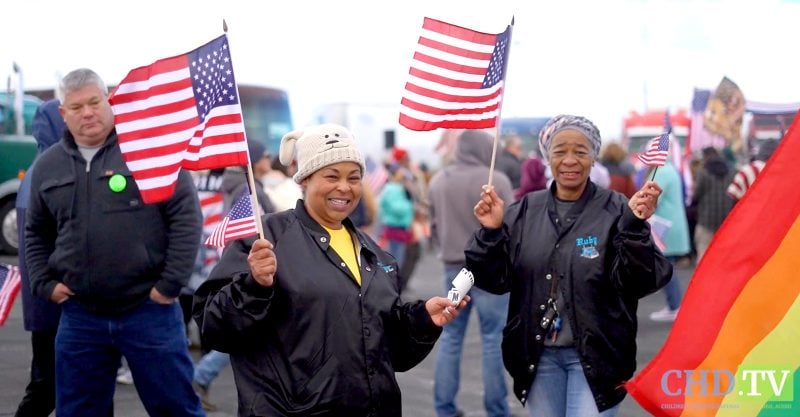 Children’s Health Defense (CHD) is providing live coverage of “The People’s Convoy” as truckers and other protesters travel across the U.S. toward Washington, D.C. area in a peaceful protest of unconstitutional COVID-related mandates and government overreach.

“After witnessing the extreme bias of mainstream media in covering the Canadian convoy over the past month, CHD decided to step in to offer people a truthful accounting of the progress of The People’s Convoy here in the U.S.,” said CHD President and General Counsel Mary Holland.

“Characterizing people who disagree with government edicts, no matter how tyrannical, as ‘terrorists’ has become the norm in most media today. CHD provides an alternative to such serious distortion of facts.”

In his remarks to the estimated 600 people who joined the convoy in Adelanto Kory said, “I’m here to speak truth and data and science. We’ve been subject to policies that have no scientific basis. These policies are failing.”

The convoy then headed to Arizona for day two of the event. The convoy plans to arrive in the DC area before President Biden’s March 1 State of the Union address.

“We hope that President Biden will listen to what the truckers have to say,” said Holland. “They represent the millions of American citizens who want to exercise their First Amendment rights and their right to informed consent.”

Viewers can keep up with the progress of the convoy and get route updates by tuning into CHD.TV each weekday morning at 10 a.m. ET for updates from Dooley, Victor and CHD Grassroots Organizer Michael Kane, reporting from New York.