For more than 25 years, the VA and DOD have refused to acknowledge the abnormally high rates of birth defects among children of Gulf War veterans. 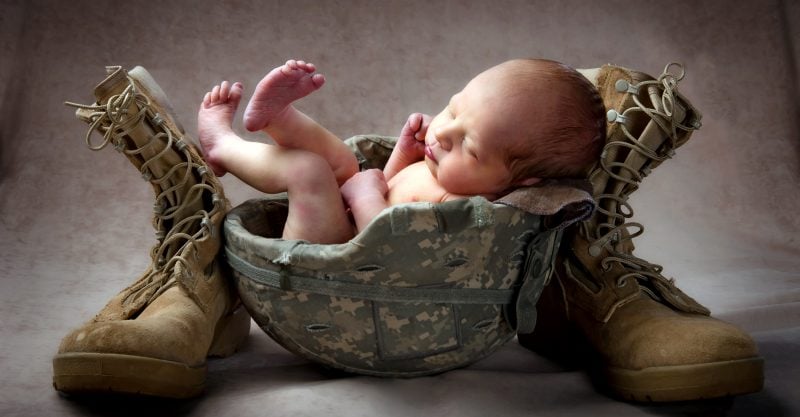 Since I began writing a military column for Children’s Health Defense, emails have begun to march in from weary parents who served in the Gulf War and now have children with birth defects.

Most of these emails are accompanied with an urgent request: “Please tell our story.”

From my first database search on Gulf War-related birth defects, two things became clear. First, any published research on the subject had to include substantiation of the birth defects. Second, the research had to conclude that the birth defects are not statistically significantly different than what can be found in the general population.

This is all-too-familiar territory. We call it “better diagnosis” spin — claiming there aren’t more cases, we’re just doing a better job of diagnosing them.

But the more concerning issue for me as a veteran was my total ignorance on this topic. How was it possible that I had never heard of serious birth defects in the children of my fellow veterans?

I soon found the answer to that question. In 1995, the U.S. Department of Defense (DOD) fact-checked the topic as “embarrassing” to the U.S. — and censored the media from reporting on it.

To this day, the Veterans Administration (VA) and the DOD deny the abnormal prevalence of birth defects in children born to Gulf War veterans, despite evidence to the contrary. Here are some of the studies I uncovered in my research:

Annals of Epidemiology, 2001: Dr. Han Kang reported an increase of miscarriages and moderate-to-severe birth defects associated with military service in the Gulf War. A health survey of 15,000 Gulf War veterans representing four military branches and three components were compared to those of 15,000 non-Gulf War veteran controls regarding reproductive outcomes.

Journal of Epidemiology, 2004: Pat Doyle surveyed 30,000 veterans in the UK and reported increased risk of miscarriage, malformations of genital system and urinary system, defects of the digestive system and musculo-skeletal system and non-chromosome anomalies in children of Gulf War veteran fathers.

According to the LA Times, government officials denied any link to service in the Gulf War, but “experts in the private sector theorize that U.S. troops may have been harmed by any of a wide range of chemical or biological agents; by uranium, sandfly fever or oil fires; or by anti-nerve-gas medications.”

One pediatrician, Dr. Francis J. Waikeman, reported a tenfold increase in Gulf War children with birth defects compared to the general population. And strangely, wives reported their husbands produced “burning semen” that burned their skin. According to the LA Times:

“Dr. Ellen Silbergeld, a molecular toxicologist at the University of Maryland, told a congressional hearing in August that scientists now know that men exposed to toxic chemicals can pass the poison directly to their children through semen. What is frightening, she said, is that the chemicals can cause genetic mutations to the sperm that helps conceive the child.”

On January 30, 1995, People Weekly published “An Enemy Within: Gulf War Vets Face a Medical Mystery: The Birth Defects Threatening Many of Their Children.” The story included heartbreaking personal stories and photos of children of Gulf War veterans born with serious birth defects and deformities, including TAR Syndrome, Goldenhar Syndrome, microcephaly, heart defects and liver cancer. The parents and children tested negative for genetic irregularities. All of the Gulf War fathers reported having adverse reactions to pyridostigmine bromide (PB), an experimental drug to counter nerve agent exposure. According to People Weekly:

“But a report issued last month by the U.S. Senate Committee on Veterans’ Affairs, then chaired by Sen. Jay Rockefeller (D-W.Va.), counters that experimental drugs — chiefly PB tablets and vaccines—- were given to soldiers with no caveats about side effects. Such medications, the report asserted, might well have depressed immune systems and wrought genetic havoc.”

In November 1995, Life magazine dedicated a special Investigation issue to “The Tiny Victims of Desert Storm.” The magazine posed this question on the cover: “Has our country ABANDONED THEM?”

The photographs and vignettes document children, of both veterans and civilian contractors in the Gulf War, with tumors, spina bifida and missing limbs. The magazine suggested that the military’s investigation was deeply flawed and that government scientists were unwilling to validate the surge of birth defects in children of Gulf War veterans, a critical precursor to analyzing potential toxic exposures. According to the Life investigation:

“Some physicians who have treated Gulf vets believe they may be suffering from a general overload of chemical pollutants — and that their body fluids are actually toxic. (Indeed, many veterans’ wives are sick; a few complain that their husbands’ semen blisters their skin.) ‘It was a toxic environment,’ says Dr. Charles Jackson, staff physician for the Veterans Administration Medical Center in Tuskegee, Ala. Other doctors, while agreeing that chemicals or radiation may have caused birth defects, think the vets’ ills came from a germ — an unknown Iraqi biological warfare agent, perhaps, or some form of leishmaniasis, a disease carried by sand flies.”

Is it plausible that the military has a “reckless disregard” for investigating the cause of birth defects because the Pentagon issued PB to military members — after persuading the Food and Drug Administration (FDA) to waive its prohibition on testing a drug for new purposes without the subjects’ informed consent to using an experimental drug?

A U.S. Department of Agriculture research study and a Duke University research study each found that PB is synergistically more toxic when combined with the pesticide DEET, another Gulf War exposure. Soldiers were also ordered to take two experimental vaccines, anthrax and botulism, neither of which had been approved by the FDA.

Epidemiologists use the word “clustering” to describe an ailment that strikes one group of people more than others. Clustering can be a key indicator that something more than chance is causing birth defects. The Association of Birth Defect Children (ABDC) told Life magazine that it found the first cluster of defects in the offspring of U.S. Gulf War veterans : 10 babies with severe Goldenhar’s syndrome, a condition that usually strikes one in 26,000.

The ABDC, which has gathered data on 163 ailing Gulf War babies so far, is tracking four more possible clusters — of victims of hypoplastic left heart syndrome, atrial-septal heart defect, microcephaly and immune-system deficiencies. Significantly, not one of the parents in the ABDC survey has a family history of these types of birth defects.

The data on more than 3,000 children in the Birth Defect Registry’s 2003 presentation to the VA clearly demonstrates that Gulf War veterans have a significant increase compared to non-Gulf War veterans in 28 categories.

DOD censored the media on Gulf War birth defects in 1995

Three days after Life magazine published a multi-page special investigation report of Gulf War birth defects with powerful photographs and criticism of the military’s lack of investigation, the Office of the Secretary of Defense issued what is known as the Wallner memo.

The memorandum, “Identification and Processing of Sensitive Operational Records,” lists five categories of sensitive documents regarding Gulf War Illness to be forwarded to a special investigation team. According to the memo, the “purpose of this procedure is not to stop any declassified or unclassified documents from going on GulfLINK, but to allow the investigation team time to begin preparation of a response on particular ‘bombshell’ reports.”

In effect, the details of the memo confirm that the Secretary of Defense was censoring any media, including the internet which was still in its infancy in 1995, from publishing any documents that would “generate unusual public/media attention” and “embarrass the government or DOD.” The memo even designates with names the first generation of fact checkers at the DOD.

The horror story beyond the censorship is that evidence exists to show that veterans were adversely affected by toxic substances during the Gulf War, and that some of those toxic substances were mandated by DOD without FDA approval.

Moreover, these toxic substances were communicable to family members and with intergenerational effects on children. Most of these families faced financial hardship and reliance on Medicaid when exiting the military due to the catastrophic medical bills for a child with pre-existing conditions that insurance would not cover. That is reckless disregard for our military families.

The meeting notes to the most recent Research Advisory Committee on Gulf War Veterans’ Illnesses in the District of Columbia in 2019 indicate that the Veterans Administration and DOD are still denying the abnormal prevalence of birth defects of Gulf War children that were identified 25 years ago. The Facebook group, Gulf War Babies and Parents United, has 1,300 members and offers support to families.