The industrial food system has degraded biodiversity, leading to the depletion of the diversity of nutrients, crops, seeds. This, in turn, has had a direct negative effect on human health. 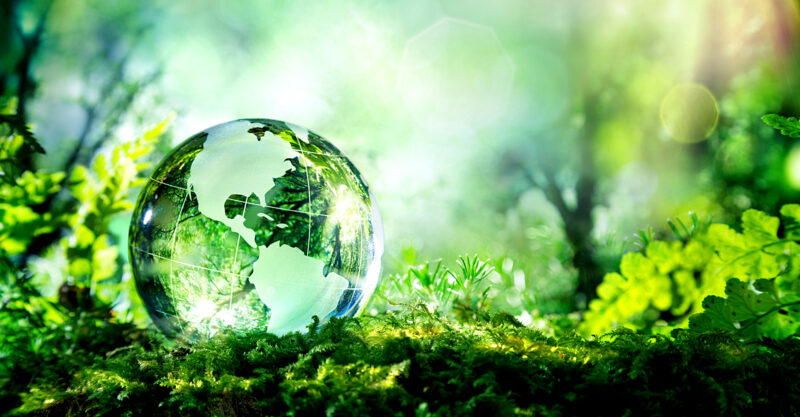 We break down how all levels of biodiversity have a direct and tangible tie to human health. Especially as an intimate connection exists between the biodiversity of our diets and gut, and our surrounding ecosystems, making health a continuum.

Biodiversity is, hence, needed at every level of the food system.

With the rise of industrial agriculture, health has been removed from consideration under the myth of higher productivity.

This means that environmental degradation and the destruction of biodiversity, leading to the depletion of the diversity of nutrients, crops, seeds has a direct effect on human overall health.

In the wake of these health and biodiversity crises, it becomes even more important to transition to a biodiversity-based agroecological food system based on cultivating care and health of both people and nature.

The future of our food and agriculture systems is shown by small farmers, local communities and gardeners who are already implementing biodiversity-based organic agroecology, which preserves and rejuvenates the health continuum between the soil, plants, animals, food and humans.

Acting as a holistic paradigm shift where diversity in all areas is cultivated for ecological resilience and health. 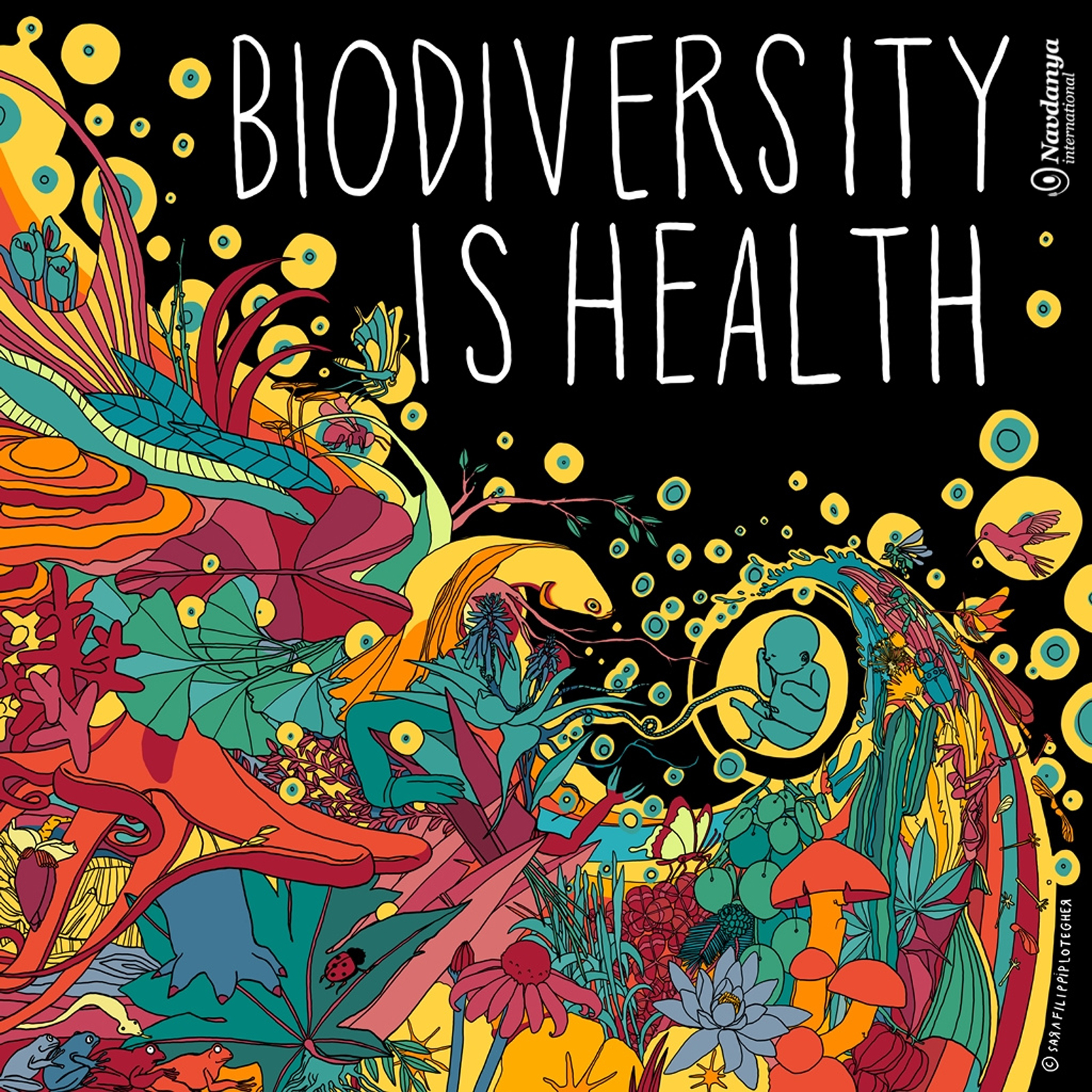 “Biodiversity is life. Biodiversity weaves the web of life. It is not corporate ‘intellectual property.’ It is not a financial asset of those whose greed drives biodiversity extinction and loss.” — Dr. Vandana Shiva 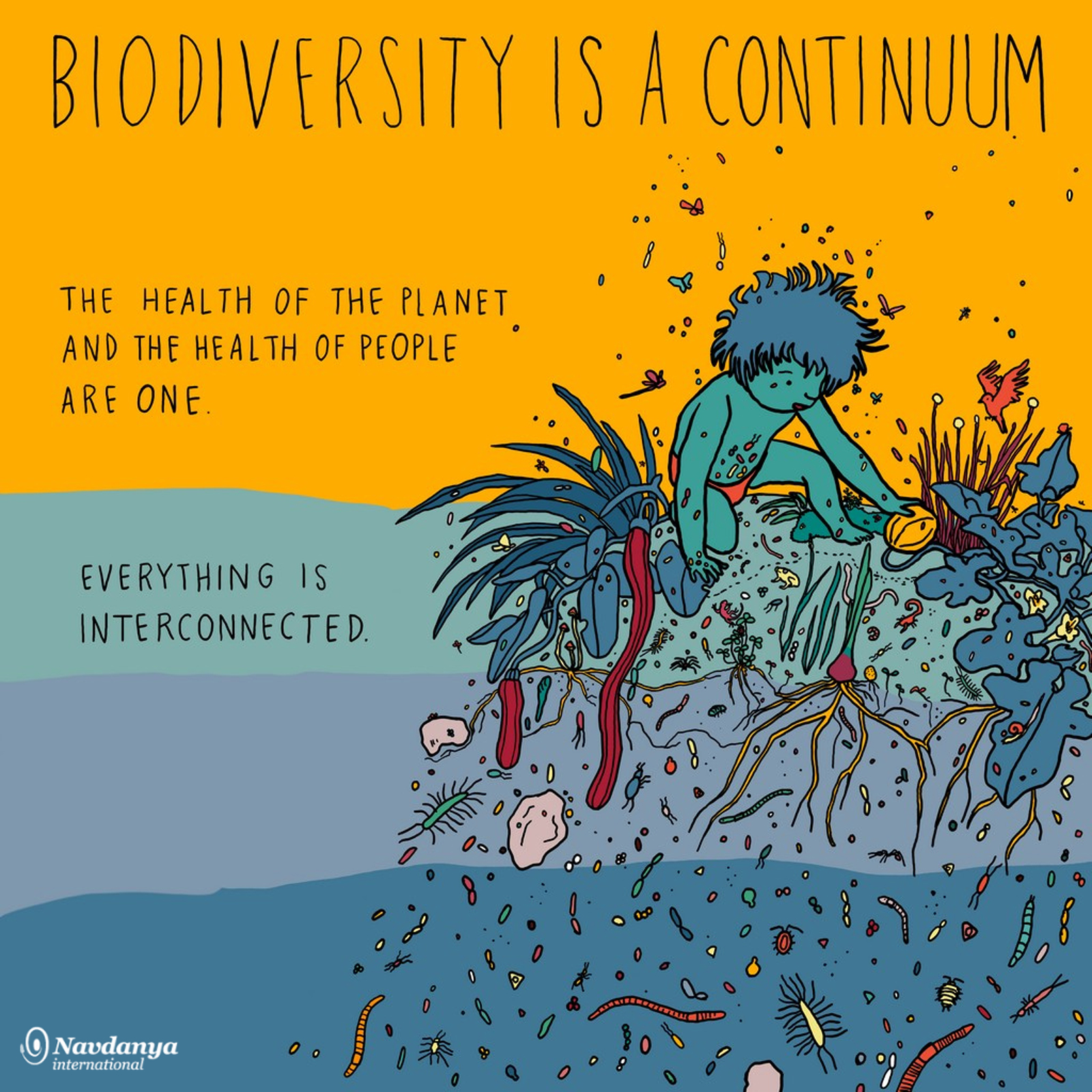 Biodiversity is a continuum

There is an intimate connection between all levels of biodiversity, and the health of every being on the planet.

Biodiversity determines the health of an ecosystem as it creates and maintains niches for a variety of different beings as well as rejuvenating ecological functions.

The greater complexity an ecosystem has, the greater the resilience and health of that system.

All of these processes have a direct and tangible tie to human health, as an intimate connection exists between the biodiversity of the soil, microorganisms, plants and their seed, wild as well as crop varieties and species, and animals, to the biodiversity of our diets and gut. 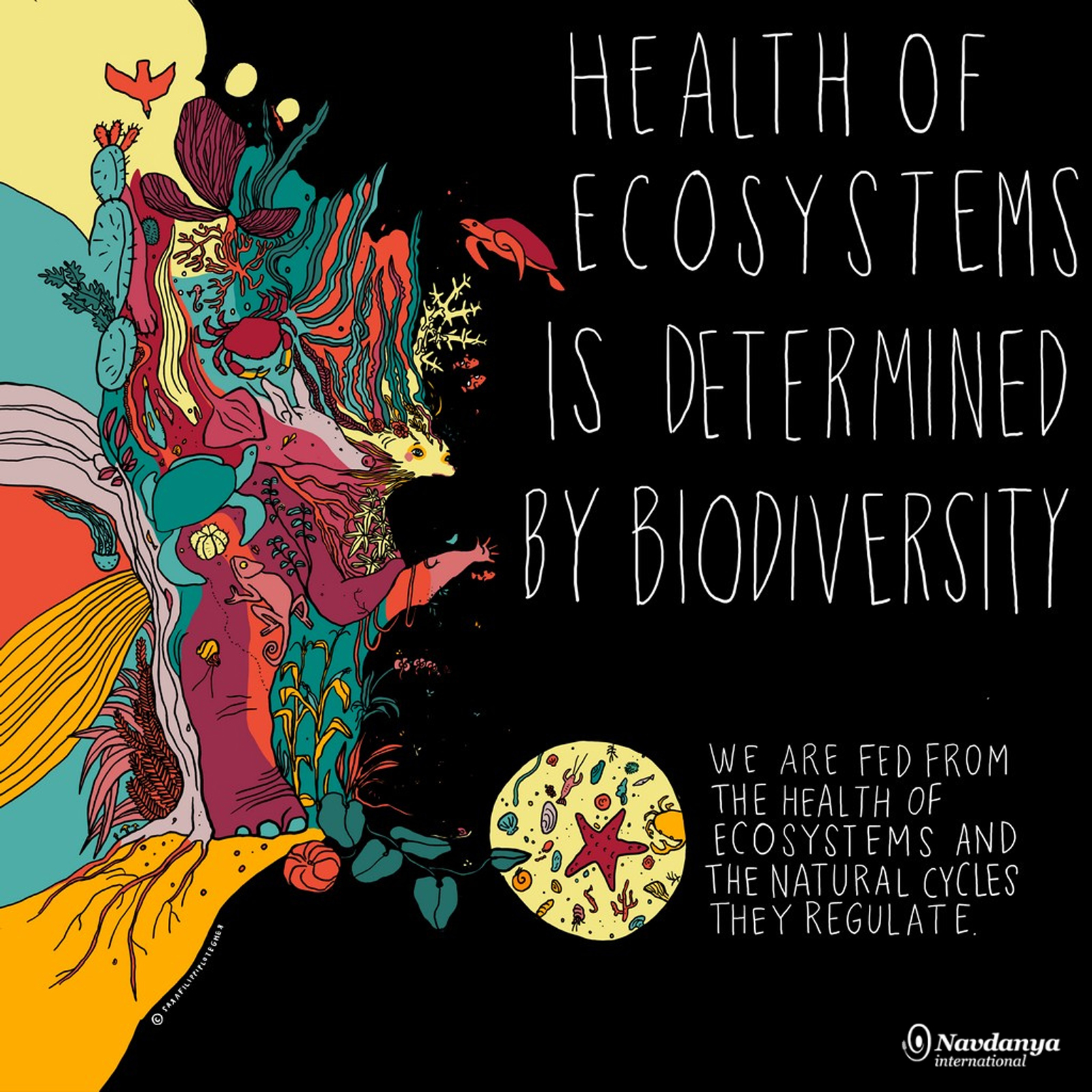 Health of ecosystems is determined by biodiversity

Biodiversity regulates the health of the nutrient, water and carbon cycles that move through the soil and out to the rivers, forests and oceans.

Soil is the most diverse ecosystem on the planet, with one gram of soil containing up to one billion bacteria cells and fungi mycelium, and countless other insects, arthropods and nematodes. 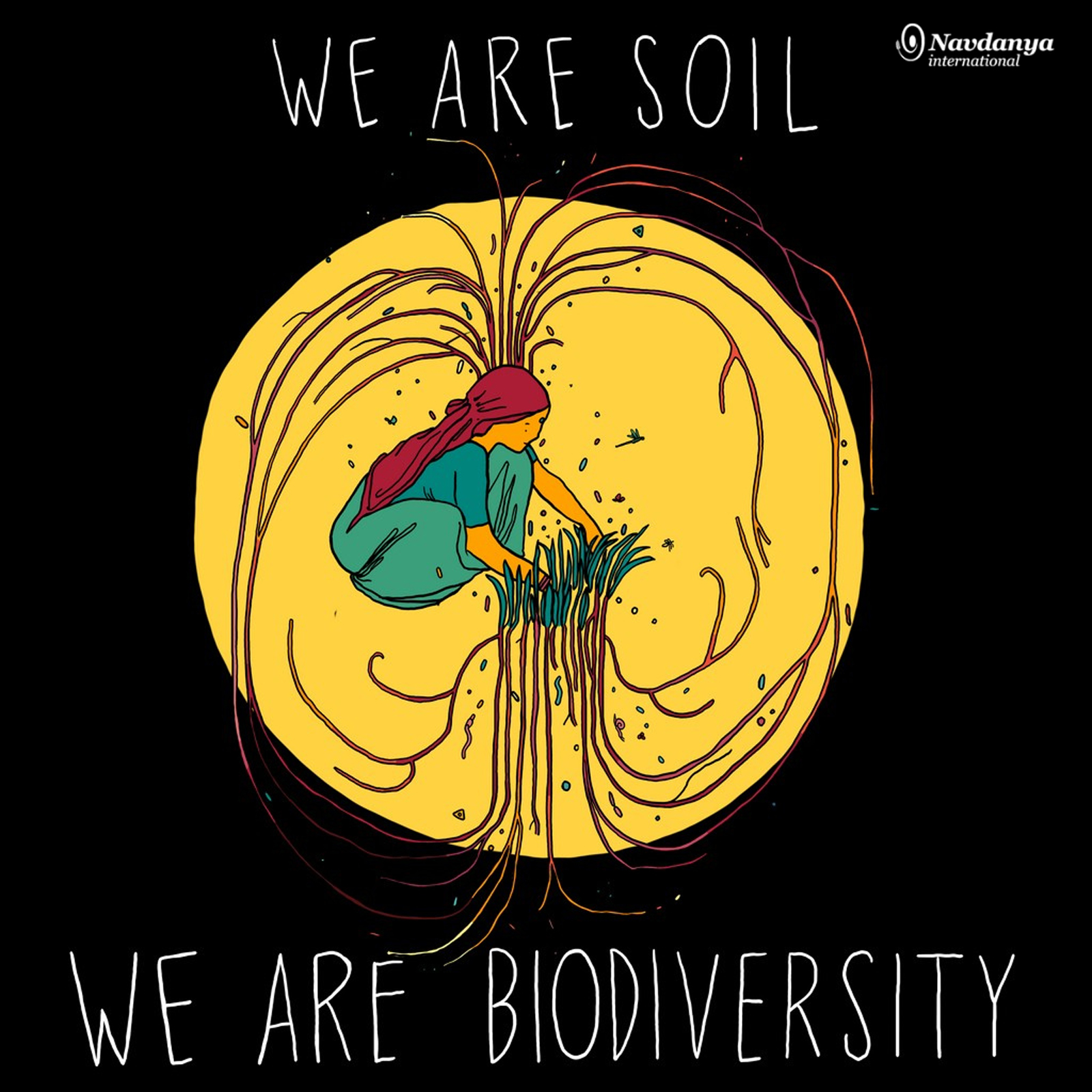 We are soil! We are biodiversity!

The biodiversity of the soil microorganisms is intimately tied to the health and diversity of our human microbiome, through the soil we have contact with, and the food that we eat.

The soil microbiome and the human microbiome are one super-organism, as the soil acts as a reservoir of the diversity of microbiota.

Our microbiome holds the key roles of regulating our metabolism, enhancing our immune system, regulating hormones and the circadian rhythm, and contributing to nutrient generation and absorption.

This means any depletion in the diversity of the soil microbiome caused by industrial agriculture, has a direct effect on human health. 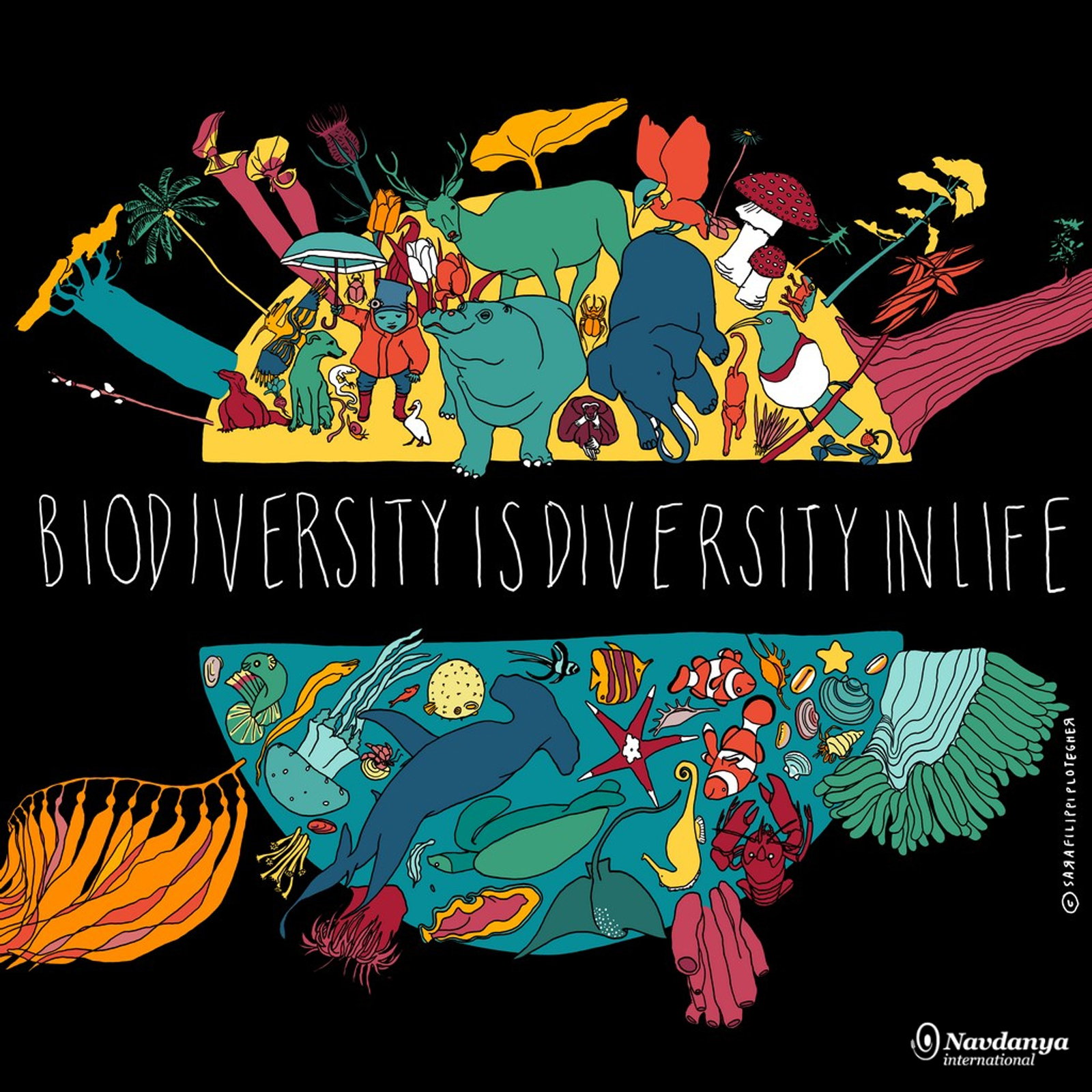 Working in direct relationship with Nature and centering the care of biodiversity and ecosystem health, has historically produced knowledge systems that recognize how all forms of life interact and influence each other to form a complex web of life.

The biodiversity of soils, and the interrelationships of plants and animals, have over millennia given rise to and co-evolved into diverse cultures and knowledge systems based on health, resilience and care for the land.

These relationships have gifted us the huge diversity of seeds, crops and foods that have made up traditional diets and traditional cultivation systems. 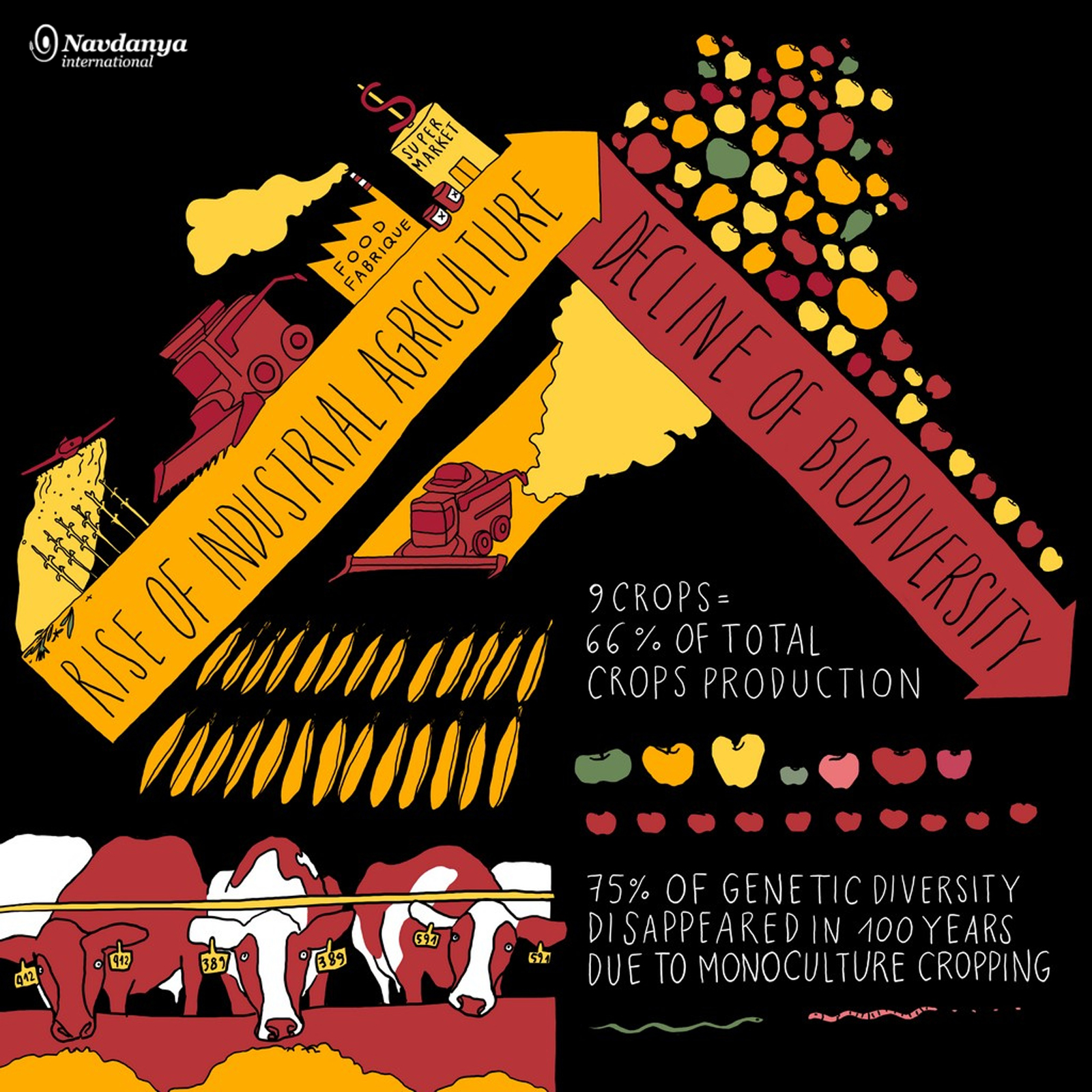 The rise of industrial agriculture has triggered the downfall of biodiversity

But with the rise of industrial agriculture, the health of agroecosystems is no longer considered under the myth of higher productivity and yield per acre.

The globalized, industrialized agrifood system has caused unprecedented destruction thanks to the use of agrotoxins, heavy tilling, GMO monocultures, and mass land-use change.

All causing animals and plants to be under threat of extinction, the soil microbiome to become exhausted, and the degradation of entire ecosystems.

In one century, 75% of genetic diversity disappeared due to monoculture cropping, and uniformity of plant breeding. Today, maize, wheat and rice provide 60% of our daily calories, while only 9 crops make up 66% of total crop production. 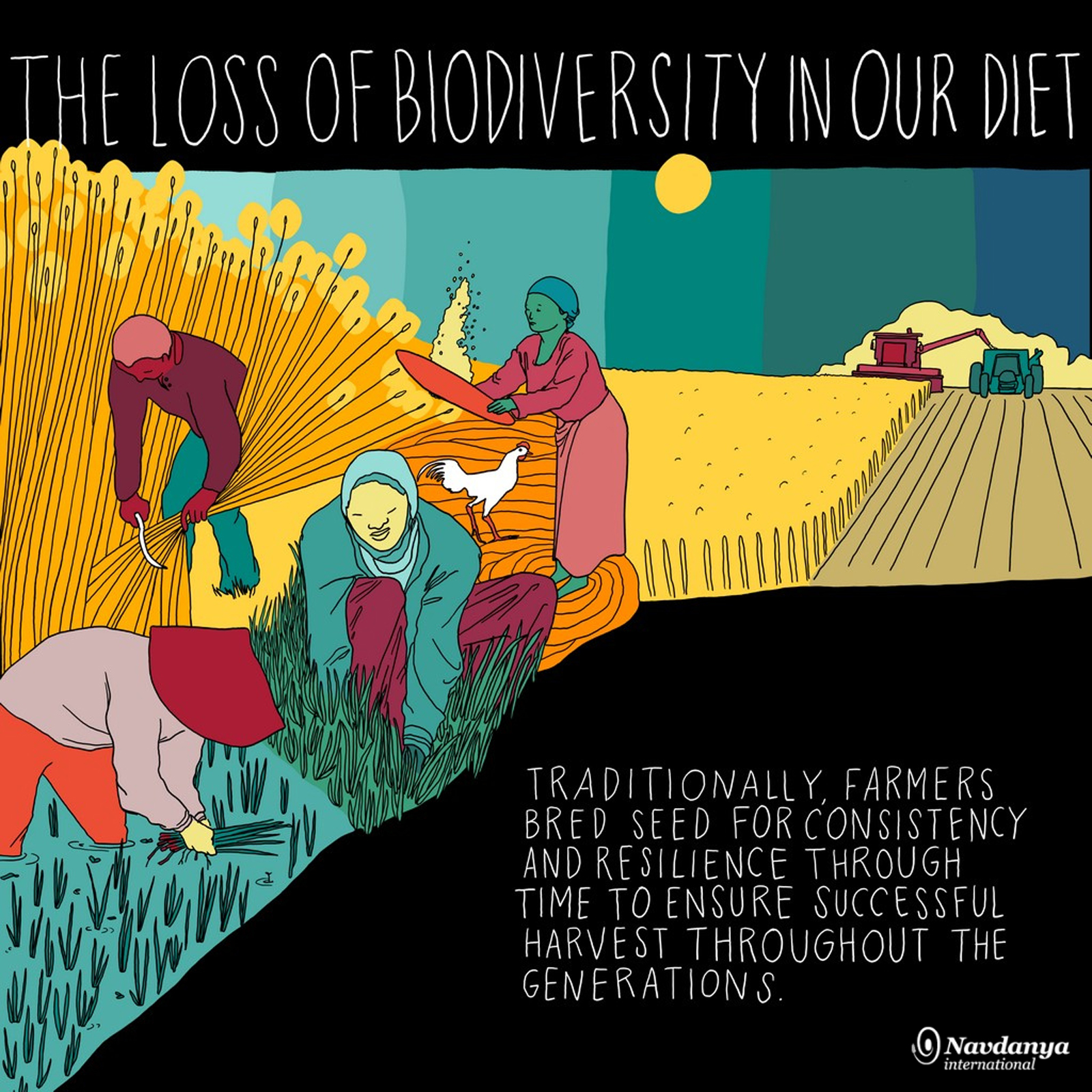 The loss of biodiversity in our diets

This type of industrial seed breeding has led to the replacement of local varieties evolved over centuries with homogeneous, hybrid or genetically modified varieties.

The reduction of biodiversity in diets has led us to consume just over 200 species out of the over 6,000 varieties identified, and the great majority of people are now living off of no more than 12 plant species and five animal species. 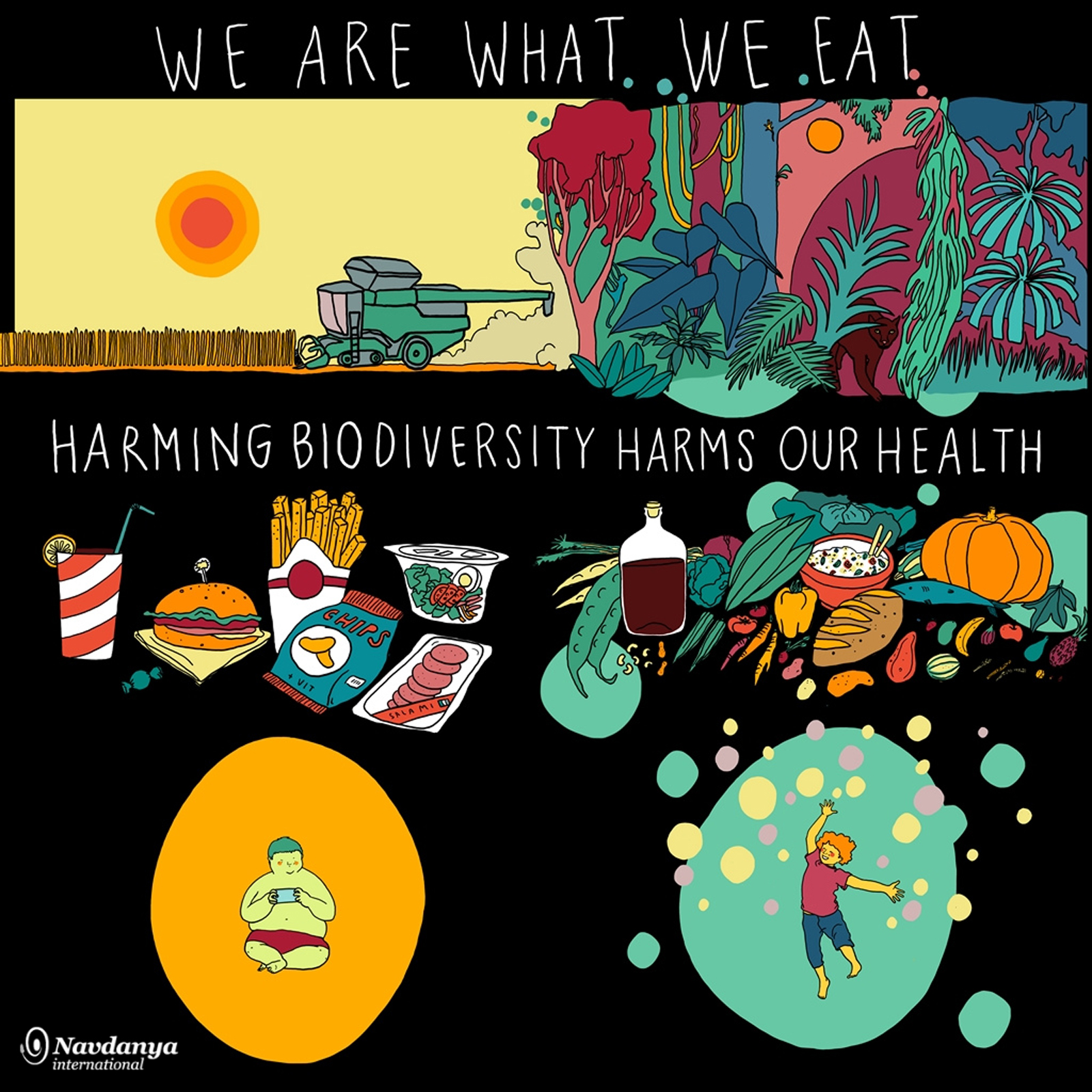 We are what we eat, harming biodiversity harms our health

Therefore, the combination of diets based on industrial, processed food and the degradation of biodiversity at all levels of the food systems have resulted in the depletion of the human microbiome, a lack of basic nutrients, and food being potentially contaminated with carcinogenic and endocrine-disrupting chemicals from agrochemicals, artificial growth hormones, and antibiotic-resistant strains of bacteria.

The huge explosion of non-communicable diseases is directly related to these shifts. 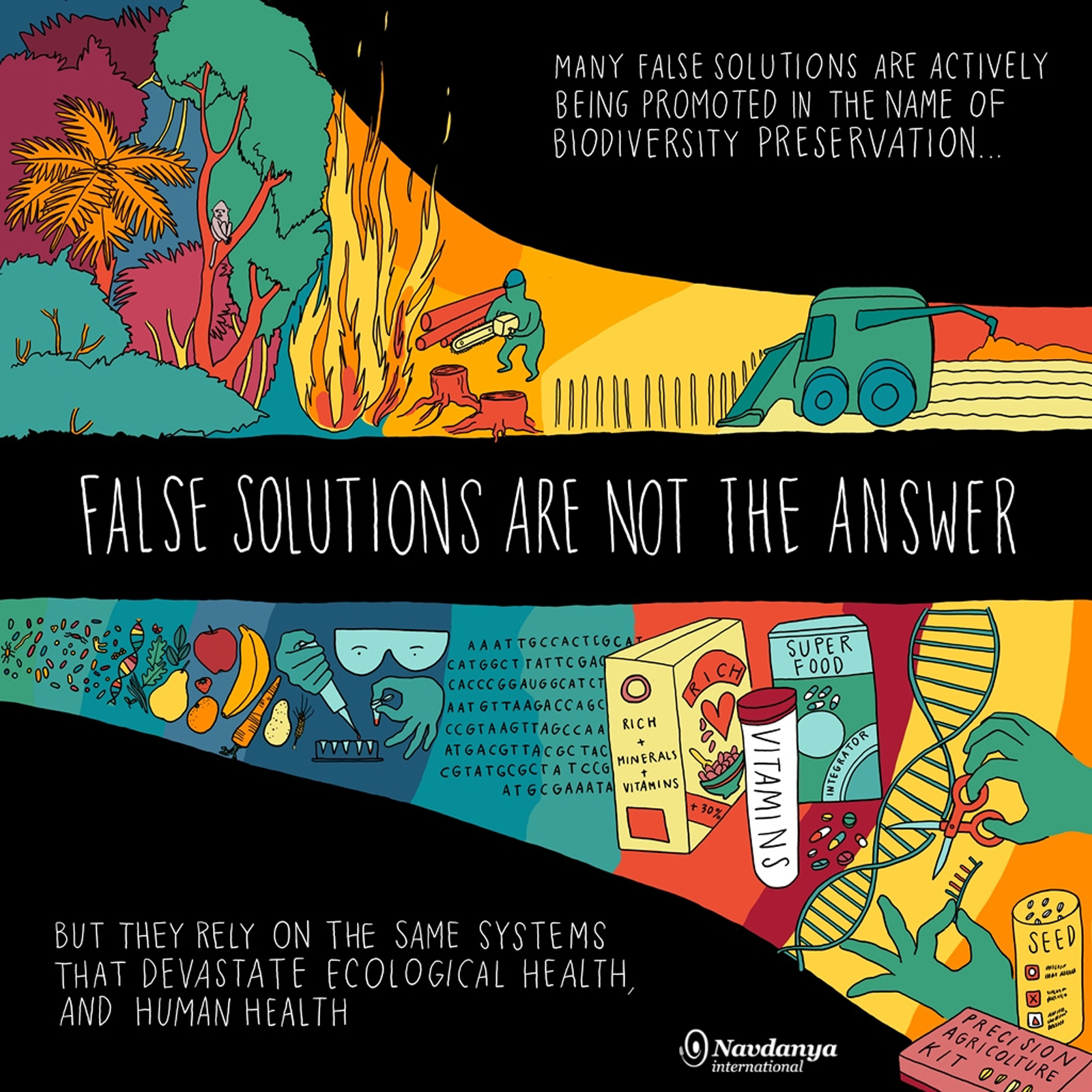 False solutions are not the answer

Despite international recognition of the importance of biodiversity restoration and conservation, biodiversity loss has continued to worsen, with no action taken to curb the industrial agrifood model based on agrotoxins, land degradation, fossil fuels and pollution.

Many false solutions are actively being promoted in the name of biodiversity preservation, such as digital sequencing of genetic information, biofortification for nutrition, a new generation of GMOs and precision agriculture for “sustainable agriculture.”

But these false solutions only reorient us back to industrial agriculture models. 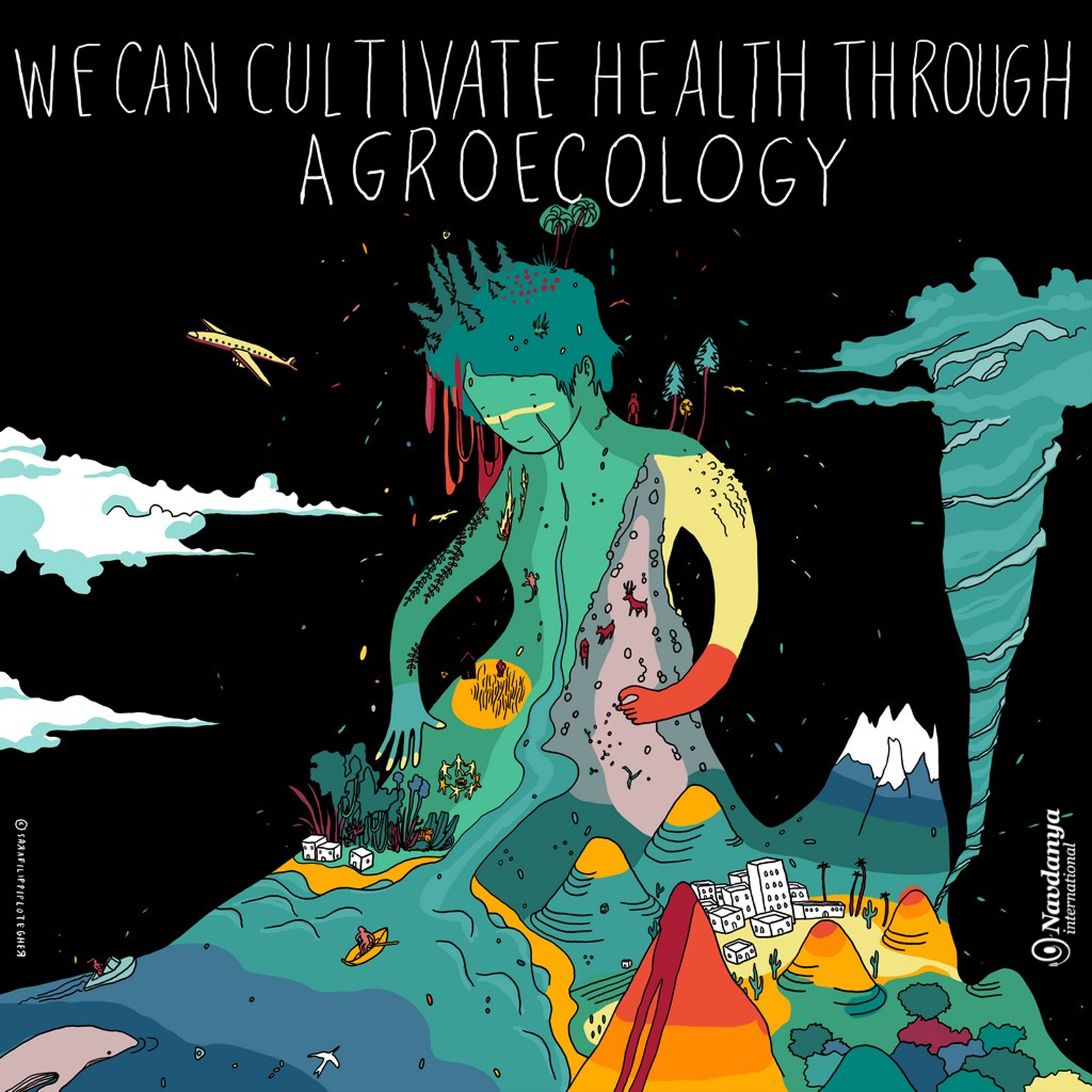 We can cultivate health through agroecology

A biodiversity-based, agroecological food systems transformation, in opposition to the ecologically destructive, globalized food systems, is being advocated for by movements throughout the world in the name of food sovereignty.

Embodying a different vision of what food systems can be, these movements are preserving seeds, soils, biodiversity, agroecosystems and nutrition.

Farmers are stewards of diversity to be passed on through the generations to ensure the long-term resilience of different crops, knowledge, culture and community through recognizing the sanctity of all beings to maintain the web of life.

Humans are part of the food web — as custodians, as co-creators, as eaters, as growers. Food makes us members of the Earth Family. 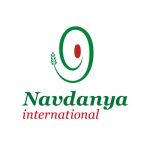