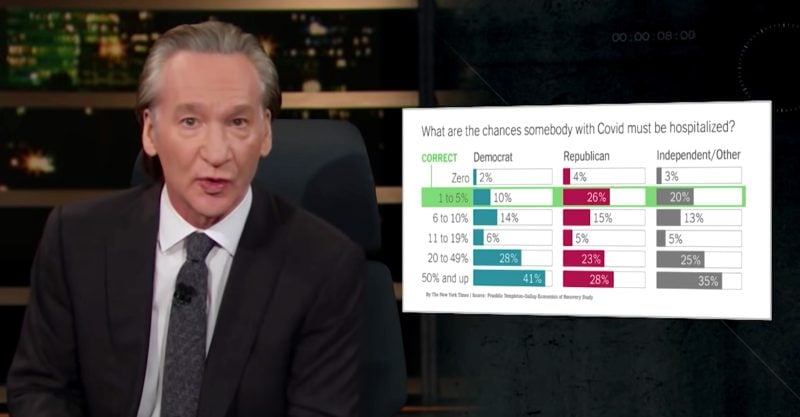 Bill Maher’s latest new rule is this: “Don’t spin me when it comes to my health.”

In the segment below, the political commentator, comedian and host of “Real Time with Bill Maher” accuses the medical establishment, media and the government of taking a “scared straight” approach to getting people to comply with their COVID recommendations.

“When all the sources for medical information have an agenda to spin us, you wind up with a badly informed public,” Maher said.

Not only that, citing figures from the Centers for Disease Control and Prevention, Maher said 78% of people who end up “hospitalized, ventilated or dead” from COVID are obese — something news outlets are “too polite” to talk about.

What the media isn’t hesitant to do is to policitize COVID — a phenomenon Maher said he finds offensive: “I don’t want politics mixed in with my medical decisions.”

In his “New Rule” segment, Maher — whose political views are largely seen as ranging from liberal to libertarian — revealed findings from a Gallup poll showing about 70% of Democrats were “wildly off” on the key question of how many people who get COVID end up being hospitalized. The poll showed liberals have a “greatly exaggerated” view of the danger of COVID, and of the mortality rate among children.

“If the right-wing media bubble has to own things like climate denial,” Maher said, “shouldn’t the liberal media have to answer for ‘how did your audience wind up believing such a lot of crap about COVID’?”