Scientists warned Monday the ice shelf holding back one of Antarctica's most perilous glaciers could shatter in the next three to five years — a development that would threaten millions of people with intensifying sea level rise. 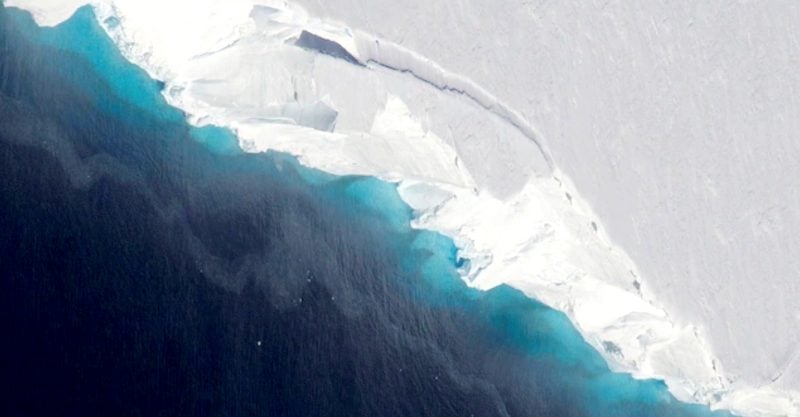 The ice shelf holding back one of Antarctica’s most perilous glaciers is eroding from below due to higher ocean temperatures, prompting scientists to warn Monday that this key reinforcement could shatter in the next three to five years — a development that would threaten millions of people with intensifying sea level rise.

“Until recently, the ice shelf was seen as the most stable part of Thwaites Glacier, a Florida-sized frozen expanse that already contributes about 4% of annual global sea level rise,” the Washington Post reported. “Because of this brace, the eastern portion of Thwaites flowed more slowly than the rest of the notorious ‘doomsday glacier.'”

However, recent satellite imagery shared during Monday’s annual meeting of the American Geophysical Union shows numerous cracks that stretch diagonally across the surface of the floating ice wedge.

Comparing the newly discovered weaknesses to cracks in a windshield, Erin Pettit, a glaciologist at Oregon State University said that “this eastern ice shelf is likely to shatter into hundreds of icebergs.”

Not the headline one most hopes to read…https://t.co/oOjO1TiakI

“The failure of the shelf would not immediately accelerate global sea level rise. The shelf already floats on the ocean surface, taking up the same amount of space whether it is solid or liquid.

“But when the shelf fails, the eastern third of Thwaites Glacier will triple in speed, spitting formerly landlocked ice into the sea. Total collapse of Thwaites could result in several feet of sea level rise, scientists say, endangering millions of people in coastal areas.”

In 2019, a team of researchers estimated that the fossil fuel-driven climate crisis is putting Thwaites at increased risk of hitting a tipping point that could eventually cause sea levels to surge by 20 inches.

The Post reported Monday that even if the newly discovered fractures “don’t cause the shelf to disintegrate, it is likely to become completely unmoored from the seafloor within the next decade” because “the warming ocean is loosening the ice shelf’s grip on the underwater mountain that helps it act as a brace against the ice river at its back.”

Other researchers from the International Thwaites Glacier Collaboration expressed concerns about the so-called “grounding zone,” where the landed portion of the glacier meets the floating shelf, which juts out into the sea and undergoes an accelerated melting process due to relatively warmer water.

Scientists fear that if Thwaites were to lose its protective ice shelf, it “may become vulnerable to ice cliff collapse, a process in which towering walls of ice that directly overlook the ocean start to crumble into the sea,” the Post noted.

Although this process has not yet been observed in Antarctica, University of St. Andrews glaciologist Anna Crawford has developed models indicating that Thwaites — which she called “kind of a monster” — is susceptible to ice cliff collapse, even if it is not likely to occur in the immediate future.

“What we’re seeing is already enough to be worried about,” said Crawford.