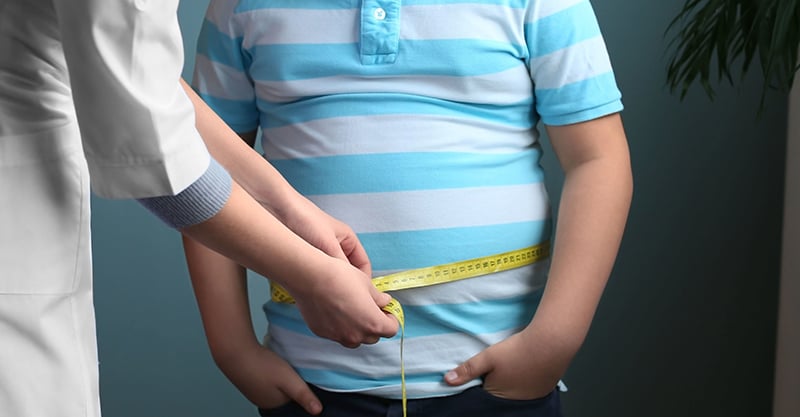 Over the past several decades, the experience of childhood has changed fundamentally for many American children. Impairing their ability to climb trees and run races, over a third are encumbered—at even the youngest ages—with runaway weight and associated sequelae like high blood pressure and, as the CDC has just reported, diabetes. As of 2015-16, about 13.7 million U.S. children and adolescents—roughly one in five (18.5%)—were obese, and another 17% were overweight. Even worse, a third of those classified as obese fell into the category of “extreme obesity.”

In the adolescent age group (12- to 19-year-olds), obesity prevalence—at 21%—has quadrupled since the 1980s, generating $14 billion in annual direct health expenses. Researchers are even more concerned, however, by the worsening picture in 2- to 5-year-olds. Studies show that early-onset weight gain has long-term risks; when children start kindergarten overweight, they are four times more likely to become obese by eighth grade as normal-weight kindergartners. In less than a decade (from 2007-08 to 2015-16), the prevalence of obesity and severe obesity in the 2- to 5-year age group rose from 10% to 14%. In the most recent two-year cycle, this sharp increase in preschool-age children—particularly boys, African Americans and Hispanics—prompted researchers to fret about the obesity epidemic having become “endemic.” At a societal level, experts warn that “The obesity epidemic threatens to shorten life expectancy . . . and bankrupt the health care system.”

The dramatic surge in childhood obesity began in earnest in the late 1980s. Given the growing evidence that environmental chemicals are key obesity triggers, it makes sense to consider what exposures may have increased over the same time period. Vaccines and glyphosate are two culprits that readily come to mind—and published evidence supports a link.

The epidemic of obesity in US children has a statistically significant positive correlation with the number of vaccine doses recommended, with similar trends evident for hypertension and metabolic syndrome.

In multiple papers published over the last decade and a half, immunologist JB Classen has been making the case that “vaccine induced immune overload”—which he also refers to as “iatrogenic immune stimulation”—is a primary cause of the obesity epidemic and other inflammatory disease epidemics. Arguing that a “huge increase” in inflammation-associated disorders has followed on the heels of the “massive increase” in the childhood vaccine schedule, Classen points out that “The epidemic of obesity in US children has a statistically significant positive correlation with the number of vaccine doses recommended,” with similar trends evident for hypertension and metabolic syndrome.

From Classen’s perspective, a “major problem with vaccines is the one dose fits all approach.” In his papers, he points out the following:

According to Classen, the theory of vaccine-induced immune overload is far more biologically plausible than competing hypotheses such as (in the case of obesity) “nutrition overload” or lack of exercise. The immunology expert notes that, contrary to popular belief, inflammation precedes (rather than follows) the development of obesity, and it also boosts the activity of natural steroids that can cause obesity. In addition, specific vaccines are known to cause elevations in proinflammatory proteins that are associated with and predictive of overweight and obesity.

Other researchers have linked in utero exposure to mercury to a higher risk of childhood overweight or obesity. The influenza vaccines routinely administered to pregnant women contain the mercury-based preservative thimerosal.

… link glyphosate to three key biological disruptions … all of which can explain the epidemics of obesity as well as numerous other chronic conditions.

Increasingly, obesity researchers agree with Classen that excess calories and inadequate exercise are “insufficient to account for the observed changes in [obesity and metabolic syndrome] disease trends.” They propose that in utero and early life exposure to synthetic chemicals such as glyphosate and other pesticides may be playing a major role.

As one of the most widely used chemicals in the world, glyphosate (the active ingredient in Roundup) deserves particular attention. MIT researcher Stephanie Seneff and coauthor Anthony Samsel acknowledge the likely contribution of other environmental toxins but argue that glyphosate is the most significant “because it is pervasive and it is often handled carelessly due to its perceived nontoxicity.” Seneff and Samsel link glyphosate to three key biological disruptions—gut dysbiosis, impaired sulfate transport and suppression of a biologically important family of enzymes—all of which can explain the epidemics of obesity as well as numerous other chronic conditions. Insidiously, glyphosate also disrupts the body’s ability to detoxify other environmental toxins, leading to “synergistic enhancement of toxicity.” In addition, Seneff has pointed out elsewhere that glyphosate “has made its way into several widely used vaccines,” and especially the measles-mumps-rubella (MMR) vaccine.

One of the key mechanisms whereby glyphosate may carve out a “path to obesity,” say Seneff and Samsel, is through glyphosate’s impairment of tryptophan synthesis. Tryptophan is an essential amino acid that, when depleted, leads to inadequate serotonin and melatonin in the brain. Ordinarily, serotonin regulates appetite, so “it follows that serotonin deficiency would lead to overeating and obesity.”

As with vaccines, temporal trends in glyphosate use correlate with obesity trends, not just in the U.S. but around the world. Seneff and Samsel state:

The obesity epidemic began in the United States in 1975, simultaneous with the introduction of glyphosate into the food chain, and it has steadily escalated in step with increased usage of glyphosate in agriculture. While it is common knowledge that Americans are continuing to grow more and more obese with each passing year, there may be less awareness that obesity aligns with glyphosate usage elsewhere in the world. For example, South Africa arguably has the highest obesity rates in all of Africa, and it is also the African country that has most heavily embraced glyphosate usage since the 1970’s and has freely adopted genetically modified crops with little regulation.

… proposes that vaccine-induced immune overload may lead to different outcomes in different individuals—explaining the many parallel childhood epidemics we are observing.

Classen’s numerous publications focus not just on obesity but also on other immune-mediated conditions such as diabetes (types 1 and 2) and metabolic syndrome. As a result of his analyses, he makes the crucial observation that the “clinical manifestation of disease depends on one’s physiologic response to inflammation.” Stated another way, he proposes that vaccine-induced immune overload may lead to different outcomes in different individuals—explaining the many parallel childhood epidemics we are observing.

Seneff and Samsel make a similar point about glyphosate and its influence on a long list of chronic diseases, including “autism, . . . inflammatory bowel disease, chronic diarrhea, colitis and Crohn’s disease, obesity, cardiovascular disease, depression, cancer, cachexia, Alzheimer’s disease, Parkinson’s disease, multiple sclerosis, and ALS, among others.” They state, “While genetics surely play a role in susceptibility, genetics may rather influence which of these conditions develops in the context of glyphosate exposure, rather than whether any of these conditions develops.”

Overall, Classen asserts that “vaccines are much more dangerous than the public is lead [sic] to believe,” adding that “The medical industry must take ownership for causing of the epidemics through the inappropriate recommendations and gross over utilization of vaccines.” Seneff and Samsel make a similar critique of glyphosate, postulating that it may be “the most biologically disruptive chemical in our environment” and advocating for immediate action to “drastically curtail” its use.