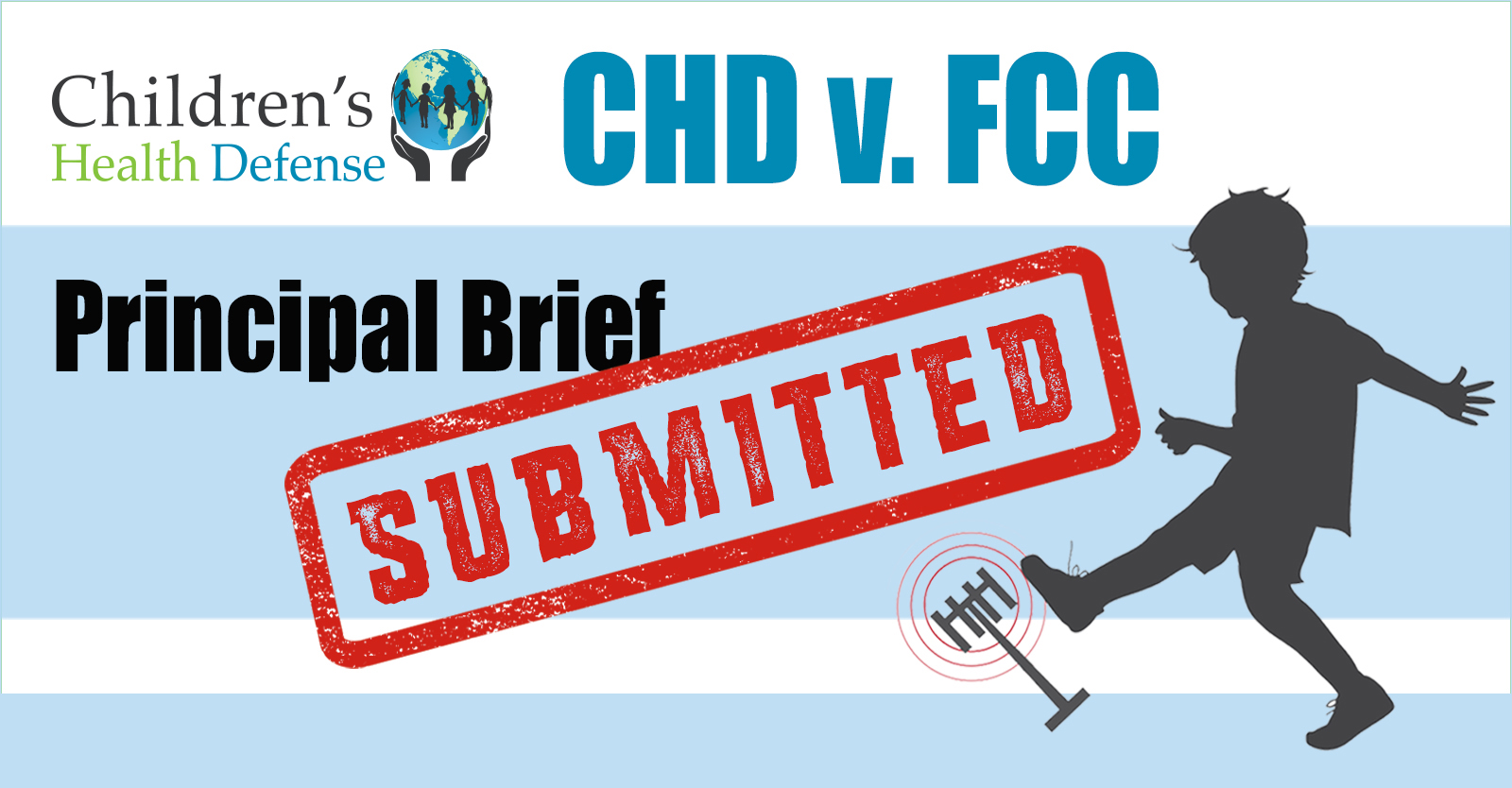 The case challenges the agency’s refusal to review its 25-year-old obsolete wireless “health guidelines” and adopt scientific, biologically based radio frequency emissions rules that adequately protect public health. Robert F. Kennedy Jr., CHD’s chairman and chief legal counsel, said,“We are committed to making our government accountable, and giving a voice to injured children, their parents and doctors, and the scientists who have spoken out for justice on this issue.” Read the Full Press Release

The FCC guidelines ignore human biology and are based on an obsolete, false and disproven scientific assumption that wireless radiation is not harmful unless causing thermal change in tissue. But CHD’s brief proves that scientific and human evidence of harm from wireless and 5G well below thermal levels was presented to the FCC, but  the agency officially closed the docket on the issue last year and ignored all submitted reports. Therefore, CHD contends the FCC’s decision not to review the “health guidelines” is capricious, arbitrary, not evidence-based and an abuse of discretion.

“The most important evidence is the human evidence,” says Dafna Tachover, director of 5G and Wireless Harms Project at Children’s Health Defense. “Those who have been injured and died because of the FCC’s abuse of power, have been invisible to the FCC like the wireless radiation that harms them. The purpose of our case is to make this invisible problem visible.” Read Dafna Tachover’s Affidavit on behalf of the CHD

The petitioners in the case include parents of children injured, including a mother whose son died from a brain tumor from cell phones and cell tower exposure, Virginia Farver, who stated, “If the FCC does its job now perhaps other mothers will not experience the pain and suffering I face every day. But the public is being told there is no evidence of harm, that these devices are safe.” When a Petitioner in this case, Michele Hertz, developed Microwave Sickness and contacted the FCC to seek help, the man she spoke to responded, “We don’t deal with humans, only frequencies.” and hung up.

Petitioners in this case also include physicians who see the epidemic of sickness in their clinics daily, like Dr. David Carpenter, a renowned professor, scientist and public health expert, who reports,  “The scientific consensus is that the FCC guidelines have no validity and are causing widespread illness and death,” Prof. David Carpenter is the director of the Institute for Health and Environment at the University of Albany and co-editor of the BioInitiative Report, the most extensive review of the science on wireless health impacts written by 29 of the world’s leading scientists.

The outdated and  false guidelines have enabled the uncontrolled proliferation of wireless technology, including 5G. The fast-tracked deployment of 5G will exponentially increase the forced exposure to this proven harmful radiation with 800,000 more cell towers, 50 billion devices that will be wirelessly interconnected and 1,000,000 on the ground antennas to communicate with 50,000 satellites.

In its decision not to review the guidelines, the FCC also astoundingly dismissed the results of the U.S. Food and Drug Administration’s funded National Toxicology Program study, a $30 million, 10-year study that was supposed to give the American people the final answer as to whether or not wireless is harmful. This study, the largest of its kind, found “clear evidence” of cancer and DNA damage. The results should have put to rest the notion that non-ionizing radiation cannot break DNA. The World Health Organization already classified wireless radiation as a “possible” (2B) carcinogen in 2011. The National Toxicology Program study is the “missing link” needed to classify it as a human carcinogen. Courts, including Italy’s Supreme Court, already determined that cell phones cause brain tumors.

If you would like to support this litigation by making a donation, please visit CHD’s Donate page, and under “Funding Options” choose “Stop 5G”. Thank you for your support!