Vaccines can cause autoimmune diseases

Yes, vaccines do cause autoimmune diseases. It’s no secret. The government has known this for decades and has even published books and reports about it.

Government Scientists Have Known This for Decades – Arthritis Example

In 1991, the government’s own Institute of Medicine released a report entitled “Adverse Effects of Pertussis and Rubella Vaccines”.  In that report, the committee stated that the evidence indicates a causal relation between the rubella vaccine and acute and chronic arthritis in adult women. They said:

“The evidence indicates a causal relation between the currently used rubella vaccine strain (RA 27/3) and acute arthritis. Incidence rates are estimated to average 13 to 15 percent among adult women following RA 27/3 immunization with much lower levels noted among children, adolescents, and adult men.”

There are many types of arthritis and some are considered an autoimmune disease. These include:

The authors did not discuss the types of arthritis in their study. The government researchers simply lumped everyone into “acute” and “chronic” arthritis. These are categories that are seldom used alone anymore. They concluded that both types could be caused by vaccines.

Government Scientists Have Known This for Decades – Guillain-Barré Example

That same 1993 report found that “The evidence favors acceptance of a causal relation between OPV and GBS.”  OPV is oral polio vaccine.

The results of this report were summarized in the Journal of the American Medical Association (JAMA):

“Molecular mimicry and bystander activation are reported as possible mechanisms by which vaccines can cause autoimmune reactions.” 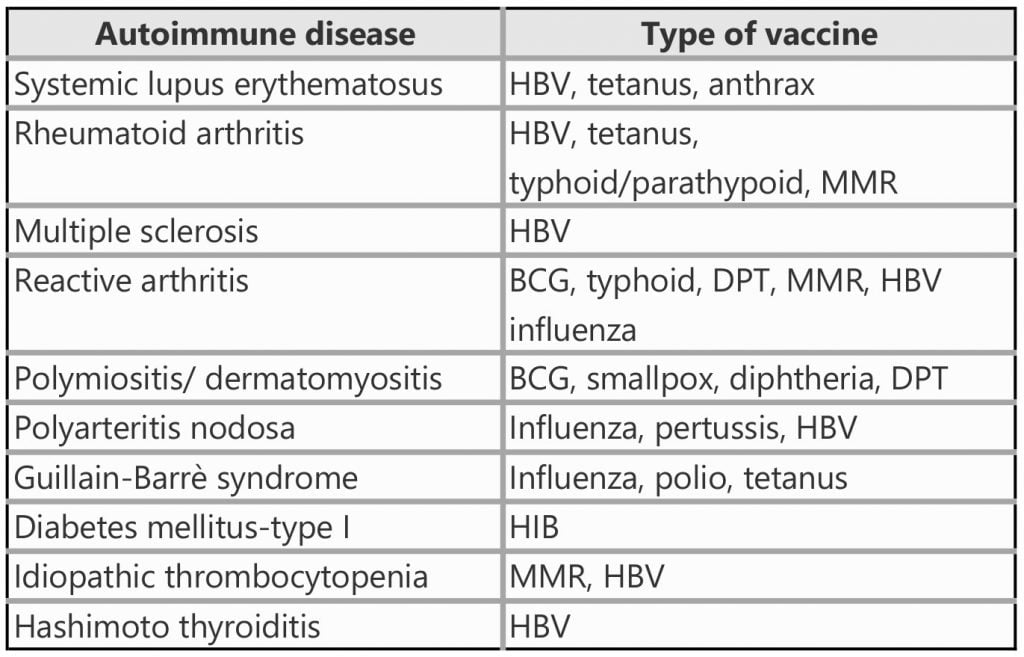 Skyrocketing Rates of Some Autoimmune Diseases

Here are the rates of some auto-immune diseases. The data is often difficult to obtain.  When we reached out the CDC we were told there is no comprehensive database tracking the increasing rates of the various autoimmune diseases.  Strange.

Incidence Trends of Type 1 and Type 2 Diabetes among Youths…

Rates of new diagnosed cases of type 1 and type 2 diabetes on the rise among children, teens

Rate has nearly doubled in one generation.

The incidence and prevalence of reported multiple sclerosis

The prevalence of MS in the United States

Almost a 70% increase in one generation.

Incidence and Prevalence of Crohn’s Disease and Ulcerative Colitis…

The epidemiology of Guillain-Barré Syndrome in U.S….

The epidemiology of Guillain-Barré syndrome

Sarcoidosis in America. Analysis Based on Health Care Use

50 Million Americans Have an Autoimmune Disease

The following is from the Foreword to book the The Autoimmune Epidemic by Douglas Kerr, M.D., Ph.D. (emphasis added)

“There is almost universal agreement among scientists and physicians that the environmental toxins and chemicals to which we are increasingly exposed are interfering with the immune system’s ability to distinguish self from non-self. Most of the risk of autoimmunity comes from environmental exposures rather than from genetic susceptibilities. So, have those environmental exposures changed over time? The answer is clearly yes. One example of this comes from a 2003 study in which blood and urine samples from Americans were tested for 210 substances, including industrial compounds, pollutants, PCBs, insecticides, dioxins, mercury, cadmium and benzene. The volunteers, none of whom had any occupational or residential risks for such exposure, had detectable levels of 91 of these. In other words, these are ordinary people with ordinary lives who have numerous toxins in their body from ordinary exposure. In a 2005 study, researchers found 287 industrial chemicals, including pesticides, phthalates, dioxins, flame-retardants, and the breakdown chemicals of Teflon, in the fetal cord blood of ten newborn infants from around the country—transmitted to the infants by their mothers’ exposures before and during pregnancy.

Note: Mercury is in some vaccines.

This is from “Autoimmune Disease: Why Is My Immune System Attacking Itself?” published on the the Johns Hopkins University website. (emphasis added)

“When the body senses danger from a virus or infection, the immune system kicks into gear and attacks it. This is called an immune response. Sometimes, healthy cells and tissues are caught up in this response, resulting in autoimmune disease.”

Note: Vaccines are designed to create an immune response.

This is from Theories of Causality: the Role of Infections published on the Johns Hopkins Medicine website

“Many of the theories about the causes of autoimmune diseases invoke a preceding infection (such as a viral infection) as the initiating factor.”

Note: Vaccines are designed to cause an attenuated infection to evoke an immune response.