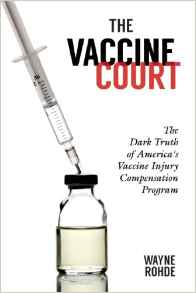 A hard look at the National Vaccine Injury Compensation Program and the families desperately trying to navigate their way through it.

This book is about the National Vaccine Injury Compensation Program—the vaccine court—from the perspective of families who have experienced firsthand vaccine-related injuries and death and who have filed petitions with the program. The National Childhood Vaccine Injury Act of 1986 (NCVIA) established a no-fault compensation system for vaccine-related injuries or death linked to childhood vaccinations. Several years later, the program would be extended to include vaccinations received by adults. Under this no-fault system, a $0.75 excise tax on each antigen component of a vaccine covered by the program goes into a trust fund account known as the Vaccine Injury Trust Fund.

In this book, I will attempt to highlight and convey the stories of several families who have filed petitions with the NVICP, some of whom won compensation and many of whom have had their cases dismissed. I will discuss some meaningful developments of the NVICP, how the vaccine court handles petitions, the special masters who make decisions on the petitions, and Department of Justice (DOJ) attorneys who defend the government position (the Respondent). I will attempt to present legal decisions in plain English, and I will show how those decisions affect both adults and the parents of vaccine-injured children who have to deal with the process of filing petitions, handle the ongoing process of worrying about the fate of their petition, all amid the constant daily routines of providing care for their children and family members.

The Vaccine Injury Trust Fund provides compensation for victims of vaccine-related injuries and death plus attorney fees and medical expert fees. The ability to sue a vaccine manufacturer directly is not permitted in the United States. Petitioners submit claims of injury or death to the NVICP. When the NVICP was first established, injured parties were required to file petitions with the program and then, if not satisfied with the outcome, they could exit the program and file civil tort-related suits in state or federal court. However, since 2011, the US Supreme Court, ruling in Bruesewicz v. Wyeth Labs, eliminated the option, as established by Congress, to exit the program and file suit against the vaccine manufacturer.

Prior to the establishment of the NVICP, parents of children who suffered vaccine-related injuries or death would seek remedy or compensation by filing suit in state or federal court lawsuits. As more vaccines were introduced in the 1970s and 1980s, an increase in vaccine-related injuries and death led to a corresponding increase in vaccine-related tort filings which, due to the cost of litigation, led to a greater threat to the nation’s vaccine supply. The diptheria-pertussis-tetanus (DTP) vaccine illustrates the problem manufacturers were having, resulting in their leaving the market, due to presumed high litigation costs and lack of liability insurance, or at least threatening to do so.

Congress passed the NCVIA of 1986 to address the problems that lawsuits presented for both the vaccine manufacturers and, more importantly, the families of injured children. Congress established the program as no-fault compensation to allow petitioners to file claims without having to prove fault on part of the manufacturer. Their petitions are adjudicated in the federal court system known as the Court of Federal Claims.

Also included in the NCVIA was the establishment of the Vaccine Adverse Event Reporting System (VAERS). Congress mandated that health professionals and vaccine manufacturers report specific adverse events that occur after the administration of the vaccine. In 1993, then FDA Commissioner David Kessler, MD, published a report in the Journal of the American Medical Association that stated physicians failed to report up to 99 percent of all serious adverse reactions to vaccines and medications.

Under the NCVIA, successful petitioners are entitled to compensation for 1) pain and suffering and emotional distance distress not to exceed $250,000; 2) loss of earnings; 3) non-reimbursable medical expenses and; 4) in the case of vaccine-related death, an award up to a cap of $250,000. Petitioners may file either an on-table or off-table claim for vaccine-related injury. On-table claim refers to petitions in which the child receives a program-covered vaccine and experiences an injury listed in the vaccine injury table within the associated time. An off-table claim, by contrast, is filed in response to an injury, disease, or medical condition that is not listed in the table in relation to the received vaccine. Petitioners who file off-table claims bear the burden of proving by a preponderance of evidence that the vaccine was the cause of the injury or symptoms.

In areas of medical uncertainty, where it is equally probable that the vaccine or another factor caused the injury, the presumption should be for the petitioner and compensate the child’s injuries. Most descriptions of the program start with a no-fault compensation program. But in the reality of today’s setting, the NVICP is not a no-fault system, but an adversarial, highly litigious court process that Congress intended to stay away from.

Once a petition has been filed, the office of the Division of Vaccine Injury Compensation (DVIC), an agency within the Health Resources and Services Administration, will review and file a Rule 4 report with the court outlining the respondent’s legal position and medical interpretation of the filed petition. DOJ attorneys representing the respondent may offer a settlement to be negotiated with the petitioner, concede the injury or death and offer damages, or recommend the court to dismiss the petition. A special master will oftentimes review the Rule 4 report and the petition, conduct teleconference calls with attorneys representing both the petitioner and the respondent, review medical literature, and conduct hearings with medical experts from both sides, all to reach a logical conclusion and publish a decision for compensation or dismiss the petition.

The current standard for proving causation in cases involving off-table injuries comes from the landmark case that was decided in 2005, Althen v. HHS. This decision finally provided petitioners more equitable means to prove causation. Prior to Althen, the court was inconsistent in its decisions, starting with nearly a blank slate from Congress on how to determine and adjudicate off-table injuries. Some of the early cases were very punitive toward petitioners and created an undue burden regarding causation. Under the Althen standard, petitioners must demonstrate causation by providing 1) a medical theory causally connecting the vaccination and the injury; 2) a logical sequence of cause and effect showing the vaccination was the reason for the injury; and 3) an approximate temporal relationship between the vaccination and the injury.

A petitioner who demonstrates all three prongs, or standards, of the Althen test is entitled to recover damages unless the respondent shows, also by a preponderance of evidence, that the injury was, in fact, caused by factors unrelated to the vaccine.

Protecting your identity and that of your family’s is a high priority for most Americans. In the NVICP, this has become one of the most contentious issues. The Vaccine Act allows a special master, or a judge, to redact certain information from any decision, opinion, or order. Yet even the most generous decision in favor of the petitioner has not gone far enough to protect personal information from being invaded by those individuals and organizations that use this information to intimidate petitioners and discourage the filing of petitions with the NVICP.

As of March 2014, there have been over 15,100 petitions filed with the NVICP; only 3,500 petitions have been awarded compensation; nearly $2.8 billion has been paid to petitioners and their attorneys, and the balance of the Vaccine Injury Trust Fund is somewhere north of $3.4 billion and growing each year.

Bio: Wayne Rohde is the father of Nick Rohde, a vaccine-injured child who regressed into severe autism after receiving his first set of childhood vaccinations. He lives in Woodbury, Minnesota.