An Unfortunate Coincidence: A Mother’s Life inside the Autism Controversy 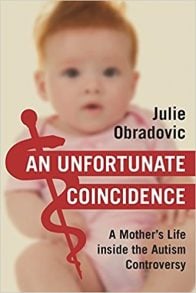 In her poignant account, Julie Obradovic discusses her heart-rending struggle with her daughter’s autism and her subsequent quest for answers. She reveals the feelings of depression and helplessness brought on by the diagnosis and her initial inability to find help. Unwilling to give up, however, Obradovic began fighting, finding a treatment for her daughter and going on to campaign on behalf of others. An Unfortunate Coincidence is the result of this fight. The account takes its readers through the political, historical, and scientific developments behind the greatest medical controversy of our time, including:

Ultimately, An Unfortunate Coincidence will ask the readers to take a closer look at the evidence uncovered by ten years of research and decide just how many coincidence claims they are willing to accept.