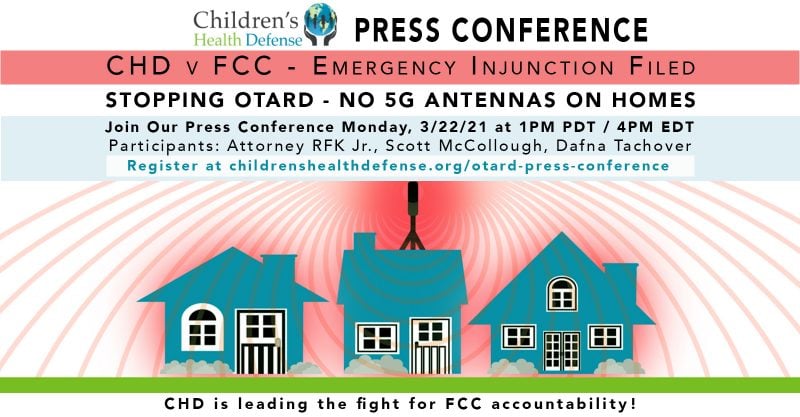 On March 18, Children’s Health Defense (CHD) filed a motion for emergency relief with the US Court of Appeals for the DC Circuit, asking the Court to stay the Federal Communications Commission’s (FCC) Over-the-Air Reception Devices” (OTARD) Rule Amendment, before it goes into effect on 3/29/21. The motion is part of CHD’s case that was filed on 2/26/21, challenging the rule amendment.

The amended rule allows property owners to place fixed wireless antennas on their property and, for the first time, to extend wireless data/voice services, including 5G, to users on neighboring properties. The rule purports to facilitate mesh Wi-Fi networks, 5G, and the deployment of the ground infrastructure for SpaceX satellites.

To that end, the amended rule allows the installation of radiation-transmitting antennas on homes while preempting all state and local zoning authority. No permit is required, and homeowners’ associations, deed restrictions, and any other state laws are preempted.

The focus of the motions is the preemption of federal and state civil rights laws that protect the disabled and their rights for accommodations. People who are adversely affected will have no right to object to their installation, even though they will be involuntarily exposed to harmful radiation in their homes.

The Movants (Petitioners) claim that if the amended rule goes into effect, they, and any others who develop Radiation Sickness (Electrosensitivity), or other sickness caused/aggravated by wireless technology radiation, may suffer irreparable harm and life-threatening injuries.

CHD argued that Petitioners are likely to prevail on the merits because the amended rule violates substantive and procedural due process rights, it is unlawful and contrary to the public interest. Therefore, and because of the imminence of the harm, the Court should grant the stay pending a final decision in the case.

The motion was supported by three experts, including Prof. Beatrice Golomb MD. PhD., whose paper showed that the “Mystery Sickness” suffered by US Diplomats was likely caused by pulsed radio-frequencies, the same condition suffered by the Petitioners from wireless technology. Prof. Riina Bray MD Medical Director, Environmental Health Clinic, Women’s College Hospital in Toronto that specializes in Radiation Sickness diagnosis, and Dr. Toril Jelter MD a Pediatrician in CA, filed the other two expert opinions.

The Court appointed a three-judge panel to decide on the motion, composed of Judge Judith W. Rogers, Judge Robert L. Wilkins, and Judge Neomi Rao. The court ordered the FCC to file its response by 3/23/21. CHD will be able to file a reply to the FCC’s response on 3/24/21. A decision is expected before 3/29/21 when the rule is supposed to go into effect.

“Grave and immediate harm and injustice that will be caused to many including children if this rule goes into effect. For those who are sick, this motion is literally a battle for their right to exist, says said Dafna Tachover, CHD’s Director of its Wireless Harms and 5G Project.