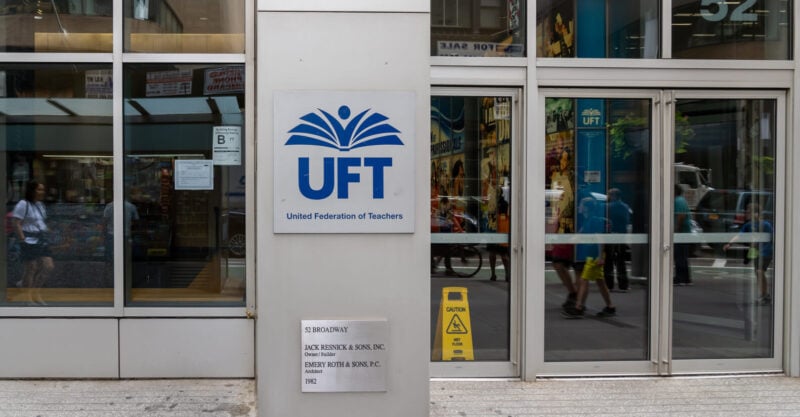 New York, NY — On Oct. 4, fired New York City teacher and Children’s Health Defense (CHD) grassroots organizer Michael Kane interviewed American Federation of Teachers (AFT) union president Randi Weingarten on Good Morning CHD. The interview followed an earlier encounter that Kane had with Weingarten at the Sept. 10 Labor Day parade in NYC when he posed questions to the union leader regarding educators being fired over vaccine mandates. Weingarten did not engage with Kane at that time but agreed to be a guest on his CHD.TV show to discuss her stance on vaccine mandates for educators.

Weingarten, whose union represents 1.7 million educators nationwide, was the first labor leader in America to publicly endorse vaccine mandates for union members. “This is the type of arbitrary and reckless requirement we’ve seen proliferate over the past two years,” said Kane. “It’s ironic and frightening that someone in Weingarten’s position has the power to influence what should be the private healthcare decisions of those who pay her salary.”

In her interview with Kane, Weingarten walked back some of her earlier enthusiasm for requiring vaccines for teachers. In addressing NYC Mayor Eric Adams’s actions lifting only private-sector mandates, Weingarten commented that, “What Adams did was unfair. If you’re lifting the vaccine mandates in the private sector, you have to treat the public sector employees in a similar way. You can’t treat one set of employees different than another set.”

As of last month, nearly 2,000 NYC school employees had lost their jobs for not receiving the COVID-19 shot. While Weingarten noted, “There should be a reconsideration process going forward,” for the fired teachers, she declined to say whether she would support reinstating them with back pay.

Weingarten fully defended the vaccine mandate implementation in August of 2021 for educators and said she would “do it again” if public health officials deem it necessary.

Kane, an NYC special education teacher for more than 14 years and founder of Teachers for Choice, is suing NYC over the loss of his position because of the COVID-19 vaccine mandate. Kane v. de Blasio is headed to the 2nd Circuit Court of Appeals on Oct. 11, at the Thurgood Marshall Federal Courthouse in Manhattan. The case has been consolidated with two other cases, Keil v. NYC and New Yorkers for Religious Liberty (NYFRL) v. NYC. All of these cases charge that the city of New York violated the constitution by arbitrarily denying thousands of religious exemptions to vaccination for both public and private employees. CHD is co-council on both Kane and NYFRL and is providing financial support for the cases.