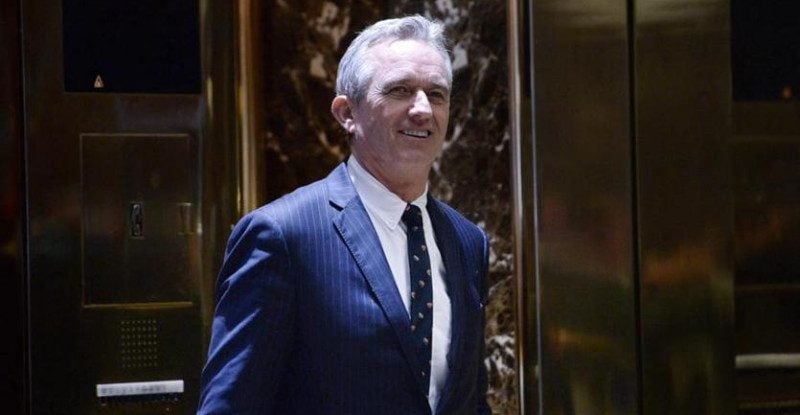 On January 10th, following a month of quiet negotiations with his transition team, Donald Trump asked me to chair a commission to investigate vaccine safety.  A predictable firestorm of protest greeted the announcement.  Hundreds of media outlets denounced me as “anti-vaccine” – or worse – and condemned the existence of any commission that would comprehensively examine the safety of our rapidly expanding vaccine regimen.

Let’s be frank.  My ten-year advocacy for vaccine safety has been a miserable career choice. It has damaged my credibility, angered journalists and bewildered my friends. It’s cost me income and my standing among many of my colleagues in the environmental community.  Even my closest allies wondered how I could make common cause with President Trump, whose policies and appointments are eviscerating 33 years of my work on energy, water and climate.

I want vaccines that are as safe as possible, with robust, transparent science and vigorous oversight by independent regulators who are free from conflicts-of-interest.

Contrary to the pejoratives applied against me by my critics, I am pro-vaccine. I had all my children vaccinated and I support policies that promote vaccine coverage.

I want vaccines that are as safe as possible, with robust, transparent science and vigorous oversight by independent regulators who are free from conflicts-of-interest.  These goals are consistent with core liberal values that encourage healthy suspicion when government mandates entwine with corporate self-interest.

Many Americans don’t know that the U.S. childhood vaccine schedule has more than tripled since the late 1980s, when Ronald Reagan’s bill, giving vaccine makers immunity from lawsuits, triggered a gold rush by pharma to add new vaccines to the CDC recommended schedule.  With downside liability eliminated and $30 billion in annual revenues up for grabs, the vaccine regimen exploded from the handful I received to over fifty doses of 15 vaccines children receive today.

The CDC acknowledges that an astonishing one in six American children now suffers from a neurodevelopmental disorder while an HHS funded study showed that 43% have a chronic disease, including allergy, juvenile diabetes and seizures.

The CDC acknowledges that an astonishing one in six American children now suffers from a neurodevelopmental disorder while an HHS funded study showed that 43% have a chronic disease, including allergy, juvenile diabetes and seizures.  These outbreaks – including the explosion of deadly food allergies that my own children suffer became epidemic, coterminous with the dramatic expansion of the vaccine schedule. EPA scientists studying the history of the most concerning neurodevelopmental disorders have confirmed this timing. Peer-reviewed literature associates many of these illnesses with aluminum and mercury; mercury and aluminum exposure levels from vaccines rose dramatically beginning in the late 1980s.

Because of the correlation in timing, the expanded vaccine schedule must be regarded as a suspect in the epidemic of chronic childhood diseases.  Shouldn’t we do the research necessary to rule out that hypothesis?  Wouldn’t that information help us develop safer vaccines?

It’s not just the billions of pharmaceutical advertising money that has silenced news divisions, many journalists genuinely fear that open discussion of vaccine safety will reduce vaccination rates and harm public health.

But fighting this issue has been like battling an army of ghosts.  I’ve found myself enduring an endless barrage of misleading attacks from critics ranging from internet trolls to mainstream media anchors, virtually all unanswered; debate on vaccine safety is a Kafkaesque taboo on network news channels or on the editorial pages of America’s newspapers, many of which have financial ties to drug companies.  It’s not just the billions of pharmaceutical advertising money that has silenced news divisions, many journalists genuinely fear that open discussion of vaccine safety will reduce vaccination rates and harm public health.  Some openly advocate censoring the topic.

Instead of fact-based debate, we’ve devolved into “argument by insult”.  By reducing the issue to a binary choice – you’re either pro-vaccine or anti-vaccine – we are silencing discussion of a complex but critical issue.  Instead of adopting the traditional liberal posture of skepticism toward powerful agglomerations of business and government, progressive journalists lump me in with crackpots and conspiracy theorists and, thereby, dodge the need to read the science or answer legitimate questions.  Major news outlets routinely refuse to cover this issue.

I entered the vaccine debate reluctantly. During the early 2000s, I was litigating over a dozen lawsuits challenging mercury emissions from coal burning power plants. As I travelled around the nation, mothers of intellectually disabled kids frequently urged me to look at mercury in vaccines which they believed had injured their children. These women did not fit the popular stereotype of the anti-vax hysteric. Many were doctors, lawyers, nurses, pharmacists and psychologists. I was not prepared to simply dismiss their concerns as irrational hysteria.

I was struck by the vast delta between the dire reports of [thimerosal’s] profound toxicity described in the peer-reviewed literature and the blithe safety assurances that were orthodoxy in the press and among the public health agencies.

As I began reviewing the studies on thimerosal -the mercury based vaccine preservative still used in massive doses in 48 million flu shots administered in America, including to babies and pregnant women – I was struck by the vast delta between the dire reports of its profound toxicity described in the peer-reviewed literature and the blithe safety assurances that were orthodoxy in the press and among the public health agencies.  That’s when I became persuaded to speak out publicly against the continued use of mercury in vaccines.

The evidence has only piled up since then.

That study demolished the CDC’s age-old justification for leaving thimerosal in vaccines; there is no “good mercury” and “bad mercury” as the CDC has long claimed.   In my book, Thimerosal, Let the Science Speak, my co-authors and I were able to identify over 400 peer-reviewed studies supporting thimerosal’s extreme toxicity.  We were not able to find a single study showing thimerosal’s safety.  In 2004, Dr. William Egan, then the Director of CBER at the FDA testified before Congress that no adequate safety study of thimerosal had ever been performed.

Against this backdrop of evidence, is a commission ensuring that vaccines are as safe as possible really a bad idea?

Critics may point out that the CDC already houses one body with responsibility to assure vaccine safety and efficacy – the Advisory Committee on Immunization Practices (ACIP).  But blistering investigations by Congress and the HHS Inspector General have found that both the CDC and the ACIP are rife with financial conflicts of interest with the $33 billion vaccine industry, and that the CDC’s and the ACIP’s ethics programs are riddled with abuse and non-compliance.

In fact, over a dozen CDC scientists have recently accused the agency of politicizing science and pervasive research fraud.  The CDC’s senior vaccine safety scientist, Dr. William Thompson, says that CDC supervisors have ordered him and his fellow vaccine research scientists  to manipulate, bury and destroy data and publish falsehoods to conceal adverse effects of vaccines.

To date, the U.S. government vaccine court has paid out more than $3.36 billion to Americans injured by vaccines.  An injury table maintained by the Department of Health and Human Services clearly details the long parade of disturbing ways a child can be injured or killed by a vaccine.  In August 2011, the U.S. Government’s Institute of Medicine investigated 158 potential adverse outcomes from vaccines. Of these, 85% were found to have inadequate research to accept or reject a causal association. Of the 23 outcomes where the research was deemed adequate, 18 or 78% were found supportive of harm. Among the long list of adverse effects linked to vaccines were immune dysfunction, seizures, paralysis and encephalopathy (brain damage).  These statistics are hardly reassuring to parents.

As responsible citizens in a democracy, our job is to weigh the scientific evidence and to conduct open conversations about the true risk/benefit of each vaccine. The cacophony of name calling and vilification does not contribute to informed debate that we need to assure vaccine safety.

Dr. Peter Doshi, Associate Editor of the British Medical Journal, recently published an editorial seeking balance and honesty in discussing vaccines; his words should be heeded by anyone railing against ensuring vaccines for our children are as safe as possible: “Contrary to the suggestion – generally implicit – that vaccines are risk free (and therefore why would anyone ever resist official recommendations), the reality is that officially sanctioned written medical information on vaccines is – just like drugs – filled with information about common, uncommon and unconfirmed but possible harms…It’s time to listen – seriously and respectfully – to patients’ concerns, not to demonize them.”

The American public is entitled to an honest, probing and robust discussion about this critical public health issue – a debate based on facts, not rooted in fear, nor on blind faith in regulators and the pharmaceutical industry.