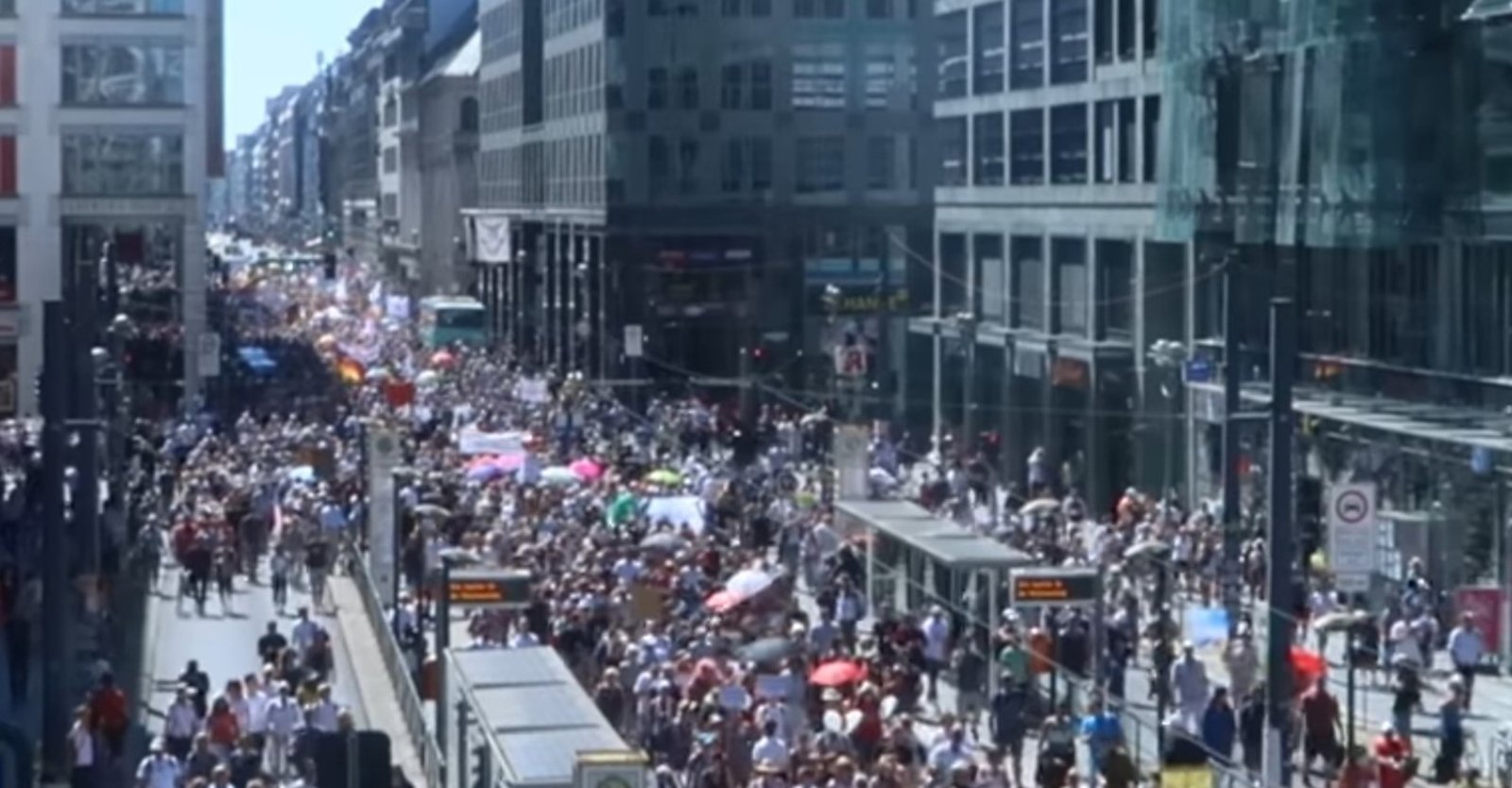 A Letter From a Friend in Germany

As you have already heard, there was a massive protest in Berlin August 1, 2020. I have been waiting to report on it until I had a complete picture about it and what happened afterwards.

Health freedom was a big part of the protest —  more and more people are waking up to the fact that they do not want to be guinea pigs for Gates’ experimental vaccine. But it was also mainly about our freedom and human rights, against draconian measures put on us by the government, against lockdown, social distancing and masks.

The numbers that were reported vary greatly. The mainstream media in collusion with the Berlin mayor tried everything to cover up and lie about it. They snapped a picture of the “protest” in the early morning, many, many hours before it actually began and used this picture to say there were “17,000 people” at the protest. The mayor himself told police that the people were acting “against the democratic principle” (?) and ordered police to end it. Mainstream media proclaimed many hours before the protest that it was made up of a few crazy “Nazis, conspiracy theorists and corona-deniers” then dispersed by the police.

People – normal people—concerned citizens, mothers, fathers, grandmothers, grandfathers, doctors, lawyers, business owners – streamed to Berlin by the hundreds of thousands—the official numbers from the police were 800,000 to 1.3 million, with 2-3 million people in the general vicinity.

People attending said that the energy was unbelievable and felt like “a bomb of light and love and peace and freedom” had exploded in Berlin.

In the afternoon, police came to end the protest, because “people hadn’t been adhering to distancing and wearing masks.” (Apparently this hadn’t been a problem at the BLM demos in Germany, but I guess it matters now what exactly you are protesting.) The other thing “they” did in Berlin was to interfere with everyone’s phones and cameras, so that it seemed like the protest could not be live-streamed to contradict the media narrative. But one of the organizers came from Switzerland, and his phone, for some reason, was not affected. So he live-streamed the whole protest. Even now, there is massive censorship on Youtube about the real protest images and facts.

Many hours after mainstream media had already announced it, police actually did end the protest by cutting off electricity and carrying the organizers and speakers off the stage. Two of them were arrested later, as well as some protestors, but everyone was set free, as the police had no grounds to hold them. Two lawyers co-organized the protest and made sure that nothing untoward happened. Some police acted very reluctantly that day which you can see on the police officer’s face in the video below, when he had to tell the protestors to go home. People were telling him that he didn’t have to do this; they were all there for him and his family, too, and if he did the right thing, he would go down in history as a hero. He visibly struggled for a couple minutes, but made the announcement in the end. He later said: “I was only following orders”. I think we have all heard that one before.

Protestors all sat down on the ground and would not leave, chanting “We’re staying here!” A part of them then proceeded to the main government building in a “human chain” and chanted “Angela, dein Volk ist da!” (“Angela, your people are here!”).

Everything was mostly peaceful, which was a big goal of the organizers—their motto was “Resist like Ghandi”. Although there were some Antifa activists there to start trouble among the protestors, and some young police officers sent to ”use violence” against some of the organizers and protestors, overall the day was calm.

The organizers themselves (“Querdenken”) were absolutely overwhelmed by the sheer number of people (at least a million in their words), as they had hoped for 500,000 tops.

They will keep organizing these protests all over Germany. The weekend of August 8-9 there were demonstrations in Stuttgart.

Politicians were panicked at the Berlin protest. It takes a lot for Germans to get off the couch and take to the streets — and no one expected those numbers.

In the aftermath, politicians are demanding that our basic human right to free and peaceful protest be severely restricted “in times of a nationwide pandemic” – We will see if that happens.

Here is the video from someone who filmed the march from a bridge for over an hour:

Which brings me to my next topic: There have been leaks from “government insiders” that the “second wave and lockdown” are already planned for mid September, and they will go on for much longer than the first. We can see politicians and media already preparing the public for this, blaming rising case numbers (due to mandatory testing) on the protests, on people returning from holidays, and people not wearing masks in public (when most people do).

The next protest in Berlin is scheduled for Saturday, August 29. I understand that people elsewhere in Europe are organizing protests as well. What about in the US? Will you join us?

Thank you so much for taking the time to read all of this.

Be safe and God bless,

A friend in Germany