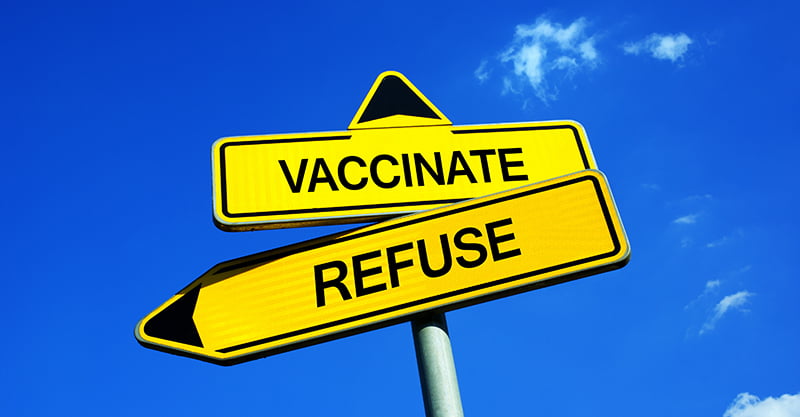 In the 1920s, Edward Bernays, the so-called “father of public relations,” wrote several influential books outlining the principles of successful propaganda. In his book by that title, Bernays argued that “the mind of the people…is made up for it by…those persons who understand the manipulation of public opinion” and know how to skillfully supply the public with “inherited prejudices” and “verbal formulas.”

Bernays’ comments come to mind in the current climate of hostility and intolerance being directed against individuals pejoratively dubbed by the vaccine lobby as “anti-vaxxers.” The dumbed-down propaganda being plastered across the mainstream media on an almost daily basis would have the public believe that anyone who questions any aspect of vaccination is ignorant, selfish or both. However, there is a glaring flaw with this logic. The incontrovertible fact—which the legislators, regulators, reporters and citizens who are participating in mass tarring and feathering are not honest enough to admit—is that many of the people classified as “anti-vaxxers” are actually “ex-vaxxers” whose dutiful adherence to current vaccine policies led to serious vaccine injury in themselves or a loved one.

Parental compliance with the Centers for Disease Control and Prevention’s (CDC’s) heavy-duty vaccine requirements for infants is often the catalyst for the injuries that start families down the path of becoming ex-vaxxers.

From compliance to injury

Vaccine coverage in the United States is high. In their first three years, over 99% of American children receive some vaccines. By the government’s indirect admission, however, vaccine-related adverse events are also common—with fewer than 1% of vaccine injuries ever getting reported.

Parental compliance with the Centers for Disease Control and Prevention’s (CDC’s) heavy-duty vaccine requirements for infants is often the catalyst for the injuries that start families down the path of becoming “ex-vaxxers.” In one tragic case, a parent who followed doctors’ orders lost her six-week-old infant girl 12 hours after the child received eight vaccines; medical experts’ conclusion that vaccination was the cause of death prompted a different valuation of risks and benefits with a subsequent child. There are many other such stories. Moreover, when individuals who suffer nonfatal vaccine injuries stick to the standard vaccination regimen, research shows that they often experience even more severe injuries the next time around.

In the U.S., vaccines have been liability-free since 1986—and evidence suggests that vaccine safety has deteriorated significantly as a result. The only current recourse for the vaccine-injured is to file a petition with the stingy and slow-moving National Vaccine Injury Compensation Program (NVICP). Although the NVICP has paid out over $4 billion in taxpayer-funded compensation, it denies far more petitions than it awards. The family of the six-week-old described in the preceding paragraph eventually received NVICP compensation, but not before the program expended considerable effort to leave the cause of death unexplained. And, literally adding insult to injury, the maximum payout for any vaccine-related death is only $250,000.

The chair of a Food and Drug Administration (FDA) committee has stated, ‘Congress is getting paid to not hold pharma accountable.’

When people or their loved ones are vaccine-injured, many begin to unravel the unscrupulous world of pharmaceutical influence on our media, government agency leaders and lawmakers. Connecting the dots is a horrifying and enlightening experience, exposing facts to which the general public generally remains oblivious. These revelations weigh heavily when someone makes the decision to permanently change into an “ex-vaxxer.”

Why would the people’s elected representatives (and the officials they appoint) propagate smears, promote censorship and ignore the testimonials of the many families that have experienced devastating vaccine injuries?

Why would officialdom ignore the escalating fiscal implications of vaccine injuries, which are imposing a staggering financial burden on households and taxpayers?

Why do the media increasingly advocate for the elimination of informed consent and vaccine choice?

One of the inescapable answers has to do with the overt and covert influence of pharmaceutical industry funding on those who shape vaccine policy and public opinion.

At the government level, senior Senators openly admit that “drug companies have too much influence in Washington,” with big pharma spending more than any other industry on lobbying and campaign contributions. For example, the pharmaceutical industry poured an estimated $100 million into the 2016 elections, rewarding politicians on both sides of the aisle with its largesse. The chair of a Food and Drug Administration (FDA) committee has stated, “Congress is getting paid to not hold pharma accountable” [emphasis added].

…studies show that medical journal advertising generates “the highest return on investment of all promotional strategies employed by pharmaceutical companies.”

Covering all bases, pharmaceutical companies also advertise vaccines and other drugs directly to U.S. consumers. The U.S. is one of only two countries in the world (along with New Zealand) that permits this type of direct-to-consumer pandering. Drug company spending on television and print advertising in the U.S. rose to $5.2 billion in 2016—a 60% increase over 2012—with untold additional amounts spent on digital and social media advertising. Astoundingly, pharmaceutical companies even get a tax break for these marketing expenditures, a corporate deduction that costs taxpayers billions annually.

The media benefit handsomely from the steady infusion of pharma advertising dollars. Four networks (CBS, ABC, NBC and Fox) received two-thirds of the TV ad monies spent on top-selling drugs in 2015, with the Prevnar 13 vaccine representing the eighth most-advertised pharmaceutical product that year. Under these bought-media circumstances, it is somewhat astonishing that a few media outlets were willing to concede that drug money “coursing through the veins of Congress” directly contributed to the opioid crisis. So far, however, no reporters have been willing to connect similar dots between drug money and unsafe vaccines.

What the WHO failed to mention, however, is the preponderant role of “commercial interests”—and especially pharmaceutical industry interests—in shaping its goals and strategies.

Pharmaceutical industry influence makes itself felt not just domestically but also globally, and this has led to a corresponding amping-up of rhetoric against “anti-vaxxers” around the world. In early 2019, the World Health Organization (WHO) hyperbolically declared “reluctance or refusal to vaccinate” to be one of ten major “global health threats.” What the WHO failed to mention, however, is the preponderant role of “commercial interests”—and especially pharmaceutical industry interests—in shaping its goals and strategies.

Back in 2009, sleight of hand by WHO scientists rebranded the swine flu from “a ‘perfectly ordinary flu’” into a “dangerous pandemic.” This maneuver successfully generated billions in profits for vaccine and anti-flu drug manufacturers; however, the vaccine in question (Pandemrix) caused cases of narcolepsy—many in young people—to surge all over Europe to nearly four times higher than prevaccine levels. In all likelihood, the parents of the narcolepsy-afflicted youth joined the ranks of “ex-vaxxers.” A researcher looking back on the Pandemrix fiasco recently stated:

“If vaccine regulators were serious about safety, the entire vaccine fleet would have been grounded following the Pandemrix narcolepsy disaster, to check for the same mechanism of failure in other vaccines. But nothing of that sort happened….”

If consumers want to learn about the potential risks of widely used FDA-approved drugs, they can—with a little legwork—find detailed information on hundreds of drugs on the FDA’s website. For azithromycin, for example, the FDA links to studies showing that the antibiotic increases risks of cancer relapse and cardiovascular problems. A link for fentanyl clearly warns of “the potential for life-threatening harm from accidental exposure” and “deadly” risks to both children and adults. Although it can be an uphill battle to get drugs taken off the market, the ongoing pressure of lawsuits has succeeded in removing some egregious offenders such as Vioxx—and Merck, Vioxx’s manufacturer, has been forced to pay out billions in settlements.

In contrast, consumers who go to the FDA website for risk information about vaccines (classified as “biologics” rather than “drugs”) will search almost in vain, finding sparse information for only four vaccines. One of the four is Gardasil—also manufactured by Merck, and one of the most notoriously dangerous vaccines ever rushed onto the market. While the FDA cautiously states that “concerns have been raised about reports of deaths occurring in individuals after receiving Gardasil,” the agency asserts that “there was not a common pattern to the deaths that would suggest they were caused by the vaccine.” The 2018 book, The HPV Vaccine on Trial, contradicts this benign narrative and describes how Gardasil has caused thousands of perfectly healthy young women and men to “suddenly lose energy, become wheelchair-bound, or even die” while Merck continues to enjoy “soaring revenues.”

For government and the media to dismiss these and other accounts of serious vaccine injuries as insignificant—while falsely labeling injured individuals and their advocates as irresponsible “anti-vaxxers”—is both shameful and insulting. After revealing how the mainstream narrative about Gardasil is riddled with “discrepancies and half-truths,” the authors of The HPV Vaccine on Trial issued a call for greater civility. Noting that marginalization and bullying of the vaccine-injured “destroys civil public discourse and discourages scientific inquiry,” they pointed out that “we urgently need both.”