California likes to brag about its “outsized influence” on the rest of the United States and its vaunted tendency to “experience the future earlier than other parts of the country.” However, having just passed the most draconian vaccine law in the nation—one that decimates the doctor-patient relationship and tells medically fragile children that they have no right to bodily integrity—it would appear that the state’s lawmakers and the medical trade groups that were only too happy to co-sponsor the legislation think it is trend-setting to model medical tyranny and the overthrow of the Nuremberg Code.

Within hours of the California Assembly’s 48-19 passage of SB 276, California Senators followed with their approval (28-11)—with all “ayes” in both chambers being Democrats—and the Democratic governor signed it along with last-minute companion bill SB 714. Illustrating the arrogant attitude prevailing among officialdom, the state health director (who recently resigned) casually dismissed the thousands who showed up to oppose the bill as “flat-earthers” and “booger-eaters.”

The editor of the independent news website California Globe called attention to the unseemly haste with which antidemocratic lawmakers “jammed through” legislation that essentially eliminates vaccine medical exemptions, quoting one dissenting Republican Senator as saying, “This Legislature is even scaring our medical community.” Is the Senator right? Just what do California doctors think about the unprecedented legislation that disses their sacrosanct relationship with patients and allows state bureaucrats to “illegally practice medicine over the top of the doctors”?

Some physicians were clearly concerned, turning out to testify against SB 276 or writing letters to ask the governor to veto the legislation. One physician wrote that the two bills “have created a climate of fear and anxiety,” leaving practicing physicians “afraid to speak up for fear of retribution, of being targeted by the state, for public censure and loss of professional respect.” Another doctor agreed that the legislation imposes “tremendous risk and liability—personally, professionally and financially”—on physicians who write valid medical exemptions, yet physicians bear “NO liability for giving contraindicated vaccinations, even if they cause foreseeable yet preventable harm.”

The climate of intimidation is one consideration. However, vaccination also offers doctors numerous financial incentives to toe the line. In fact, the majority of physicians appear to be willing participants in the U.S. vaccine program, no matter how many vaccines the CDC tells them to administer and no matter the evidence of vaccine damage that may be playing out before their eyes. Why not, when—as a private-practice physician affiliated with the CDC wrote a few years ago—nationally recommended vaccinations not only furnish “steady revenue” but can also improve a practice’s “financial viability.”

… the doctor discusses how physicians can make money on administration fees for pediatric vaccines by properly coding for the service.

In 2015, the physician then serving as liaison to the CDC’s Advisory Committee on Immunization Practices (ACIP) on behalf of the American Academy of Family Physicians (AAFP) wrote an article reminding fellow AAFP members that “minimizing costs and maximizing reimbursement can make immunizations profitable.” In addition to offering tips on how to be a “savvy vaccine shopper” and obtain manufacturer discounts for ordering multiple vaccines, the doctor discusses how physicians can make money on administration fees for pediatric vaccines by “properly coding for the service.”

Every two-year old is worth $400 if they meet the “Combination 10 Criteria” (View full size graph.) 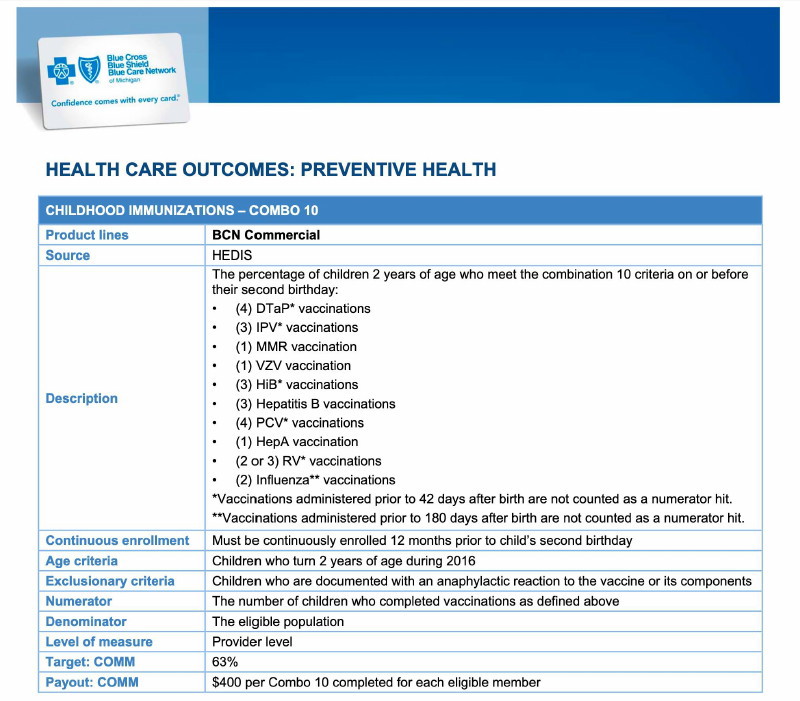 As he explains, “proper coding” involves not just billing for the vaccine itself (and including a diagnostic code that “reminds the insurance company that this is part of the routine immunization schedule”), but also billing for the fee that “is supposed to cover the time, energy, and supplies required to administer the vaccine as well as the overhead associated with managing the vaccines.”

The good doctor then goes on to describe the pediatric vaccine administration codes that he considers the “most important” from a “financial point of view”:

These codes, which include a counseling component…can be used only for patients 18 years old or younger. The reason these codes are so valuable is that they pay per vaccine component. For example, if you administer an MMR vaccine, you may bill for three components (measles, mumps, and rubella). If you administer a DTaP/IPV vaccine (Kinrix) you may bill for four components (diphtheria, tetanus, pertussis, and polio).

He notes that the codes were new as of 2011; prior to that year, combination vaccines actually resulted in lower rather than higher physician reimbursement.

Giving a “real life” example and again emphasizing that “the results are most dramatic for vaccines with multiple components,” the AAFP member describes billing for a two-month well-child visit at which the baby receives a five-component combination vaccine (DtaP/IPV/HepB) as well as three other vaccines—Haemophilus influenzae type b (Hib), pneumococcal conjugate (PSV13) and rotavirus.

Without any vaccine counseling, the practice would only be able to bill for $125 total, but with additional billing codes for “brief counseling,” the total reimbursement (as of 2015) would shoot up to $300—an extra $175 for a few minutes’ effort. Noting that the counseling codes do not cover counseling provided by nurses, he adds that he can also make the extra $175 by providing “a short vaccine-counseling visit” himself, when possible, in lieu of scheduling a nurse visit. Proudly, he notes that vaccine reimbursement often exceeds reimbursement for the rest of the visit.

… while doctors who support compulsory vaccination and the revocation of vaccine exemptions are on the wrong side of history where the Nuremberg Code and their Hippocratic oath are concerned for many, the absence of liability and the financial payoffs appear to be acceptable tradeoffs.

When it comes to the number of vaccines, the sky’s the limit

The Immunization Action Coalition (IAC) is a leading vaccine front group that receives significant funding from both vaccine manufacturers and the CDC and lobbies for the removal of vaccine exemptions. On its “Ask the Experts” webpage, the IAC tells physicians, “There is no upper limit for the number of vaccines that can be administered during one visit.” Even though researchers have never tested this assertion—with zero studies on the safety of the full vaccine schedule or the effects of so many simultaneous and cumulative vaccines—the AAFP rep’s description of the financial benefits accruing from “proper” coding provides one reason why so many physicians may be willing to pile the vaccines on without question.

At a time when Medical Boards are going after doctors who overprescribe opioids, one might expect doctors to have concerns about inflicting vaccine injuries through over-administration of vaccines. Not to worry, says the IAC, which reassures doctors (on the same “no upper limit” webpage) that the National Vaccine Injury Compensation Program confers medical professionals with liability protection for “all vaccines that are routinely administered to children.”

Bolstered by the Hippocratic oath, patients generally “trust that the physician will act in their interest, or at least will do no harm.” The first principle of the Nuremberg Code emphasizes voluntary consent and interventions free of “any element of force, fraud, deceit, duress, overreaching, or other ulterior form of constraint or coercion.” As Children’s Health Defense General Counsel Mary Holland writes, “SB 276 is a clear example of government overreach.” However, while doctors who support compulsory vaccination and the revocation of vaccine exemptions are on the wrong side of history where the Nuremberg Code and their Hippocratic oath are concerned—clearly the case for the physician-author of SB 276 who has never acknowledged vaccine-injured children—for many, the absence of liability and the financial payoffs appear to be acceptable tradeoffs.