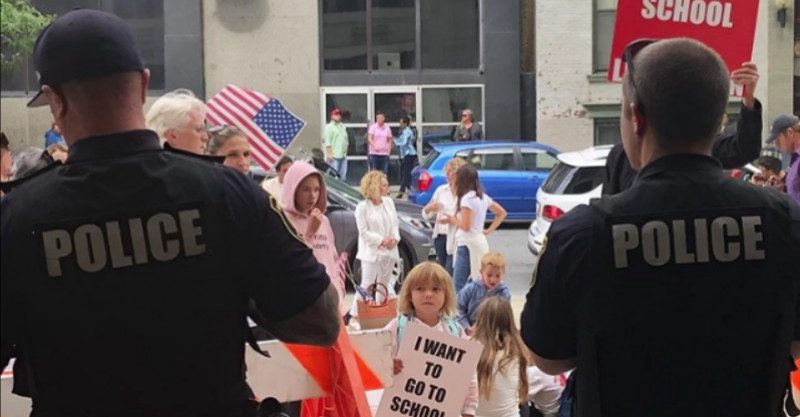 Eighteen-years ago today hijackers transformed two airliners into cruise missiles and crashed them into the World Trade Center. As we all know, thousands died. Anyone who is old enough to remember that day will never forget it. That morning I heard a report on the radio that a “light plane” had crashed into one of the towers. Even from a distance of 18 miles, the World Trade Center was normally clearly visible from our kitchen window, and as I looked toward lower Manhattan on that crystal blue day, I thought it strange that there was a weird cloud obscuring the towers. Then I realized it was billowing smoke.

Just days before 9/11, my wife and I received the devastating confirmation that our fears about our younger son Luke were correct, and that he had autism. We didn’t know it at the time but our experience with Luke was a common one. Following a fever after getting a group of shots, Luke lost his few words, began to appear deaf, lost any sense of pain, and began odd repetitive behaviors. That news turned our personal lives upside down, on 9/11 the entire world seemed upside down.

That horrible day generated thousands of questions. One key question was, “Why?” A week or so later President George W. Bush offered an answer in a joint session of Congress. He said, “They hate our freedoms — our freedom of religion, our freedom of speech, our freedom to vote and assemble and disagree with each other.”

This morning I was thinking about that day 18 years ago, and what is happening now. Several days ago, three brave parents in Sacramento took the step we all knew was coming, just like Rosa Parks more than half a century ago on a Montgomery, Alabama bus, they refused to comply with injustice and conducted civil disobedience leading to their arrest. No doubt this this will be the first of many to come.

The parents were in Sacramento attempting to stop the passage of a law that will muzzle physicians from straying from the medically orthodox line that, “Vaccines are safe!” The people who are always telling us to suspend our own judgment and listen to doctors are now telling us not to listen to the doctors, and taking away the doctors’ right to think, use their judgment, and put their patients’ interests first.

The same day in Albany, the state capital of New York, 500 parents were locked out of a normally public meeting of the Regents, our state board that sets school policy. In a few days 26,000 students will lose their right to an education because their families have religious beliefs the State will no longer tolerate, and our Regents had nothing to say about it. In Albany and Sacramento thousands of parents had the same chant, ‘Let us in!”

A few months ago, New Yorkers had our right to a religious exemption from vaccine mandates to attend school taken away. Our legislators took away a fundamental right we have always had in this state without a single public hearing or opportunity for the people to be heard. Our Assembly Health Committee re-voted at the behest of our Speaker when the first vote came back to kill the bill. Our Senate conducted their vote behind locked doors.

We now have internal religious refugees in the United Sates, thousands of families have fled, or are planning to flee, New York, California and Maine for states where they will be able to live in accord with their religious beliefs and exercise their God-given right as parents to care for their children.

Dozens of states are considering bills to limit our rights and force more vaccinations on unwilling people. Measles outbreaks are used around the world as a pretext to eliminate any right to refuse vaccines.

The political party that claims, “My body, my choice,”  as one of its most closely held values, leads the charge to take away any choice at all to decide what will happen with our bodies or our children’s bodies.

Presidential candidates try to one-up each other to show how ferocious they would be in doing the vaccine cartel’s bidding.

We have members of Congress calling for censorship of any criticism of the vaccine industry. The giant tech monopolies are more than happy to oblige.

The US House of Representatives is considering a resolution denying that vaccine injuries even happen, a mantra that we hear repeatedly in the media and from our elected officials.

This is a global fight between the parents of the world against the cartel that controls 90% of the world vaccine market: Pfizer, Merck, Glaxo and Sanofi. We tend to focus on the politicians, but they are just the hired help in this war.

In our efforts to keep our rights in New York we were called Nazis, lunatics, and every expletive you have ever heard. Far more troubling, a former Obama administration official in an editorial published in a newspaper owned by the richest man in the world called parents who question the good intentions of the vaccine cartel, “terrorists.”

“Terrorists.” Just like the hijackers on 9/11.  And we all know what happens to terrorists.

This battle for our fundamental human rights has reached a place most of us probably never imagined it could reach. But here we are. And we will be in it for the long haul. Let’s look to those brave parents in Sacramento, and the long history of Americans fighting for our rights, and know that we have truth and justice on our side, and if we persevere, we will prevail.

The Autism Action Network fights for you and your family every day, please keep us in the struggle. If you value the advocacy and information brought to by the Autism Action Network, please make it possible for us to continue our work by donating at our one fundraiser of the year we do in conjunction with the Autism Community Walk here: https://grouprev.com/autismactionnetwork2019