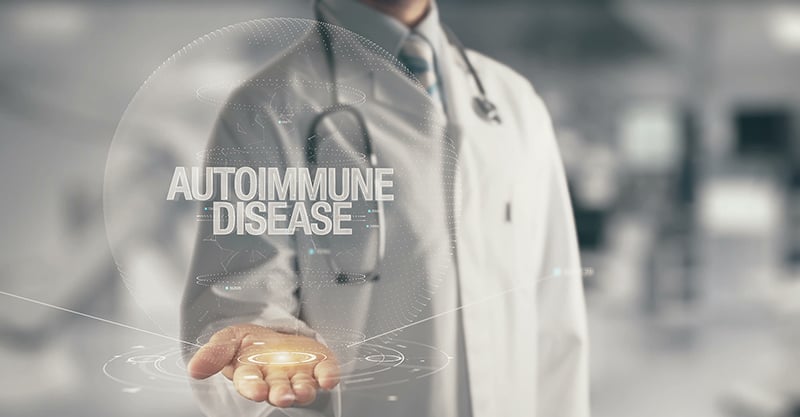 Autoimmune diseases are on the rise, with more and more people being stricken with these illnesses each year. The fact that the average person’s overall exposure to chemicals, including metals, has drastically increased over the past century cannot be overlooked when discussing the synonymous rise of autoimmune illnesses.

It is generally agreed that autoimmune conditions are related to a combination of genetic traits and environmental factors.  “Environmental factors” is a phrase that encompasses all aspects of the environment with which humans interact, including bacteria, viruses, chemicals, etc.

Even trace amounts of metals can potentially cause a reaction.

Metals have been recognized as one of the environmental factors capable of contributing to autoimmune disease, and metals have also been recognized as one of the triggers capable of producing inflammation.  Reactions are more likely to occur for individuals who are genetically predisposed to having lower excretion rates of metals, as well as other individualized factors.  Even trace amounts of metals can potentially cause a reaction.

While numerous health conditions have been related to the presence of metals in the body, scientific research has clearly shown that autoimmune diseases can be associated with metals used in dentistry and medicine, including metals in implants, devices, and vaccine adjuvants/preservatives (such as aluminum and mercury).  Several of the autoimmune conditions studied scientifically for their relation to metal exposure in this regard include the following:

Some metals are recognized as essential to human life and serve important roles within the human body. However, the beneficial effects of trace elements are based on safe and adequate intake levels, with too little resulting in deficiencies and too much resulting in toxicities. Many of the metals used in dentistry and medicine have no established function in the human body, such as aluminum, which is both a neurotoxin and an immune stimulator, and mercury, which is recognized as being toxic even in low doses.

Onset of Symptoms Can Be Delayed

An issue with calculating the number of patients who have adverse reactions to metals is that the onset of symptoms can be delayed and therefore might not be associated with the implant, device, or vaccine adjuvant.  Another issue is that there may not be any local reaction on the skin or in the mouth to help the patient and doctor identify the metal as the culprit in ill health. Even if hypersensitivity reactions are noticed, they can be misdiagnosed as infection.

In some genetically susceptible individuals, metals can trigger allergies, and recent studies and reports tend to agree that metal allergies are on the rise.  Clinical screening for metal allergy has been recommended, but the importance of patients reporting reactions to metals to their doctors has also been emphasized.

In addition to reporting any rashes from jewelry, watches, or other metal exposures, it is essential for each patient to recognize the gamut of symptoms that can be related to the presence of a metal implant, device, or adjuvant in their body, such as the development of an autoimmune disease.  It is also vital for patients to remember that sensitization to metal can develop years after an implant or device has been placed and that adverse effects can occur with or without the sign of a rash or eruption on the skin or in the mouth.

Improving or Recovering After Removal of Metals

Removal of metal implants and devices is an obvious course of action when adverse effects occur.  Indeed, the scientific literature is abundant with cases of individuals improving or recovering from autoimmune diseases usually within a year or two after removal of the offending metal.  Examples of health conditions related to metal implants, devices, and vaccine adjuvants that improved (or from which patients even recovered) upon removal of metals in the body include autoimmune thyroiditis, chronic fatigue syndrome, Crohn’s disease, fibromyalgia, multiple sclerosis, oral lichen planus, Sjögren’s syndrome, and systemic lupus erythematosus. 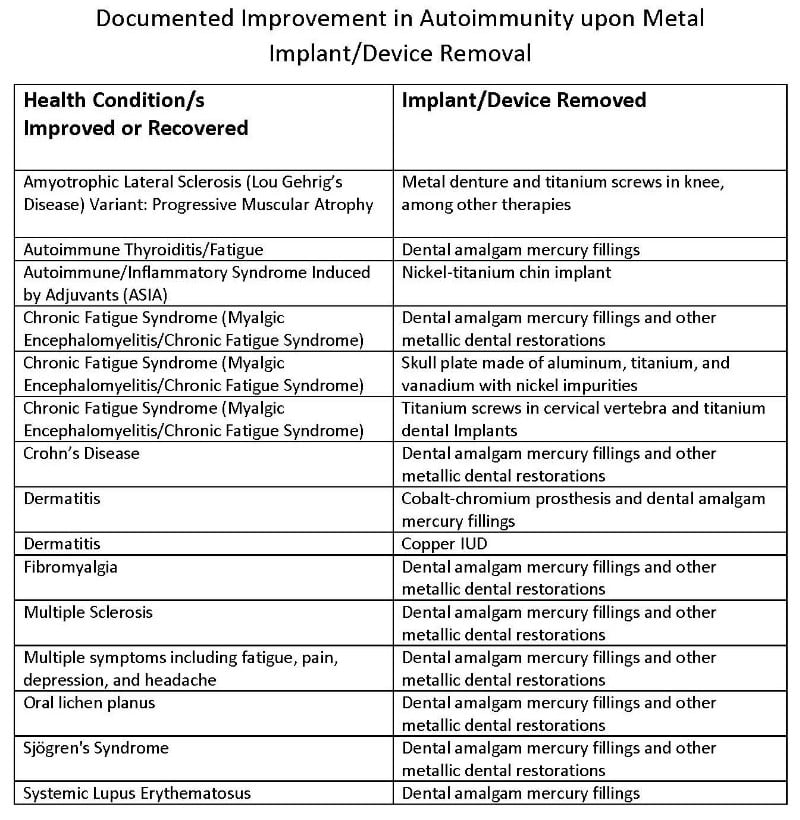 It is important to note that many factors can influence whether or not a patient improves after the removal of a metal implant or device.  While many patients improve or even recover, there are some who do not.  One obvious reason for this is if the patient is still being exposed to the metal or a different sensitizer through another implant, device, vaccine adjuvant, or other source.  Additional impediments in achieving improved health can include the presence of another illness and/or allergy, exposure to certain pesticides, solvents, molds, and foods, hormonal imbalances, stress, a sedentary lifestyle, and countless other circumstances.

Meanwhile, even though alternatives are available, millions of people are being exposed to metals used in dentistry and medicine.  Simultaneously, millions of people are suffering from autoimmune diseases, with substantial numbers of new patients being diagnosed each year. For all these reasons and more, it is imperative to recognize that metal implants, devices, and vaccine adjuvants can be a contributing factor to ill health.

A more detailed version of this article (Autoimmune Diseases and Metal Implants and Devices) can be found on the International Academy of Oral Medicine and Toxicology’s SMART website.

Author Bios:
These writers co-authored a chapter about the health risks of dental mercury that was published in a textbook about epigenetics from Springer in 2016.

Amanda Just, MS:  Ms. Just is the Program Director of the International Academy of Oral Medicine and Toxicology.  She is also a freelance writer and dental consumer who has shared her writings about the impact of dental mercury amalgam fillings with the United Nations Environment Programme, the U.S. Department of State, the U.S. Food and Drug Administration (FDA), and various NGOs.