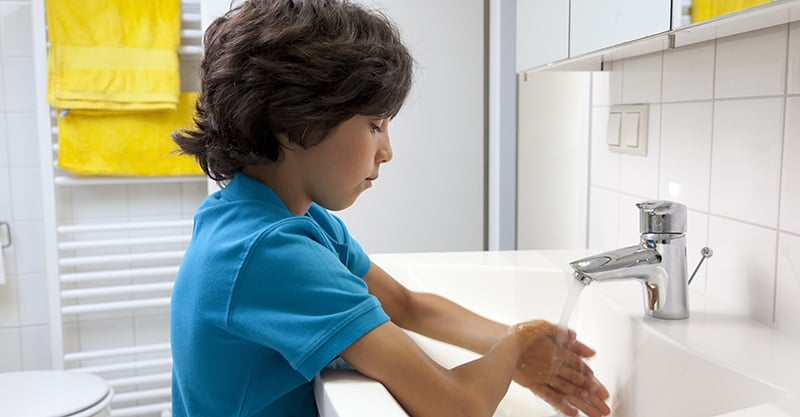 Obsessive-compulsive disorder (OCD), considered a neurobiological condition, is an often “long-lasting disorder in which a person has uncontrollable, reoccurring thoughts (obsessions), and behaviors (compulsions) that he or she feels the urge to repeat over and over.” Although the specific obsessions and compulsions vary widely from person to person, the common denominator is that they “create stress and interfere with daily life.”

U.S. researchers estimate that OCD affects 1%-2% of children and up to 3% of adolescents and adults. The current lifetime prevalence estimate of around 2.7% is 54 times higher than the estimated pre-1980s prevalence (for the U.S. population as a whole) of around 0.05% (1 in 2000). In a retrospective hospital-based study that looked at OCD prevalence over time, researchers who examined psychiatric discharge diagnoses from 1969 to 1990 reported that something changed in the 1980s, with a marked increase in the frequency of OCD diagnoses over the decade.

…”the immune system, both in the central nervous system (CNS) and in the periphery, is crucial in shaping and influencing normal brain functions, and any disruption of immune function could adversely impact the brain too.”

Reflecting the disorder’s growing prominence, the American Psychiatric Association’s 2013 diagnostic manual revisions eliminated OCD as a subcategory of “anxiety disorders” and gave the diagnosis its own category of “obsessive-compulsive and related disorders.” OCD experts now urge busy neurologists “to be aware of OCD…and to have a high index of suspicion for this disorder.”

OCD is just one of numerous neurodevelopmental disorders that have gone from relatively rare to common since the late 1980s—over the same time frame in which the childhood vaccine schedule exploded. There are at least three reasons to suspect a potential vaccine-OCD link:

As Duke University researchers have stated, “the immune system, both in the central nervous system (CNS) and in the periphery, is crucial in shaping and influencing normal brain functions, and any disruption of immune function could adversely impact the brain too.”

… OCD often presents alongside autism spectrum disorder (ASD), attention-deficit/hyperactivity disorder (ADHD) and other diagnoses that are not only increasingly common in American children but often persist into adulthood.

Studies show that OCD is more severe when it is early-onset; when diagnosed before puberty, children have “a longer duration of illness [and] higher rates of comorbid tics” as well as more frequent compulsions and greater psychosocial difficulties. In addition to comorbid tics, OCD often presents alongside autism spectrum disorder (ASD), attention-deficit/hyperactivity disorder (ADHD) and other diagnoses that are not only increasingly common in American children but often persist into adulthood. In a study of adults with OCD, three out of four (75%) had one or more other neuropsychiatric diagnoses. Researchers also believe that some types of OCD may be closely related to PANDAS (Pediatric Autoimmune Neuropsychiatric Disorders Associated with Streptococcal Infections).

Compared to girls, boys tend toward a greater neuroinflammatory response, reflecting sex differences in how the brain’s principal immune cells (the microglia) function. This may be one of the reasons why early-onset OCD is two to three times more common in boys. (In early adulthood, however, OCD symptoms appear more frequently in women.) In this respect, OCD is no different from a number of other neurodevelopmental and health conditions, including ASD, that also disproportionately affect boys.

The Yale authors considered the high comorbidity rates between OCD and anorexia significant and also highlighted that OCD and anorexia have a number of immune-mediated mechanisms in common.

In 2017, researchers from the Yale Child Study Center published a retrospective case-control study in Frontiers in Psychiatry that considered a possible association between prior vaccination and increased incidence of seven neuropsychiatric disorders, including OCD. Recall that at the start of the 1980s, children received three vaccines for seven illnesses (totaling two dozen doses by age 18), whereas fully vaccinated children now get almost six dozen doses for sixteen conditions.

The Yale researchers looked at a national sample of privately insured children and adolescents (ages 6-15) for the six-year period from January 2002 through December 2007. They found that for four diagnoses—OCD, anorexia nervosa, anxiety disorder and tic disorder—the affected children were more likely than matched controls to have received a flu shot in the preceding 12 months. In addition:

All three vaccines marketed in the U.S. for hepatitis A—GlaxoSmithKline’s Havrix and Twinrix and Merck’s Vaqta—list anorexia as adverse reactions reported during clinical trials. The Yale authors considered the “high comorbidity rates” between OCD and anorexia significant and also highlighted that OCD and anorexia have a number of “immune-mediated mechanisms” in common.

OCD is also frequently comorbid with a variety of autoimmune diseases. A recent Swedish study reported that individuals with OCD had a 43% increased risk of any autoimmune disease (compared to those without OCD), and “significantly elevated” risks for autoimmune conditions “across all organ systems”:

Aluminum-based vaccine adjuvants … are also a prominent suspect in the autoimmunity epidemic.

Given the extensive overlap between OCD and autoimmunity, the growing body of research that links vaccine adjuvants to autoimmunity is relevant for OCD. In fact, adjuvants—intended to intensify the immune response to a vaccine (immunogenicity)—present vaccine makers with a dilemma: “[I]ncreased vaccine reactogenicity [adverse reactions to vaccination] is the inevitable price for improved immunogenicity.”

Pointing to their influenza vaccination findings, the authors of the Yale study note that six European countries and China linked H1N1 influenza vaccination in 2009 to autoimmune narcolepsy, and some speculated that the H1N1 vaccine’s adjuvant—a squalene-based oil emulsion called AS03—was the culprit. Researchers caution:

A major recurring concern is the potential association between oil emulsion adjuvants and autoimmune disease induction as seen in animal and fish models. A single intradermal injection of a range of oil emulsions, including squalene emulsions, induces adjuvant arthritis in susceptible murine and rat models. […] There is a theoretical risk that any humans who share similar genetic susceptibility features to these models could similarly be prone to develop adjuvant arthritis, lupus, autoimmune hepatitis, uveitis or some other form of autoimmune disease after exposure to oil emulsion adjuvants alone or when combined with other potent innate immune activators [emphasis added].

Aluminum-based vaccine adjuvants—and especially the proprietary AAHS [amorphous aluminum hydroxyphosphate sulfate] adjuvant that Merck includes in its Gardasil 9, hepatitis A, hepatitis B and Haemophilus influenzae type b (Hib) vaccines—are also a prominent suspect in the autoimmunity epidemic. Researchers who compared AAHS to two other types of aluminum adjuvants found that AAHS was “substantially” different from the other two in revving up the immune system. As Italian researchers have stated, “the specific mechanism of action of each single adjuvant may have different effects on the course of different diseases.”

Hear no evil, see no evil

Pharmacotherapy with selective serotonin reuptake inhibitors (SSRIs) is a “first-line” treatment for OCD; because remission is uncommon, “long-term management is often necessary.” Pfizer and GlaxoSmithKline—two of the four companies that lead the U.S. vaccine market—make some of the top-selling SSRIs prescribed for individuals with OCD; the two pharma behemoths completed a joint venture in 2019 to integrate their consumer health care businesses. From their point of view, OCD represents an attractive market.

Meanwhile, earlier this year, the federal government and the National Vaccine Injury Compensation Program turned down citizen requests to add asthma, autism, tics and several neuropsychiatric disorders—including PANDAS—to the Program’s Vaccine Injury Table. The feds’ refusal was not terribly surprising: very few new injuries have made it onto the Table since the Program came into being in 1986, despite the large number of vaccines piled onto the childhood schedule after that year. The government’s resolute refusal to conduct needed studies and its denial of even the possibility of vaccine culpability for conditions such as OCD leaves individuals no choice but to ferret out answers on their own.