Water protectors descended on the area of Willow River in Minnesota, where Canadian energy giant Enbridge is working to install a "climate-wrecking" tar sands pipeline to replace one that was built in the 1960s. 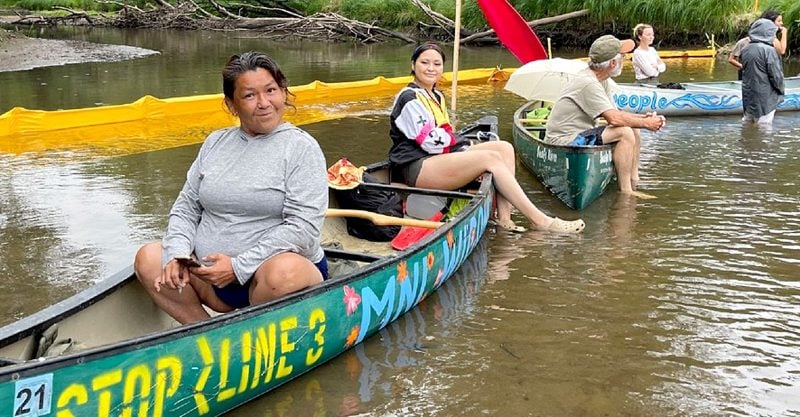 The Indigenous-led fight against Line 3 continued last week as water protectors descended on the area of Willow River where Canadian energy giant Enbridge is working to install a “climate-wrecking” tar sands pipeline to replace one that was built in the 1960s.

Water protectors attached themselves to drilling equipment and built blockades on access roads in an effort to halt construction in Minnesota last week, according to a statement from organizers.

Be the Public … Come to the Rivers

Speaking from the river, which is part of the Mississippi watershed, Aubid said: “Minnesota, you will be held accountable along with the federal and Canadian governments for the genocide of Mother Earth.”

How incredible are #stopline3 protesters? Every other day they’re undertaking a high-impact action, in the face of state repression and violence. https://t.co/KdQq6GtlXW

“We cannot allow them to take these rivers,” Taysha Martineau, a water protector of the Fond du Lac Tribe who has helped build Camp Migizi, said about last week’s direct action.

“Enbridge was given a cease-and-desist notice in order to protect the ceremonial lodge,” Martineau explained. “The state of Minnesota has refused to abide by that order and so action was taken. Abide by the order or we will continue to use people power to shut it down.”

Native Youth at the Willow River right now taking action, Giiwedin – Anishinaabe and Ugrunna from Barrow Alaska. This is why we have said all along HDD drilling method is dangerous for the rivers.#Palisade #mississippiriver #willowriver #waterislife #1855treaty
by Keri Pickett pic.twitter.com/uw4zZQtR9S

An unnamed water protector locked down in Minnesota declared that “Line 3 is a catastrophic threat to the land, the water, the people, wild rice and the climate.”

“This pipeline violates the treaty rights of the Anishinaabe and is not being built with Indigenous consent,” the water protector noted, before taking aim at the company behind it:

“Enbridge has a long history of spills, many of which occur in the first 10 years of a pipeline operating. They do not care about the land, the people or their workers. They only care about the money, so we are putting pressure on their pocketbooks by slowing the progress of Line 3 until we stop it altogether. Polluted water, land and rapid climate change are threats to us all, and Line 3 will cause unpredictable levels of damage if it becomes active.

“Actions like this one are a fight for all of our survival,” the activist added, “and should be seen as nothing less.”

Breaking the Enbridge Police have arrived .. the Willow River belongs to the public. #StopLine3 #WaterIsLife

In a series of tweets from the river last Tuesday, Honor the Earth raised concerns that “a spot in the river is warmer, and appears to have been polluted with drilling mud.”

The advocacy group shared a photo of a nearby container labeled “spill kit,” and said that there was “no one working to contain this drilling mud from washing downstream and polluting the river.”

While we were on the river today we noticed that a spot in the river is warmer, and appears to have been polluted with drilling mud, as if the drilling team punctured an aquifer.

These accidents go unreported and put our river at risk. We must #StopLine3. pic.twitter.com/FT8j1QKSRX

According to the Line 3 resistance movement, as of last Tuesday, more than 500 people have been arrested for protesting the pipeline. As Common Dreams reported last week, some of them now face felony charges.

Under pressure from Indigenous leaders and climate justice advocates, the Minneapolis City Council last week unanimously passed a resolution opposing the pipeline, calling on elected leaders who can stop it to do so immediately, and requesting that the city’s mayor and police chief refuse to participate in a law enforcement coalition formed in response to protests.

“This water we protect serves the people of your city,” LaDuke said last week of the development in Minneapolis. “Together we need to stop the last tar sands pipeline.”

Breaking Enbridge is trying to drill the Willow River at the Mississippi in Palisade. Water Protectors are taking action in the river. @POTUS needs to #StopLine3 Require the Army Corps to engage in Federal EIS. pic.twitter.com/vwiBSLsxez

Despite running on a broad promise to tackle the global climate emergency, to which the fossil fuel industry substantially contributed, President Joe Biden has so far refused to stop the project.

In fact, last month Biden’s Department of Justice filed a legal brief in support of the federal government’s approval of the project under former President Donald Trump.

Tara Houska, founder of the Giniw Collective, called the DOJ’s move “a horrific failure of the government’s duty to tribal nations, to climate science, to the sacred.”

Wen Stephenson, who protested against Enbridge in Massachusetts, wrote for The Nation that “the Giniw Collective and #StopLine3 campaign are demanding that the Biden administration suspend the project and order a review of the water-crossing permits issued under Trump.”

When operational, Enbridge’s pipeline would account for carbon emissions equivalent to 45 or 50 new coal-fired power plants, or 38 million cars, even as the global climate emergency accelerates. https://t.co/xwbpvMW2yy

“The state-level environmental impact statement, they point out, failed to consider the risks of (all but inevitable) oil spills; the impacts on “tribal cultural resources,” such as wild rice beds sacred to Anishinaabe people; as well as the project’s impact on climate change. If Biden orders a review and applies the same standard that compelled the Obama administration to reject the Keystone XL pipeline (to which Biden himself delivered the coup de grace upon taking office), then, as Houska says, “There’s no way it’s going to pass the test.”

According to Stephenson, who concluded with a call for solidarity with Line 3’s opponents, “What Enbridge is doing on Anishinaabe land in Minnesota, and what the fossil fuel industry and its political and financial backers are doing to drive global climate catastrophe, amounts to nothing less than a continuation of the genocide against the Indigenous peoples of the Americas and the Global South that began half a millennium ago.”