We Miss You Valerie Kennedy Chamberlain

Val never lost her youthful passion for learning and science. In retirement, she shared those enthusiasms with local high school students, her grandchildren and my children. 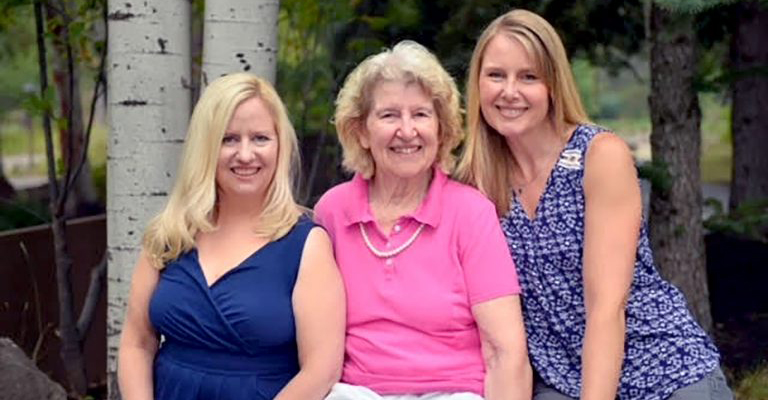 Val with her daughters Felicity Gorham and Melinda Caluori.

Children’s Health Defense’s (CHD) beloved Dr. Valerie Kennedy Chamberlain (no relationship to me) passed away very unexpectedly September 7, 2020. The picture above depicts her at her birthday this summer with her daughter Melinda. Val typed most of my handwritten drafts of Thimerosal: Let the Science Speak, and played a key role as a writer, editor and typist at World Mercury Project from its inception, and later at CHD.

Val’s life was a parade of extraordinary adventures and high achievements. Born in India in the twilight of the Raj — her father was a British civil servant — Val moved to England at age 7. She became one of the first women ever to graduate with a first-class honors Geology degree from Oxford University. She earned a master’s degree at Oxford studying geology in Uganda. She moved with her two daughters to Canada in 1977 and obtained her Ph.D. in geochemistry from University of Alberta. Working double duty as the exceptional mother of two energetic children, Val nevertheless won tenure as a professor of geology at University of Idaho. She taught there for 20 years, inspiring generations of students by creating a compendium of new courses, including Geology of the National Parks and Environmental Geology. Val retired to Washington State at age 70 to help her daughter raise her three grandchildren.

I met Val in 1988 when I delivered a keynote address at the University of Idaho, in Moscow. I spent the full day there, between engagements, and took time to hike, with Val, on the verdant ancient dunes of the Palouse, riveted by her encyclopedic discourse on the region’s geology and paleontology. We found an orphaned baby magpie, which I adopted. She was a brilliant paleontologist, and over the next years, we made several fossil hunting trips in upstate New York, in the Hudson Valley, where she taught us to uncover baskets of trilobite fossils as she enchanted my children with her geological chronicles of the Catskills.

Val never lost her youthful passion for learning and science. In retirement, she shared those enthusiasms with local high school students, her grandchildren and my children. She lived with my soon-to-be wife, Cheryl Hines, in Los Angeles during the Spring of 2013 and taught science and math to my daughter Kyra, inspiring her enduring love for those subjects. Back home, she volunteered at the Pacific Science Center in Seattle, and taught science nights at the local elementary school.

We shared a love for language (she disciplined herself to learn new words every day) and we always enjoyed working together researching and editing my books and articles for Children’s Health Defense.

She spent her retirement, (her 70’s!) on a series of adventurous expeditions to all corners of the seven continents. Her parents set the tone for Val’s appetite for excursions with their around-the-world honeymoon trip in 1936.

COVID put Val’s peregrinations on hold but she has had a happy and peaceful 2020 secluded at home working in her garden and enjoying her family.

Val is survived by her loving daughters Felicity Gorham of Chicago (husband Ken Gorham), Melinda Caluori of Seattle (husband Vince Caluori) and her three beloved grandchildren; Vanessa, Aly and Chris Caluori. Also by her lovely sister Bronwen Black (husband Donald Black) of Winchester, England. Val made time for her friends and her children, and always for CHD. We will remember Val for her indomitable and independent spirit, her intelligence and her love of learning, her intellectual integrity, her natal kindness and devotion to children’s health, empiricism, justice, robust science and the existential search for truth. At CHD, we miss her every day.