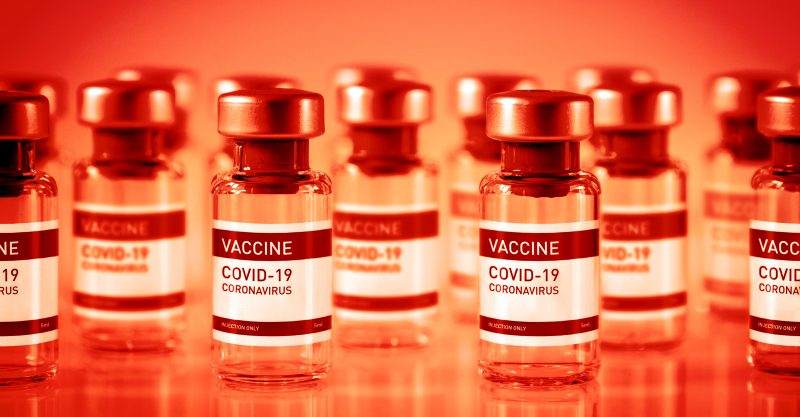 The Centers for Disease Control and Prevention (CDC) today released new data showing a total of 1,033,994 reports of adverse events following COVID vaccines were submitted between Dec. 14, 2020, and Jan. 1, 2022, to the Vaccine Adverse Event Reporting System (VAERS). VAERS is the primary government-funded system for reporting adverse vaccine reactions in the U.S. 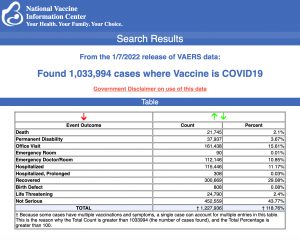 The most recent death involves a 15-year-old girl from Minnesota (VAERS I.D. 1974744), who died 177 days after receiving her second dose of Pfizer from a pulmonary embolus. An autopsy is pending.

A 26-year-old South Dakota man died Nov. 12, 2021, of myocarditis, just four days after receiving a booster dose of Pfizer’s COVID vaccine. Joseph Keating had no idea he was experiencing a rare and supposedly “mild” heart problem after the shot.

His only warning signs were fatigue, muscle soreness and an increased heart rate, family members said.

In an exclusive interview Jan. 11 with The Defender, Joseph’s father, mother and sister said the CDC had not investigated Joseph’s death, nor did the agency contact the pathologist who performed the autopsy or request the documents which confirmed Joseph’s death was caused by the Pfizer vaccine.

According to the autopsy report and certificate of death, Joseph died from severe heart damage from “myocarditis in the left ventricle due to the recent Pfizer COVID-19 booster vaccine.”

In an exclusive interview with The Defender, Joseph Keating’s mother said her son’s only warning signs were fatigue, muscle soreness and an increased heart rate, yet an autopsy confirmed he died of myocarditis directly caused by Pfizer’s COVID vaccine.https://t.co/Htk7GHXz6o

​​The U.S. Supreme Court on Thursday issued two opinions on the Biden administration’s COVID vaccine mandates on whether to stay or to grant temporary injunctions requested by plaintiffs in a number of lawsuits challenging the emergency mandates for millions of Americans.

First, the justices rejected the Biden administration’s mandate requiring employees of large businesses to be vaccinated against COVID or undergo weekly testing and wear a mask indoors while working.

​​The court’s conservative majority said the administration overstepped its authority by imposing the Occupational Safety and Health Administration’s (OSHA) vaccine-or-test rule on U.S. businesses with at least 100 employees.

In a second ruling, the justices said the mandates for workers in healthcare facilities that receive Medicare or Medicaid funding could stay in place while the lawsuits work their way through the lower courts.

The mandate is estimated to affect 10.3 million healthcare workers in the U.S., but allows for religious and medical exemptions.

During an interview on CNBC’s “Squawk Box” on Monday, Pfizer CEO Albert Bourla said two doses of Pfizer’s COVID vaccine — initially referred to as a full regimen — “offers very limited protection, if any” against the Omicron variant.

When a third, or booster dose, is administered the vaccine offers only “reasonable protection” against hospitalization and death from Omicron and “less protection against infection,” Bourla said.

EU regulators, WHO call for end of boosters

This comes a month after the regulators said it made sense to “administer COVID-19 vaccine boosters as early as three months after the initial two-shot regimen,” amid concerns over the Omicron variant.

The World Health Organization’s Technical Advisory Group on COVID-19 Vaccine Composition on Jan. 11 also warned, “a vaccination strategy based on repeated booster doses of the original vaccine composition is unlikely to be appropriate or sustainable.”

The group said giving additional doses of already existing vaccines as new strains of the virus emerge is not the best way to fight a pandemic, as currently available COVID vaccines do not prevent infection or transmission and the current composition of COVID vaccines need to be updated.

Australian authorities today revoked Novak Djokovic’s visa due to his unvaccinated status, in the latest twist in the ongoing battle over whether the nine-time Australian Open champion will be allowed to defend his title.

As The Defender reported, Australian Minister Alex Hawke used his ministerial discretion to cancel the No. 1 ranked Tennis player’s visa citing “health or good order grounds,” just three days before the Australian Open begins and four days after a federal judge ordered Djokovic be released from hotel detention when his visa was revoked the first time.

Djokovic’s lawyers are contesting the visa cancellation in court, in an attempt to allow him to play in the prestigious tennis tournament. If unsuccessful, Djokovic will face deportation.