The U.S. healthcare system is the most direct killer of all, designed to be indifferent to human suffering, to life and death. 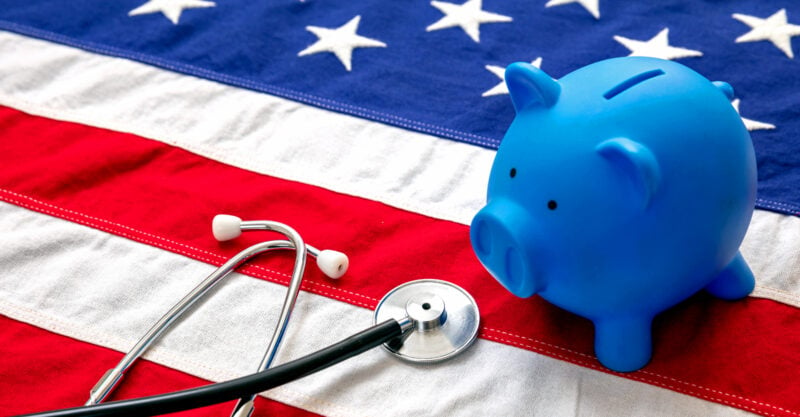 When I was growing up in the Rust Belt, there was a phrase people would use to describe an unusually vicious or cold-blooded kid in the neighborhood (and there were a few).

“He’d just as soon kill you as look at you,” they would say.

I thought of that phrase when a graph went around recently on left-leaning social media comparing life expectancy and healthcare costs in the U.S. with those in other industrialized countries. It went viral, even though the information it contained has been widely discussed for years.

That’s the power of a well-crafted image.

Why are our costs so much higher and our healthcare outcomes so much worse?

There are a number of reasons, but the most important one is: our health financing system is sociopathic. That’s not hyperbole. Ours is a system that would, quite literally, “just as soon kill you as look at you.”

I found a graph on U.S. life expectancy that was produced by Max Roser, who runs the website, Our World in Data.

And remember: when we talk about longevity, we’re not just talking about people losing the last few years of life… that’s tragic enough. But infant and child mortality bring down the curve, too, as does premature death at all ages.

During the decades covered by this graph, Black infant mortality rates were 2.5 times that of Whites. Race is a longtime predictor of health outcomes.

These statistics, which I prepared for Bernie Sanders before a Baltimore speech in 2016, are all too representative of Black America’s experience:

Here’s another statistic: Black children are seven to ten times more likely to die of asthma than white children. That’s one I take personally since I nearly died of asthma myself as a child (despite being white) and it’s a terrible way to go.

I could muster more facts and figures, but you get the idea. The racialized nature of the American healthcare system — which is instrumentalized through economic discrimination — both disables and kills.

White America is catching up, at least its poorer neighborhoods.

“Deaths of despair” — suicide, opioid addiction and alcoholism — were ravaging lower-income White American men even before the pandemic, contributing to the U.S.’s declining life expectancy (as seen in the graph above).

A paper in the Journal of the American Medical Association (JAMA) showed that living in an area with high economic inequality was, like race, a strong predictor of COVID-19 deaths.

Class is a killer.

Our healthcare system is the most direct killer of all. It is designed to be indifferent to human suffering, to life and death.

To this system, it doesn’t matter whether a person lives or dies as long as it gets paid. That’s why our healthcare costs are so high, even though our life expectancy is so low.

Health insurers operate under an even more perverse set of incentives. Their rates are based on the overall volume of services expected, which they then mark up. Their business practices are designed to shift as much cost as possible to the patient, while at the same time restricting the patient’s freedom to choose. They drive patients to providers who accept the insurance company’s low rates and agree to its restrictive rules about medical care.

That system is designed to be expensive. Let’s say you’re paying for a plan with a $5,000 deductible. As Sarah Kliff and Josh Katz documented for the New York Times, a colonoscopy at the University of Mississippi Medical Center will cost you $1,463 with a Cigna plan and $2,144 with an Aetna plan. If, on the other hand, you have no insurance at all, that colonoscopy will cost you “only” $782.

Kliff also reported on the case of a couple whose baby died while in the hospital. Although they had insurance through Cigna, the couple subsequently received a bill for $257,000 in what was described as “a dispute between a large hospital and a large insurer, with the patient stuck in the middle.” This system is indifferent to the trauma it inflicts on patients or their survivors.

It’s about the incentives

Outcomes are also a matter of indifference. People are billed, no matter what happens.

One study found that the average cost of treating accidents in the U.S. with fatal outcomes is $6,880 if the patient dies in the emergency room and $41,570 if they die in the hospital.

Some historians claim that ancient court physicians in Asia were paid for every month their patients remained healthy. That may or may not be a myth.

What is definitely not a myth is that, in many publicly-funded health systems worldwide, health professionals are paid by salary and not by volume, while hospitals are given a fixed (or “global”) budget to provide care. That creates less of an incentive for “churning” patients and more of an incentive to focus on patient care.

That’s the kind of system we should have.

Instead, we have a system where they charge $2,144 for a colonoscopy and $41,570 for an unsuccessful treatment.

That’s a system where they’d just as soon kill you as look at you. It doesn’t matter. They make money either way.

Richard (RJ) Eskow is a freelance writer. Much of his work can be found on eskow.substack.com. His weekly program, The Zero Hour, can be found on cable television, radio, Spotify and podcast media. He is a senior advisor with Social Security Works.