25 Pesticides Banned in Other Countries, Still Used in U.S.

About 3 million pounds of agricultural pesticides the World Health Organization considers "extremely" or "highly hazardous" were used in the U.S. in 2017.

By
Midwest Center for Investigative Reporting 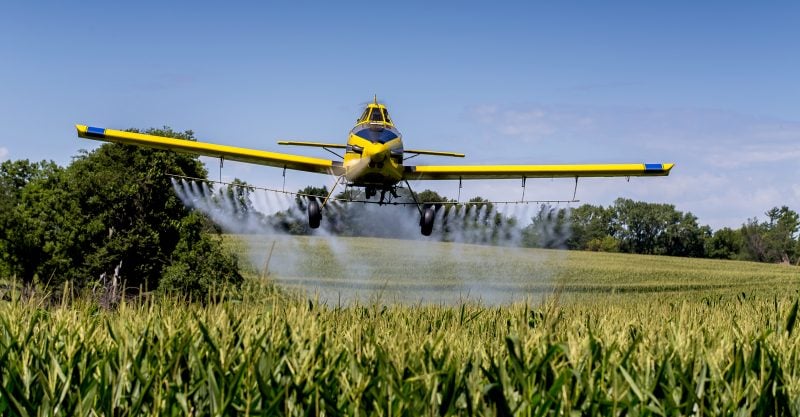 A total of about 400 different agricultural pesticides were used in the U.S. in 2017, the latest year data is available. More and more pesticides have been used because they “contribute to higher yields and improved product quality by controlling weeds, insects, nematodes, and plant pathogens,” according to the U.S. Department of Agriculture (USDA).

However, the USDA noted, pesticides pose consequences for people’s health and the environment.

Hazardous pesticides that are banned in many countries are still used in the U.S.

About 3 million pounds of agricultural pesticides that the World Health Organization considers “extremely” or “highly hazardous” were used in the U.S. in 2017, according to the U.S. Geological Survey (USGS). 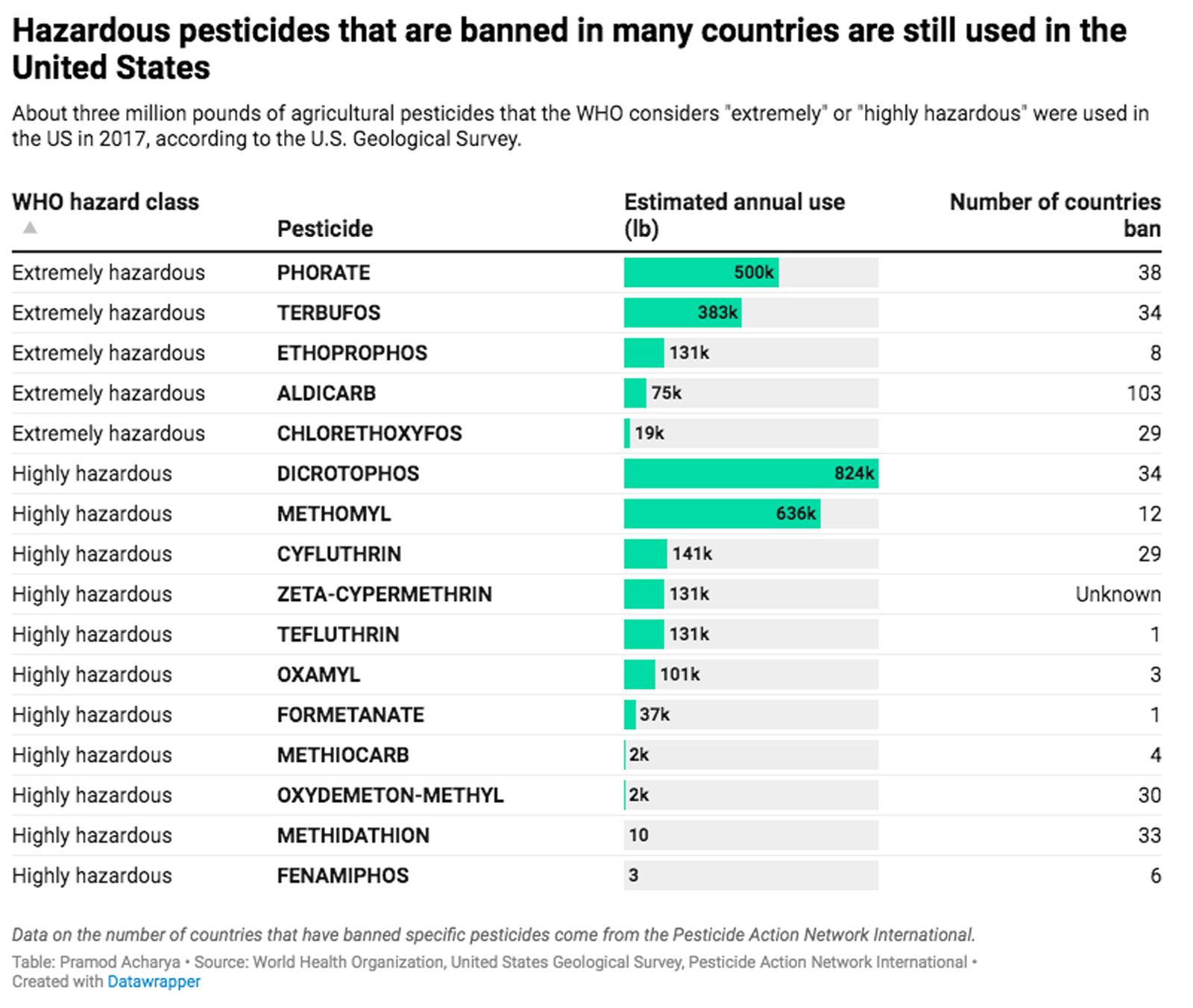 About 150 agricultural pesticides that the World Health Organization (WHO) considers “hazardous” at some level to human health were used in the U.S. in 2017, according to a review of USGS data.

Many “hazardous” pesticides that have been used in the U.S. for decades are banned in many other countries.

Twenty-five pesticides that are banned in more than 30 countries were still used in the U.S. in 2017, according to an analysis of data from the USGS and the Pesticide Action Network International, which keeps track of banned pesticides around the world.

The action network’s data show that about 70 of the 150 hazardous pesticides used in the U.S. are banned in at least one country.

Pesticides the WHO considers moderately hazardous are still in use

In 2017, nearly 90 different “moderately hazardous” pesticides to human health were used in U.S. agriculture, accounting for about 150 million pounds. Of those, 2,4-D, an herbicide, accounts for about 30% of total use. 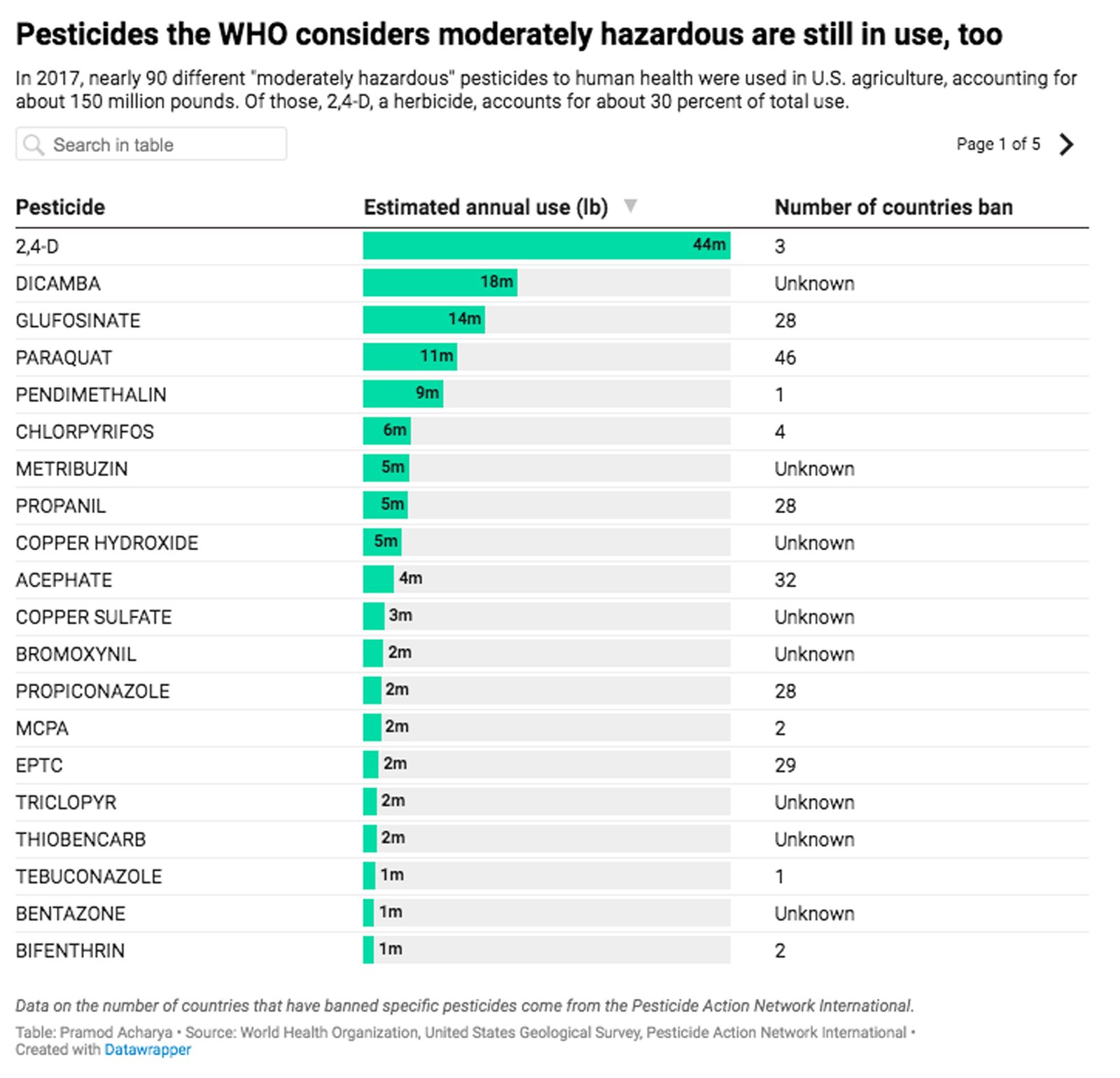 Pesticides the WHO considers slightly hazardous remain in use, as well

About 40 different “slightly hazardous” agricultural pesticides — that accounted for a total of 490 million pounds — were used in the U.S. in 2017. Among them, glyphosate, an herbicide and crop desiccant used to control weeds, alone represents nearly 60% of total use. 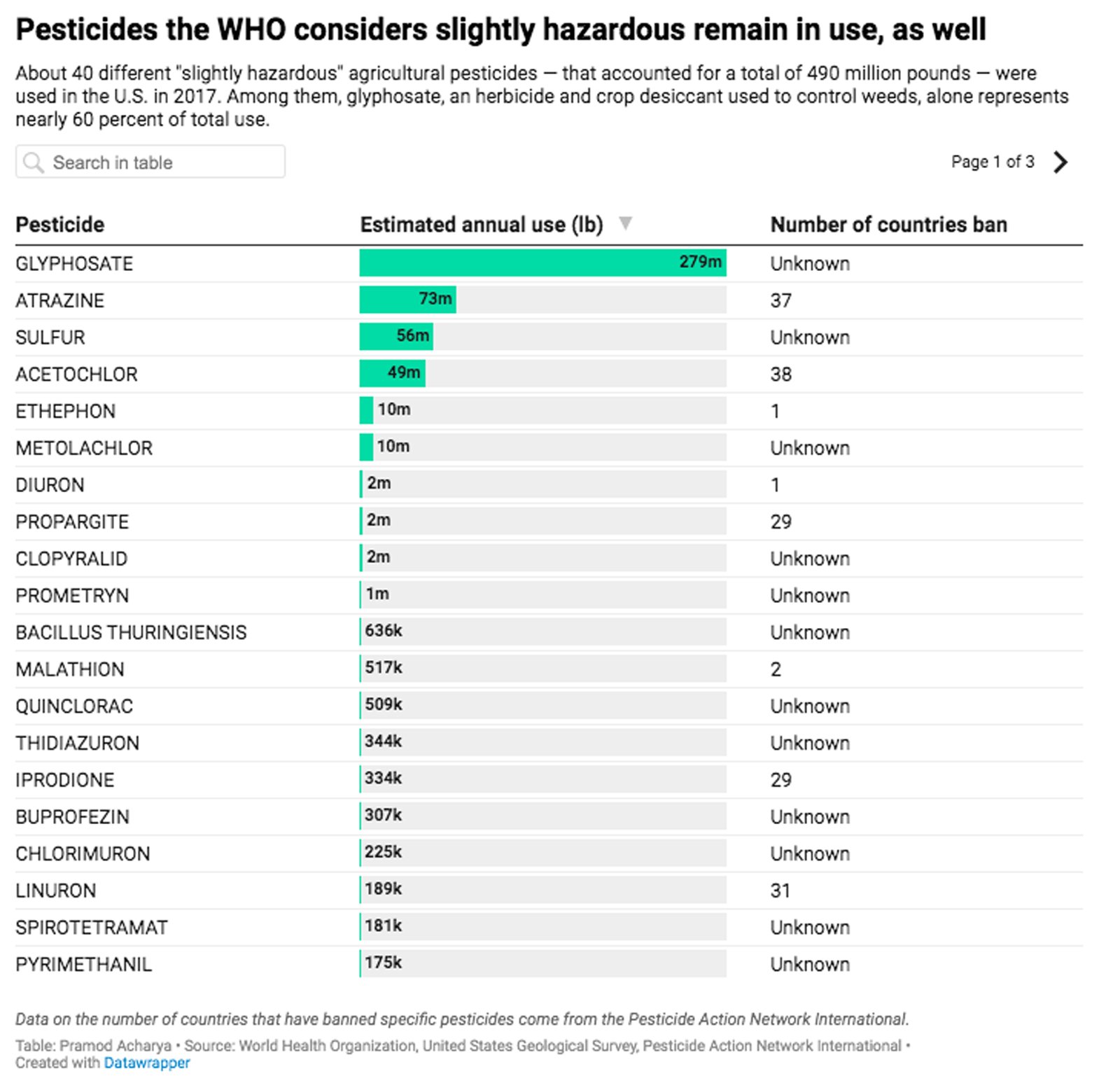 This story was republished from the Midwest Center for Investigative Reporting. 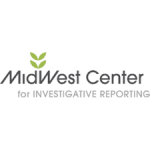 The Midwest Center for Investigative Reporting is an independent, nonprofit newsroom devoted to educating the public about crucial issues in the Midwest with a special focus on agribusiness and related topics such as government programs, environment and energy.