Tucker Carlson on COVID Vaccine Rollout: ‘Tons of Celebrity Endorsements, Not a Lot of Science’

Fox News commentator Tucker Carlson tells viewers that in a democracy, every citizen has a right to know the answers to questions about the safety and efficacy of the new COVID vaccines. 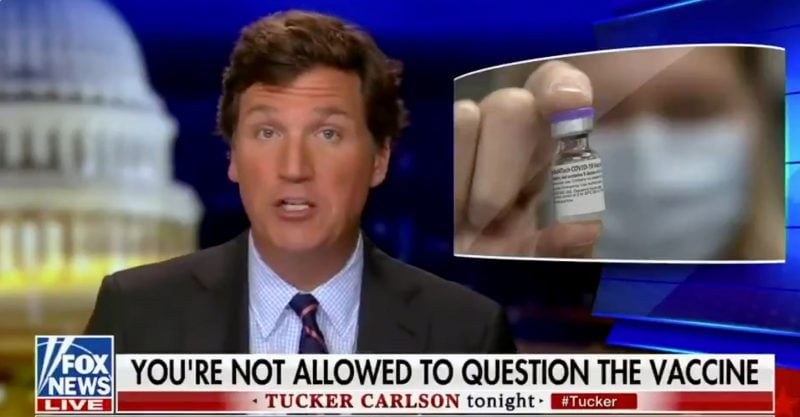 Tucker Carlson has a few questions about COVID vaccines. At the top of his list is: “Why are Americans being discouraged from asking simple, straightforward questions about [vaccines]?”

On Tuesday’s “Tucker Carlson Tonight” segment, the Fox News commentator suggested there’s “nothing QAnon about questions like that.”

“They are not conspiracy theories, they’re the most basic questions. In a democracy, every citizen has a right to know the answer, but instead we got fluff and propaganda.”

Carlson then went on to say:

“The media rollout for the vaccine came off like a Diet Pepsi commercial at the Super Bowl. Tons of celebrity endorsements, not a lot of science.”

Tucker Carlson says “they” are lying about the safety of the COVID vaccine and you know for certain that they’re lying bc they said you shouldn’t criticize it pic.twitter.com/YA1dgDQT9N

Carlson also took on the issue of vaccine information censorship, and questioned why Melinda Gates, wife of billionaire Bill Gates, and other Silicon Valley “gatekeepers” are so intent on silencing any and all questions about the COVID vaccines.

And, just this week, Facebook announced an updated policy the social media giant says is intended to combat “vaccine misinformation” on its platforms.

The UK’s Independent, which wrote about the Fox News segment, pointed out that Carlson is not anti-vaxx and in fact intends to get the vaccine himself.