A coalition of concerned parents, business leaders, teachers and other professionals throughout California have founded The Unity Project in opposition to California Gov. Gavin Newsom’s plan to impose a COVID-19 vaccine mandate on the state’s K-12 students once the U.S. Food and Drug Administration fully authorizes vaccines for this age group. 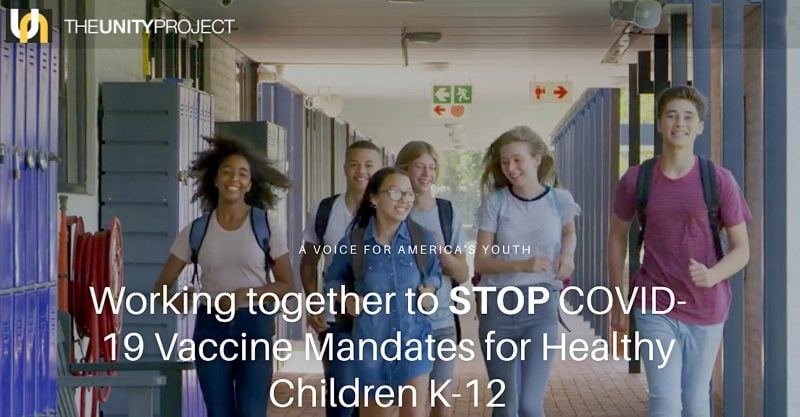 A coalition of concerned parents, business leaders, teachers and other professionals throughout California have founded The Unity Project in opposition to California Gov. Gavin Newsom’s plan to impose a COVID-19 vaccine mandate on the state’s K-12 students once the U.S. Food and Drug Administration fully authorizes vaccines for this age group.

Newsom’s plan has met with vocal criticism and protests from more than 100 grassroots groups comprised of large numbers of concerned parents. The Unity Project was formed to unite these independent groups statewide into a powerful force of concerned citizens that is well-resourced, well-coordinated with streamlined communication and propelled by strong execution across the state. The organization is humbly serving as a catalyst that significantly amplifies the good work of its strategic partners and magnifies and supports the best strategies being driven by the most experienced and effective groups in the space.

“The forced vaccination mandate comes in the midst of an ongoing scientific debate surrounding the risk/benefit analysis of this vaccine for healthy children 18 years and under,” said Laura Sextro, CEO of The Unity Project.

“It also defies common sense and fundamental parental rights. Opposition to this egregious overreach by Governor Newsom is widespread throughout California and The Unity Project is harnessing the broad outrage and enormous parental engagement this policy has evoked  statewide to stop it.”

The organization has launched its official website and has already formed more than 60 strategic partnerships with large and engaged grassroots organizations across the state; a partner-base that will undoubtedly grow exponentially and across state lines now that the organization has officially launched.

The core values of The Unity Project are:

The Unity Project, which has applied to become a 501(c)(3) non-profit, is governed by a seven-member board of directors, guided by a strategic advisory council composed of globally recognized and esteemed physicians, scientists, business leaders and community leaders, and managed by a professional executive team.