In addition to news and views, The Defender has added a community section where we’ll report on the work of Children’s Health Defense’s grassroots advocacy relating to health freedom and more. 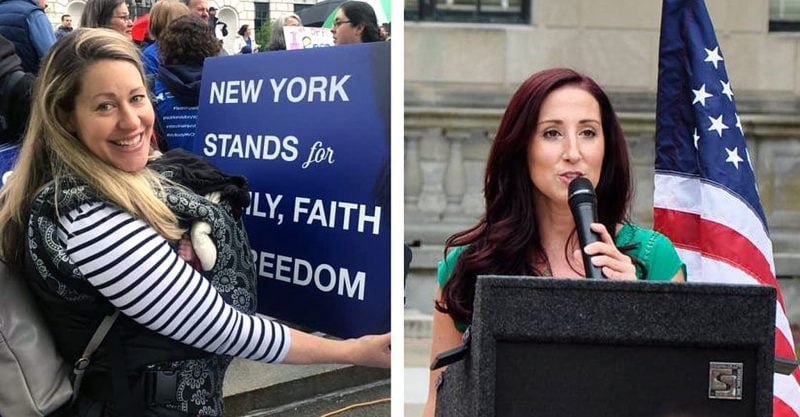 Locricchio’s advocacy journey began three years ago when she relocated from New York to New Jersey in search of the freedom to make decisions about her family’s health as New York moved toward eliminating religious exemptions for vaccines.

Not long after uprooting her family, Locricchio found herself rallying her community to oppose proposed legislation to remove the religious exemption in New Jersey.

“I was new to this work,” Locricchio said. “But I realized that imperfect action was better than no action at all. So I began using my voice to inspire, educate and empower others to get involved in this important conversation.”

“I learned quickly that the key to success isn’t necessarily knowing it all, it’s courage and consistent daily action,” Locricchio said.

McBride immersed herself in advocacy and state politics out of a deep-rooted passion for medical freedom, and also out of necessity. Shortly after witnessing the removal of vaccine exemption in California in 2015, McBride began networking with people in New York who wanted to preserve parental rights and fundamental liberties. She realized what happened in California could easily happen in New York — and it did.

Together with seasoned advocates who already had many years of experience in the medical freedom movement, McBride helped establish New York Alliance for Vaccine Rights, a grassroots advocacy organization focused on educating others and inspiring action to preserve and protect medical freedom.

“I am honored to know and fight side-by-side with some of the most determined, intelligent, passionate and kind-hearted advocates who share their common goal of creating a better world, especially for children and future generations” McBride said.

“Our army is growing, and we are excited to encourage more warriors to lend their voices to this very important cause. In order to be a voice for our children and for future generations, it’s imperative that we have people like Stephanie and Aimee building strong relationships with local elected officials, and helping fellow health freedom advocates do the same.”

Locricchio and McBride said it’s not necessary to be a seasoned advocate to make a difference. They offered these three easy steps to get started in your community:

Locricchio and McBride said they believe “the heart of an advocate” is one of service and purpose. “Advocacy is a calling, a labor of love. You don’t choose the issue, the issue chooses you,” Locricchio said.

McBride added: “This calling changes everything — who you are, who you surround yourself with and the direction your life takes.”