Be Afraid?: Ads for Tamiflu Prey on Flu Fears, But Cure May Be Worse Than the Disease 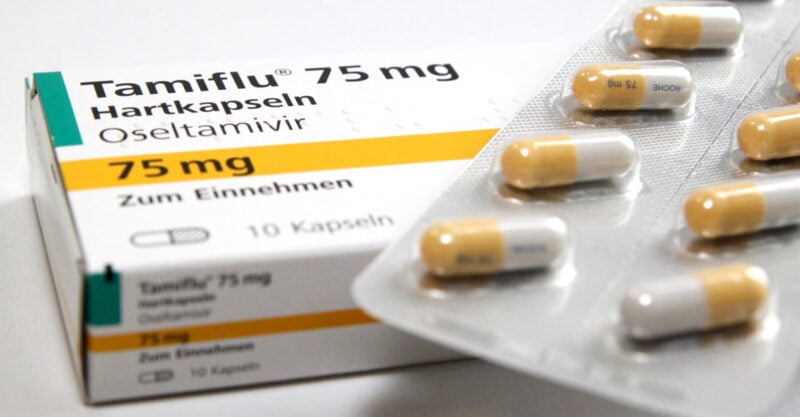 It’s been more than 20 years since Tamiflu, the first orally active neuraminidase inhibitor to prevent and treat influenza A and B, was rolled out by drugmaker Roche.

Not a flu vaccine, Tamiflu (oseltamivir) blocks the flu virus’s neuraminidase protein. The medication is available only by prescription and is often prescribed for people at high risk of flu complications.

As the world navigated bird flu (H5N1) in 2005, followed by swine flu only four years later, fear of pandemics rose rapidly. The World Health Organization (WHO) was even forced to rename swine flu as “H1N1,” as the public feared eating pork, and countries began banning imports from the United States, Mexico and elsewhere.

Swiss-based Roche was already well positioned in the influenza “space,” as drug marketers call it.

First, the company, whose biotech arm is Genentech, hired the marketing and communications firm Young & Rubicam (now called VMLY&R) for an educational campaign about flu as early as 2000.

Then, in 2006, Roche hired the advertising agency GSW Worldwide for a Tamiflu media blitz, despite industry voices cautioning against fearmongering about a “pandemic,” which could provoke panic and hoarding of resources, PharmaExec reported.

According to a 2013 article about Tamiflu in The Atlantic, a major danger of flu season is panicky patients rushing to emergency rooms even though they aren’t sick enough to need hospitalization.

“When emergency rooms are crowded, death rates among people who really need immediate care go up,” the article reads. “Not only are patients with minor flu-like symptoms exposing themselves to a load of other bugs when they rush to the ER, they’re potentially standing between some other patient and lifesaving treatment.”

In fact, Tamiflu marketing did create fear and panic by warning patients that they had “only 48 hours” from the start of flu symptoms to begin treatment with Tamiflu and stating: “Sometimes what we suffer from is bigger than we think. The flu is a big deal, so don’t treat it like a little cold. Treat it with Tamiflu.”

By 2009, Tamiflu advertising began to include ads on streetcars and trolleys and ads starring penguins from the Warner Bros. movie “Happy Feet.”

Not all were pleased with the flu drug advertising, however. The Daily Camera, a newspaper located in Boulder, Colo., wrote in 2009, during the peak of Tamiflu advertising, ‘“Like a lot of drug advertising, the campaign is drawing criticism claiming the company is driving up demand for an expensive drug that has been shown to be only modestly effective.”

The authors of The Atlantic story wrote that the Centers for Disease Control and Prevention (CDC) and public service announcements (which run free on news media) added to this fear-based marketing by running ads “urging people to get Tamiflu at the first sign of a sniffle or sneeze.”

Evan Morris, a Genentech lobbyist, reportedly hired consultants to build the frenzy over flu fears and sell Tamiflu in 2005.

“Dozens of U.S. senators wrote to President George W. Bush about their concerns, and the president authorized an emergency stockpile that bought $1 billion worth of Roche’s med,” FiercePharma reported.

A whistleblower lawsuit unsealed in 2020 charged that Roche “bilked U.S. federal and state governments out of $1.5 billion by misrepresenting clinical studies and falsely claiming that its well-known influenza medicine Tamiflu was effective at containing potential pandemics,” according to Halunen Law.

The U.K. government reportedly spent $710 million on stockpiling Tamiflu. Morris took his own life in July 2015 while under investigation for embezzlement.

Claims of Tamiflu’s effectiveness were challenged early in the scientific literature, according to a review study titled “Effectiveness of Oseltamivir in Adults: A Meta-Analysis of Published and Unpublished Clinical Trials,” published in the journal Family Practice in 2012.

“Two large unpublished studies in the elderly and in adults with chronic disease did not find a significant reduction in the symptom duration,” the researchers wrote.

“There is no evidence that oseltamivir reduces the likelihood of hospitalization, pneumonia, or the combined outcome of pneumonia, otitis media [inflammation of the inner ear], and sinusitis in the ITT [intention-to-treat] population.”

Soon afterward, in a scathing report, the Cochrane Collaboration, a nonprofit group that reviews medical treatments, reported that renal disorders, high blood sugar, psychiatric disorders and heart rhythm disturbances may be related to Tamiflu use.

The BMJ and Cochrane then issued a statement charging that Tamiflu and Relenza (an inhaled form of the same drug) had had their “effectiveness overplayed, and harms underplayed.”

The BMJ and Cochrane were unable to obtain the clinical trial data on which Roche’s Tamiflu claims were based for a five-year period, Nature reported. In 2017, the WHO downgraded the status of Tamiflu to “complementary.”

In addition to the Cochrane review, post-marketing studies documented additional side effects such as allergic and anaphylactic reactions, rashes including the deadly toxic epidermal necrolysis, and aggravation of diabetes.

By 2006, Tamiflu was also linked to neurological and psychiatric side effects and suicide.

“The European Medicines Agency has described two deaths, both attributed to suicide, in adolescents aged 14 and 17 who were taking oseltamivir,” the European journal Prescrire International reported.

“According to the U.S. Food and Drug Administration, neuropsychiatric disorders were reported in 32 children (mainly in Japan), and include delirium, behavioral disorders, hallucinations, convulsions, and confusion.”

The IndyStar reported that the family of an Indiana teen who took his own life in 2018 blamed Tamiflu and also in 2018, a 6-year-old Texan girl tried to jump out a window while on the drug.

The Prescrire authors also cited “disturbing neurological toxicity” in young rats exposed to Tamiflu and noted that American and European agencies “warn against the use of oseltamivir in infants less than one year old.”

Since Tamiflu is only modestly effective in preventing or treating flu, “the possibility of serious adverse effects should be weighed against the limited benefit of oseltamivir,” the authors concluded.

Researchers writing in the journal Acta Neurologica Scandinavica in 2017 added more doubts about the drug’s safety.

“It is known that oseltamivir inhibits nicotinic acetylcholine receptors, which are closely related to hypothermia,” they wrote. Other receptors may be “related to respiratory suppression followed by sudden death and psychotic reactions,” which have been seen with Tamiflu.

Tamiflu also was seen to cause the very flu symptoms it was supposed to prevent or mitigate.

There’s also a worry in some circles that the vaccines themselves could influence virus mutations. The same is true of Tamiflu.

As the 2022–2023 flu season begins, Tamiflu is still in the news. A September study in the Journal of the American Medical Association, widely circulated by medical news sites, found early administration of Tamiflu to children hospitalized with influenza resulted in better outcomes.

Healthline, a major health site, notes, however, that the drug can cost $100 without insurance, may be ineffective for some flu strains and may cause “hallucinations, confusion, convulsions, [and] other neurologic or psychiatric issues.”

Yes, Tamiflu is still in the news and in use, but its safety and effectiveness questions are far from resolved.

Martha Rosenberg is a nationally recognized reporter and author whose work has been cited by the Mayo Clinic Proceedings, Public Library of Science Biology and National Geographic.