According to an analysis released today to mark Tax Day in the U.S., the country's 735 billionaires have seen their collective wealth soar by 62% over the past two years while worker earnings have grown just 10%. 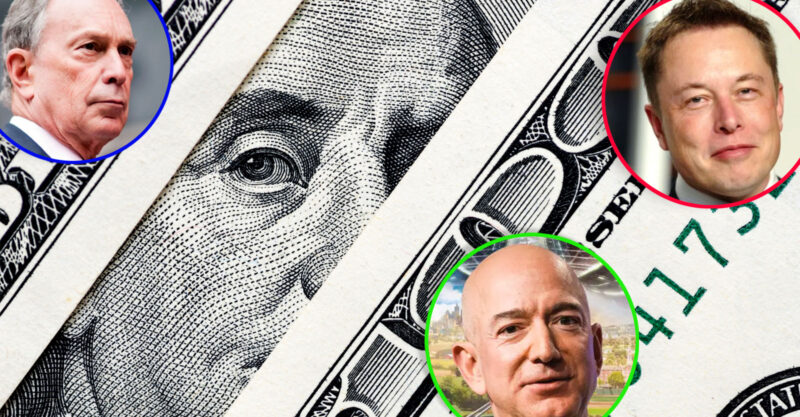 An analysis released today to mark Tax Day in the U.S. shows that the country’s 735 billionaires have seen their collective wealth soar by 62% over the past two years while worker earnings have grown just 10%, modest gains eaten away by the rising costs of food, housing and other necessities.

According to new calculations by Oxfam America, U.S. billionaires now own a combined $4.7 trillion in wealth, much of which goes completely untaxed. As ProPublica recently found in an examination of data from the Internal Revenue Service — an agency that disproportionately targets the poor — the 25 richest people in the U.S. paid a true tax rate of just 3.4% from 2014 to 2018.

“The billionaire wealth explosion in this country comes at a time of historic inflation hitting working families, compounded by the expiration of critical social safety nets put in place at the start of the pandemic to protect America’s most vulnerable,” said Gina Cummings, vice president of advocacy alliances and policy at Oxfam America.

“The impact on real people is devastating, leading countless families to slip into poverty,” Cummings added. “The ongoing failure of our nation’s leaders to implement a more equitable tax system is a stain on democracy.”

Oxfam’s new analysis estimates that a series of tax proposals that have been introduced in Congress but have yet to pass would bring in $252 billion in additional federal revenue each year.

The version of President Joe Biden’s Build Back Better agenda that the House passed in November would cost just $175 billion per year over the next decade.

That legislation, which includes clean energy investments and an extension of the poverty-slashing child tax credit boost, is effectively dead in the Senate due to the opposition of every Republican as well as Sens. Kyrsten Sinema (D-Ariz.) and Joe Manchin (D-W.Va.). Both Manchin and Sinema have pushed back on Democrats’ efforts to hike taxes on the wealthiest Americans.

That new revenue, according to Oxfam, “would more than cover paid sick leave ($10 billion), family medical leave ($20 billion) as well as affordable child care to allow more mothers and caregivers to return to work by absorbing the crushing cost of care for young families ($24 billion).”

“While the pandemic grinds on, it is shocking to realize, and accept, that three-quarters of low-wage workers do not have access to paid sick leave,” said Cummings. “It needs to be said that a vastly disproportionate share of these workers are women and people of color, making this a civil rights issue. This is not just morally unacceptable, it’s dangerous for everyone. We can fix this with a small tax on those who have billions to spare.”

The aid group noted that another $63 billion could be raised by implementing a global minimum tax on multinational corporations, a proposal that the Biden administration and the leaders of more than 130 other countries have backed.

But huge obstacles remain in the way of final approval of the tax, given that the legislatures of individual nations have to approve it.

Oxfam found that “the $63 billion a year in corporate tax revenue could allow the U.S. to invest in climate finance, including tax credits for clean energy ($11.4 billion) and cutting carbon emissions with tax credits for consumers and companies ($32 billion); and fund critical public health needs, including funding global Covid health needs ($5 billion), covering the uninsured for Covid vaccines and testing ($1.5 billion), expanding Medicare for hearing ($8.9 billion), and closing the Medicaid gap ($6 billion).”

“We reject the narrative that this country cannot afford to invest in a better world: protect the planet, feed hungry children, ensure child care costs do not wipe out a family’s earnings, guarantee that hourly workers receive paid leave for illness or the birth of a child,” Cummings said today.

“The American people have been told a lie,” Cummings continued. “They are paying their fair share to keep this country running. It’s time for our nation’s billionaires and giant corporations to contribute their fair share of taxes to support the very people who have provided the labor that has allowed them to enjoy record profits and excess wealth.”

Later on Monday, Oxfam America is planning to join activists from Americans for Tax Fairness, MoveOn, and Daily Kos in delivering petition signatures from more than 500,000 U.S. taxpayers expressing opposition to the glaring inequities of the country’s tax system.

“As everyday Americans continue to struggle during the ongoing pandemic, taxes on the rich remain shamefully low and billionaires have seen their wealth skyrocket,” Carolyn Fiddler, communications director for Daily Kos, said in a statement. “We call on Congress and President Biden to hold billionaires and the wealthy accountable.”