In an exclusive interview with The Defender, 16-year-old Sarah Green and her mother described Sarah’s neurological symptoms following vaccination with Pfizer, and how doctors wouldn’t acknowledge the vaccine might be to blame. 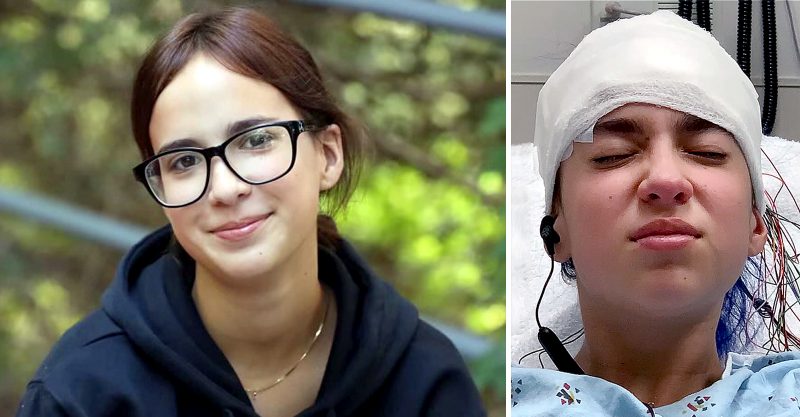 Sarah Green was a healthy 16-year-old — until she developed neurological problems after getting Pfizer’s COVID vaccine. But doctors said her new tremors, tics and debilitating migraines couldn’t possibly be caused by the vaccine.

In an exclusive interview with The Defender, Sarah and her mother, Marie Green, said they feel helpless because nobody will acknowledge Sarah’s vaccine injury and “nobody can help them.”

Sarah received her second dose of Pfizer on May 4, and immediately experienced a headache at the base of her neck that radiated to her temples. She said it felt like she got “hit by a bus.” She took a nap in hopes she could sleep it off.

The headaches never went away and slowly, over the course of three weeks, Sarah developed small facial twitches.

“The night of May 23, I went to my dad because my neck had started twitching every 15 seconds,” Sarah said.

Green said Sarah would start a word and it was as if her brain would reset. “It wasn’t like she was trying to get a word out — it would just start over.”

After Sarah’s symptoms worsened, her parents took her to Johnston Health in Smithfield, North Carolina. Upon arrival the physicians noticed Sarah had constant tremors. Green said the doctor looked down and noticed Sarah’s right foot also had a tremor, but they didn’t have a pediatric neurologist, so she was transferred to WakeMed in Raleigh once she stabilized.

Sarah’s EEG, MRI with and without contrast and CT scans were normal. After two days the doctor came in and said Sarah had a nervous twitch and needed to see a mental health professional.

During the MRI with contrast, Sarah’s mother said she stopped breathing and had to be pulled out of the machine and intubated. Two hours later the doctor came in and said they were going to send Sarah home.

“They weren’t even going to refer her to a neurologist,” Green said. “They said it was just a nervous tic and she needed to see a therapist.”

Green said the vaccine was not the first thing she thought of when her daughter’s symptoms initially started, but the hospital had her fill out a form of things that might have changed and “when it came down to it, the only thing that changed was the vaccine.”

When Green asked the doctor if the vaccine could have caused her daughter’s condition, he got very defensive and said, “We can’t blame everything on the vaccine.”

Green said the physician’s response was frustrating. “How can you say you don’t know what it is but say the vaccine isn’t the cause?” she asked.

Green said, “As soon as we said it was the vaccine, it was like they couldn’t get us out of there fast enough.”

When Sarah finally got into a neurologist on June 6, Green asked if Sarah’s condition was vaccine-related.

The doctor said Sarah had functional movement disorder and it was not related to the vaccine — although she said she has seen more cases since COVID vaccines were approved because people “stress themselves out over the vaccine and it’s psychosomatic.”

According to the National Organization for Rare Disorders, functional movement disorder is a type of functional neurological disorder that occurs when there is a problem with the functioning of the nervous system and how the brain and body send and/or receive signals — rather than a structural disease process, such as multiple sclerosis or stroke.

The condition can encompass a wide variety of neurological symptoms, such as tremors, dystonia, jerky movements (myoclonus) and problems walking (gait disorder).

Green didn’t agree with the doctor’s assessment that Sarah’s reaction was “psychosomatic.”

“Sarah is 16. She was nervous about getting a needle in her arm, but once she got the vaccine she slapped a Band-Aid on it and went off to Starbucks,” Green said.

“When I tried to explain that to her neurologist, she said that I needed to stop focusing on what caused it and focus on getting my daughter well,” Green explained. “But I felt like if we didn’t know why, we wouldn’t be able to treat her the right way.”

Green said Sarah got the vaccine on her own because in North Carolina, she could get the vaccine without parental consent.

“She works in fast food and on the frontline and they were told the vaccine would be mandated,” Green said. “Krispy Kreme was giving out a dozen donuts, so the kids went and got their shots.”

Green said neither she nor her husband got a COVID vaccine. When Sarah said she wanted to get it, Green explained her and her husband’s reservations and why they weren’t getting the vaccine.

“We have been asked many times why she got it and we didn’t. She did come to us and tell us she wanted to, but we did not know she had made up her mind. We had a discussion about it, but her job and the free incentives that I feel were targeted towards young people — Krispy Kreme offered them a dozen free donuts — really swayed her decision.”

Sarah was told the risks of getting a vaccine included having a sore arm for a few days, but now it has been months and she’s not fine.

Sarah had to drop two college classes this semester because of her symptoms. “She had just started driving but she cannot drive anymore because she can’t look up or turn her head to the right without it causing spastic tremors. She also can’t write,” Green said. “She has constant tremors like someone who has Parkinson’s disease.”

Sarah’s symptoms have progressively worsened over time, but the only treatment option recommended to her was a medication similar to Benadryl.

“It’s so frustrating. We tried to get her into a hospital in Florida but there is a six-month waiting list. We called Cleveland but they have a three-month waiting list. We have called the Shriners hospital and they won’t even see her. We had an appointment at Duke but it was going to be on a video conference. We just keep getting doors slammed in our faces and the minute you mention a vaccine they don’t want to deal with you anymore.”

Green said she and Sarah are not anti-vaxxers. “Sarah has had all of her vaccines, but there are too many people having problems for them not to know there’s no problem with these mRNAs. If they would just acknowledge the potential side effects … but they’re acting like it’s not even happening, and it’s not fair to her and for her entire life to be put on hold,” she added.

“When I called Pfizer they just had me answer some questions and said if there were new symptoms to call back and they could update their report,” Green said. “When I called back a second time they said they lost the report. When I asked if anyone else had called with the same symptoms they said ‘no.’”

As The Defender reported Sept. 8, a 30-year-old woman suffered severe neurological complications after receiving Pfizer’s COVID vaccine, and she also reported her injury to Pfizer.

Dominique is still searching for answers from doctors after developing a long list of debilitating conditions, including severe neurological complications, pain and at times, an inability to walk, following her first dose of Pfizer’s COVID vaccine.https://t.co/pl06mjTjdP

Among them was Maddie de Garay from Ohio, who volunteered for the Pfizer vaccine trial when she was 12. She is now in a wheelchair after experiencing severe adverse reactions to the vaccine.

Green, who said Sarah was healthy and living her best life prior to being vaccinated, is very concerned about children 12 and under getting the vaccine. “Just acknowledge the problem and fix it, but at least inform people what to look for,” she said.

“I just want my life back,” Sarah said. “Everything has just been put on hold. I had to drop my college classes because I can’t write and I have doctor appointments. I was going out with my friends, but now it’s exhausting. My migraines are so bad I have to sit in a dark room with no light or device and sit for hours.”

Sarah’s mother said she feels guilty for not looking into the vaccine more before her daughter went and got it. Now she feels helpless because “you feel like there’s nothing you can do and nobody who can help you.”