On his latest “Under the Skin” podcast, Russell Brand defended comedian Trevor Noah, who came under fire last week for suggesting Moderna’s CEO might have an ulterior motive for proposing the need for a new vaccine to combat the Omicron variant. 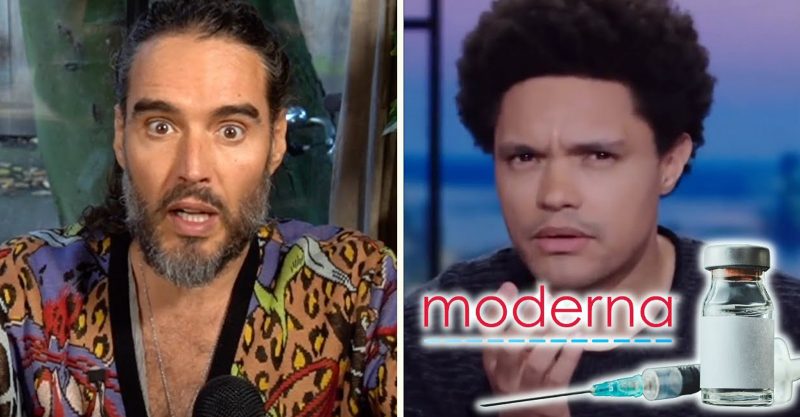 On the latest episode of Russell Brand’s “Under the Skin” podcast, Brand called out the mainstream media for attacking comedian and late-night host Trevor Noah after Noah cracked a few jokes at the expense of Moderna CEO, Stéphane Bancel.

Brand said it’s becoming more and more difficult to criticize or question the motives of Big Pharma, no matter how mild or sensible the critique or line of questioning.

Noah’s jokes, shared via video on Twitter, were based on recent comments Bancel made about needing a new vaccine to fight the new Omicron variant.

“On the one hand, almost all of the Omicron cases have been mild so far, but on the other hand the guy who stands to gain millions of dollars from new vaccines says we need new vaccines, huh,” Noah joked.

“I’m not saying the CEO of Moderna is lying, I’m just saying I don’t think he’s the most objective source on this topic,” the comedian said.

The post ridiculed Noah for “appearing suspicious,” and for “questioning” the CEO’s intentions.

The Post featured a twitter user’s reply to Noah’s vaccine video and used it in the report. “This seems to be spreading an anti-vax point of view,” the reply read.

“If Trevor Noah can’t make a few jokes about vaccine profiteering does that mean all criticism is off the table forever,” asked Brand?

“Why would we not want [Noah’s comments] to be part of the conversation — knowing what we know — not only about big pharma but the function of global capitalism,” he asked?

We don’t need to do much research on pharmaceutical giants like Johnson & Johnson and Pfizer or even Moderna, to find there have been many examples of profiteering in their past, Brand said. “ … the evidence is out there, the court cases have taken place and the settlements have been issued.”

Brand added: “So saying profit is the motivation of a corporate enterprise is not a slanderous assertion —  it is literally the function of those organizations.”

Defending Noah’s comments, Brand said, “queries and questions must take place” and “those of us who have the truth on our side have nothing to fear.”

Brand said if a newspaper is “only giving one side of the story and is leaving out all of the accompanying facts,” like how Moderna is, in fact, profiting from their COVID vaccines, and how Moderna’s stock price has risen exponentially since they began selling their COVID vaccines, “that’s not an accidental omission, that’s the management of information and that’s called propaganda.”