Exclusive: Man Whose Heart Was Damaged by Pfizer Vaccine Says ‘I Should Be Dead’

Robyn “Rob” Forbes, 41, led an active life as a business owner and sports enthusiast until he developed heart problems less than two weeks after receiving his first dose of Pfizer’s COVID-19 vaccine. 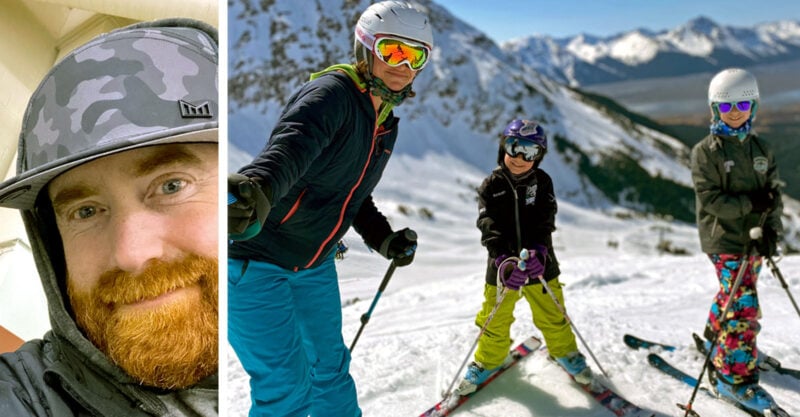 Robyn “Rob” Forbes had achieved one of the major goals in his life. In late 2019, he was able to transition to being a small business owner who could spend time with his two daughters and enjoy hockey, mountain biking and other activities.

Forbes’ fulfilling life came to a halt, however, shortly after March 4, 2021, when he received his first dose of the Pfizer COVID-19 vaccine.

Within days, Forbes began experiencing a succession of severe adverse events, ultimately resulting in him getting cardiac resynchronization therapy (CRT), a procedure that involves implanting a device in the chest to help correct serious heart rhythm problems.

In an exclusive interview with The Defender, Forbes described the vaccine-induced symptoms he experienced and the “anguish, pain and heartache” that followed and continue to impact his life. Forbes provided The Defender with extensive documentation to verify his claims.

‘Immense social pressure’ led him to get vaccine

“At the time of my injury,” said Forbes, “I was 175 lbs., lean, 5’11” and in the best shape of my entire life. I was able to be a dad and an independent business owner who got a lot of hockey and mountain biking in while not working.”

Forbes told The Defender that because his wife is a teacher, she and her family members were offered the vaccine relatively early, in March 2021. However, Forbes initially didn’t want the vaccine.

“I DID NOT [emphasis original] want to get the vaccine and was very vocal about it from the beginning,” he said.

However, he ultimately felt compelled to get vaccinated, telling The Defender:

“The immense social pressure, combined with the direction we were going, toward requiring it for travel, driving through Canada — I live in Alaska, of course — or to work or being a contractor, made me get to the point of ‘fine, I will likely be forced to at some point anyhow,’ so I did it.”

“I knew I did not need it,” he said. “But the other popular phrase at the time was that if you got it, the disease ‘stopped with you’ and that you were ‘protecting others’ by getting vaccinated. So, there is that. It certainly didn’t work out that way.”

Forbes said the pharmacy where he got the vaccine “did not record the batch number, or [provide] a card on the day of my first vaccination.”

‘I should be dead. I should not be here.’

Forbes said he “felt off” just a few days after getting the vaccine “while walking in the house.” He said:

“I had a severe episode of lightheadedness and had to suddenly take a knee and then sit on a bench in the entryway to avoid falling over. I had never felt that intense of a dizziness before but of course had felt lightheaded when standing too fast.

“Given that — I ignored it really and figured I was good. However, things became very clearly different on March 15, 2021, when things really took a dive.”

On that day, as he was walking back into the building at work on the ground floor, after lightly sweeping, he got “really dizzy.” He again took a knee and at that point was not comfortable at all standing.

“I had on an Apple watch and ran the EKG [electrocardiogram] right away when I noticed my pulse was fast and that I could feel my heart beat. My heart was at 226 bpm [beats per minute].”

He waited for things to calm down. “Because I was at work and relatively free with time, I paid attention to what was happening,” he said.

Forbes continued to take EKG’s at regular intervals, “fully expecting things to go back to normal and for all to be okay.” But it didn’t, he said:

“After about 10 minutes of it, I decided to call my then-PCP [primary care physician] and see what they said. It took 5 minutes for them to recommend that I go to the emergency room and that it wasn’t normal. I kind of laugh now, knowing what I know.”

Forbes waited another 5 minutes before, “begrudgingly,” he headed to the ER “with my heart still at 226 pm, in VTAC [ventricular tachycardia].”

Arriving at the emergency room, Forbes still didn’t realize the seriousness of the situation. He told The Defender:

“I arrived at the ER and waited in line, taking a knee to confirm the rate and rhythm was still the same because I was thinking I was going to ‘waste their time’ with this stupid problem that was no big deal.

“After about 5 minutes they brought me back to the triage room and slowly hooked up an EKG. IMMEDIATELY [emphasis original] upon placing the last lead, [the nurse] ripped them all off and pushed me into the ER where it all began. I was put under after the meds did not reset the rhythm and they shocked me back.”

Having survived 50 minutes in VTAC, and driving alone to the hospital, Forbes said he feels lucky to even be alive:

“I should be dead. I should not be here. ALL [emphasis original] of the doctors I have seen read the story of the onset and question the ‘50 minutes in sustained VTAC, driving to the ER’ and kind of laugh a little.

“I should be dead. I have often wished, since then, that I would have been.”

Forbes described a very long battery of examinations, medical visits and ongoing serious symptoms. “I have been through a lot with doctors,” he said.

He was originally diagnosed with AVRC (arrhythmogenic right ventricular cardiomyopathy), “which was a VERY [emphasis original] heavy carry for an active person like me.”

This led Forbes to search out specialists for that type of diagnosis, locating them at Johns Hopkins University, which he visited in May 2021.

At Johns Hopkins, “the genetic testing came back negative and they indicated the scarring pattern on my heart was more indicative of sarcoidosis instead of AVRC, which was a HUGE [emphasis original] relief but still made no sense.”

Sarcoidosis is a disease characterized by the growth of tiny collections of inflammatory cells (granulomas) in any part of the body. The cause of sarcoidosis is unknown, but experts think it results from the body’s immune system responding to an unknown substance, according to the Mayo Clinic.

The diagnosis led Forbes to again seek out experts. He found them at the Heart Institute at the University of Washington, where “They confirmed a ‘probable’ sarcoidosis diagnosis,” he said.

“This was without any supporting symptoms or positive nuclear PET scan to confirm,” Forbes remarked. “This never should have been confirmed. There was no sarcoid anywhere else, never had been, nor any symptoms.”

For Forbes, this diagnosis “was just the best answer they had because they were ignoring the obvious, as did the first doctor in Alaska,” referring to a connection between his symptoms and the COVID-19 vaccine he received.

“When playing hockey in January of 2022, I went into sudden VFIB [ventricular fibrillation], heart rate 300-plus, and blacked out.

“My CRT saved my life and brought me back. It created an urgency to figure this out because that was a bad omen all around.”

It was during a subsequent visit to the Mayo Clinic in Rochester, Minnesota, that doctors provided him with a more accurate diagnosis. 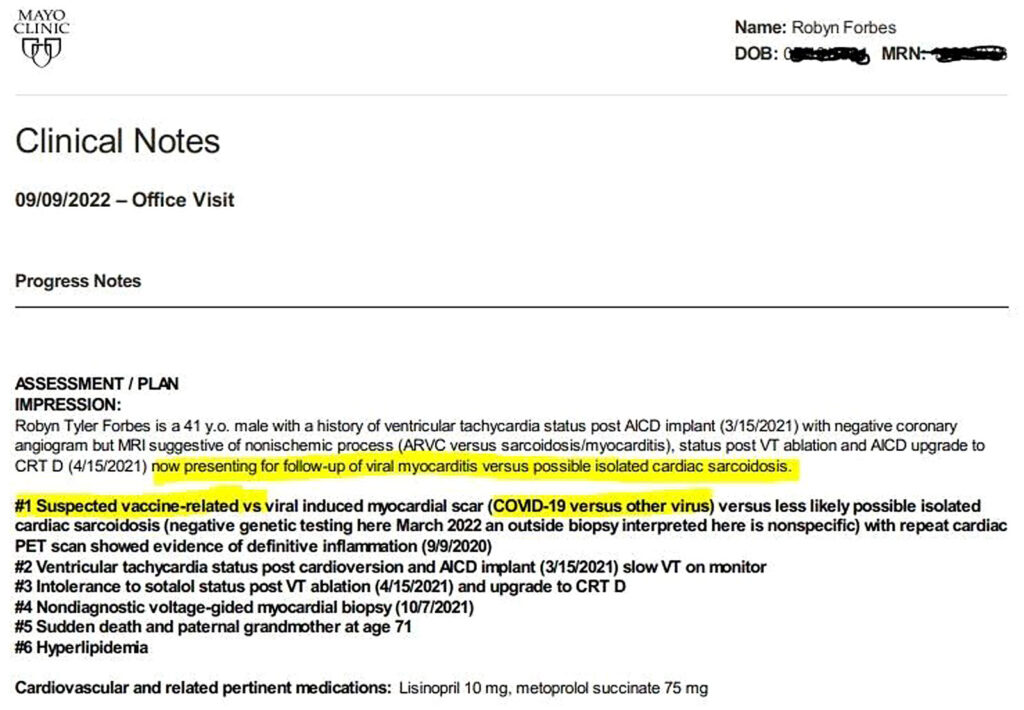 “I then went to Mayo in Rochester with a probable sarcoid diagnosis with an attempt to do all the testing over and to confirm once and for all what happened. They, again, found nothing and started to lean towards viral damage to my heart tissue which my doctor in Alaska started to also believe after this. We did a six-month follow up with more invasive nuclear testing and, again, nothing.

“I now have my diagnosis as clearly being number one vaccine-induced versus viral myocarditis per the Mayo Clinic.”

Forbes said he is now “stable on a day-to-day basis. He credits his CRT implant as having been successful, telling The Defender it “saved me once so far.” He also continues to take Metoprolol, a beta blocker, “for rhythm issues,” which he said is effective.

“I am in a stable place thanks to luck, my fitness, and my ability to access quality medical care,” he said. However, he added, “There is no description of the anguish, pain, and heartache this has caused.”

“Being shunned, told your injury is not real, or that you have no ability to find accountability for all of this is hard,” he said. “I have been told so many times that ‘nobody held a gun to your head’ to get the shot. Or that it’s ‘safe’ for most, so we just keep getting the shot.”

Even having overcome the worst of his symptoms, Forbes described how the aftereffects of the COVID-19 vaccination are continuing to affect his life and his personal relationships today:

“I have disconnected from people I love. I fail to see the purpose in life many days. I have spent two-plus years in a constant state of confusion and fear with regard to all of this COVID stuff.

“I took the shot because I was told it was safe and effective and that it would protect others. None of that was or is true. And now I am being told that I am not harmed by it, and, even if so — that nobody is responsible. Wow. Discarded like trash.”

Forbes also noted that his doctors were not even familiar with the Vaccine Adverse Event Reporting System (VAERS), telling The Defender:

“Frankly, none of the doctors or doctors’ offices even knew what VAERS was. I had to explain it to them.

“Given that – I would love to know why we are being told that the VAERS stats are simply inflated and not legit.”

“It makes me feel like I am not alone,” he said. “It shows me — which I know, firmly — that I am not crazy, that others are here with me and the comfort of that goes deep.”

He added: “I want to love, live and be myself again, but until this is accounted for, I do not know that I can.”