Listen as Robert F. Kennedy, Jr. interviews Riverkeeper Nelson Brooke, spokesman and patrolman for the Black Warrior River watershed in Alabama, on how he is fighting back against powerful, entrenched interests. 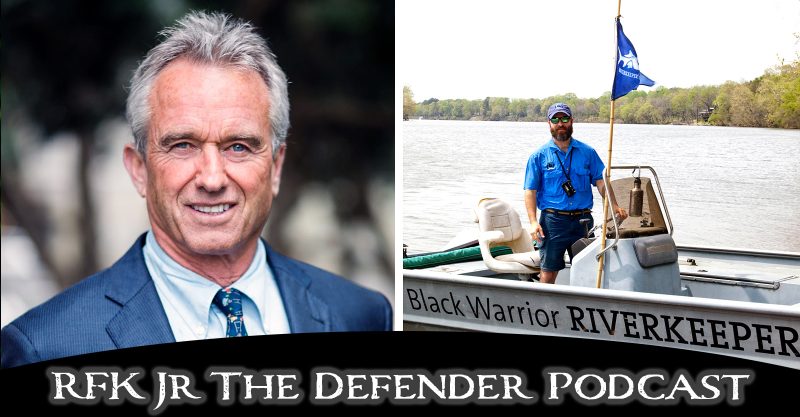 The Black Warrior Riverkeeper organization is the muscle that help keep Alabama’s watershed clean by standing up to major polluters, holding them accountable when state and federal agencies fail to act.

Riverkeeper Nelson Brooke, spokesman and patrolman for the Black Warrior River watershed in Alabama, told Children’s Health Defense Chairman Robert F. Kennedy, Jr. on the “RFK Jr The Defender Podcast” that in the south, elected officials and politicians have handed the keys to polluters and allowed them to get rich by polluting the state and sickening its citizens.

“A lot of us don’t even realize that we’re unfortunately being exposed to all of this stuff. So we’re having to fight really hard to educate the public about all these problems and fight these really entrenched, powerful interests who are used to getting their way. And unfortunately, that comes with fighting the elected officials and the regulatory agencies that are also essentially bought and paid for. They’re captured as a part of this fossil fuel pollution-generating wealth machine.”

The Black Warrior Riverkeeper uses the Clean Water Act and other environmental statutes to hold corporate polluters accountable in federal court. They often build their cases by collecting water samples from pipes that discharge pollution, and have the samples analyzed in a lab.

One of the biggest polluters in Alabama is the coal industry. The coal ash generated by power plants is incredibly toxic, said Brooke. And it’s not just a local issue — it’s a global problem, as the coal ash is shipped all over the world.

The organization works with folks from all backgrounds, connecting around the common belief that we all have a right to clean water, and we shouldn’t have to fight for it. They are looking to the future and fighting for a better one. Their goal is to leave the state better than they found it for future generations, Brooke said.