Learning Suffers When Classrooms Heat Up

Learning suffers when classrooms are overheated, and exposure to extreme heat causes a number of adverse health consequences for young people. These dangerous effects fall most heavily on low-income students and students of color. 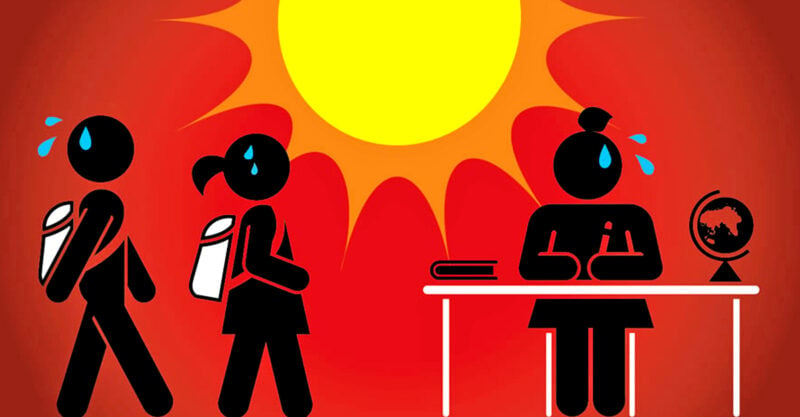 By Sverre LeRoy and Richard Wiles

As brutal heat waves creep further into the school year, cash-strapped school districts that previously didn’t need cooling systems are struggling to afford the air conditioning they now need to keep students safe in the face of climate change.

Hundreds of school districts are experiencing three to four additional weeks of temperatures hotter than 80 degrees during the school year than they did before 1970.

For large school systems with older buildings, the costs of installing and maintaining cooling and ventilation systems can easily run into the hundreds of millions of dollars — money that most school systems simply don’t have.

When temperatures spiked last month, public schools in Baltimore and Philadelphia sent students home early rather than keep them in unsafe classrooms without air conditioning and adequate ventilation.

With searing temperatures driven largely by climate change baking much of the country this week, schools in Milwaukee and Detroit did the same.

Learning suffers when classrooms are overheated, and exposure to extreme heat causes a number of adverse health consequences for young people.

These dangerous effects fall most heavily on low-income students and students of color.

Last year, the Center for Climate Integrity and Resilient Analytics calculated for the first time how much it has — and will continue to — cost America’s public schools to keep their classrooms at a safe temperature for students and teachers as the planet warms.

Our study, Hotter Days, Higher Costs: The Cooling Crisis in America’s Classrooms, found that K-12 public schools in the U.S. that did not need air conditioning in 1970 will face $40 billion in equipment costs by 2025 to install HVAC systems that meet current engineering and public health criteria.

Schools that already required air conditioning in 1970 will need to spend $415 million to upgrade those systems to cope with hotter school days.

Operating and maintaining this new equipment will cost more than $1.5 billion per year or $46 billion over the 30-year life of a typical HVAC system.

These cooling costs span the nation.

As a society, we place huge demands on public schools, even as many are starved for resources. More than half the nation’s school buildings have deferred major capital improvements such as leaking roofs or failing heating systems.

Beyond teaching, schools are expected to feed our children — schools provide 30 million free or heavily discounted lunches a day — counsel them, and now more than ever, keep them safe.

These same schools must also now cope with a myriad of expenses related to COVID. All of these costs potentially divert resources from a school’s main job, teaching young people.

From building seawalls and hardening ports to modifying sewage systems and cooling public buildings, upgrading public infrastructure costs more than it did 50 years ago due to added capacity and defenses made necessary by increasing global temperatures.

Few of these costs have been calculated, attributed to climate change, and more importantly, linked to the people responsible.

Executives at major oil and gas corporations knew decades ago that their products would cause unprecedented and catastrophic climate change, but they decided to lie about it and pollute the public discourse with climate denial instead of doing the right thing.

Six states, 20 municipalities, and the District of Columbia are currently fighting in court to hold corporate polluters like ExxonMobil, Shell, BP, and Chevron accountable for their climate deception.

While the oil industry rakes in record profits — nearly $100 billion in the first quarter of this year — public schools are paying the price for their climate pollution and disinformation.

As parents, officials, teachers, and taxpayers grapple with the price tag and trade-offs necessary to keep schools at safe temperatures for students, we must hold polluters to the same standard we teach our children: As any kindergartener knows, when you make a mess, you have to clean it up.

Oil and gas executives turned up the heat in these classrooms; they need to pay their fair share to cool them down.

Sverre LeRoy is a climate scientist at the Center for Climate Integrity.

Richard Wiles is executive director of the Center for Climate Integrity.