At least 155 more protesters were arrested outside the White House Tuesday as part of a weeklong “People vs. Fossil Fuels” action pressuring President Biden to declare a climate emergency and end all new fossil fuel projects. 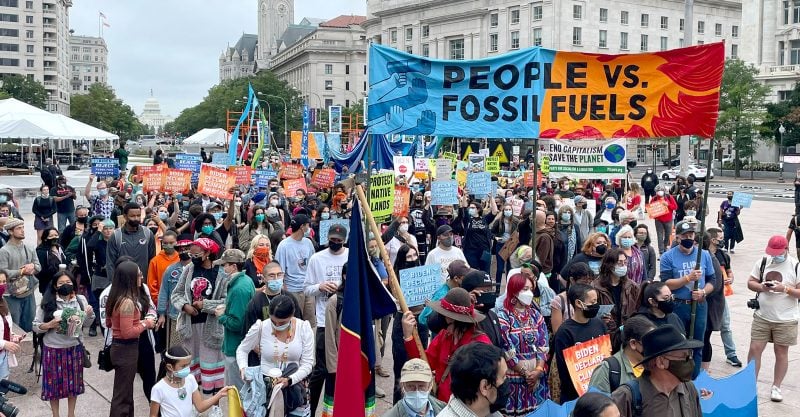 At least 155 more protesters were arrested outside the White House Tuesday as part of a weeklong action pressuring President Joe Biden to declare a climate emergency and end all new fossil fuel projects.

We are at the White House with a clear message.

“With the power of a pen, President Biden could stop these pipeline projects,” Joye Braun of the Indigenous Environmental Network, one of the groups leading the week of action, said in a statement.

“He promised he would listen to us. He’s not listening,” Braun added. “We’re coming every day of this week to tell Biden: Stop this madness.”

More than 330 U.S. research scientists sent a letter to President Biden urging him to use his executive authority to stop all new fossil fuel projects + declare a climate emergency. @CenterForBioDiv https://t.co/4CsDr1Gz5Q

Kayley Shoup, a community organizer with Citizens Caring for the Future, a grassroots group in New Mexico that’s battling fossil fuel drilling on public lands, noted that “we are not seasoned activists, but we are community members forced to take action by the impact of living with oil and gas.”

Highlighting the president’s public commitments to slash methane emissions and other planet-heating pollution in line with the Paris climate agreement, Shoup called on Biden to “put a ban on federal oil and gas leasing.”

BREAKING: Activists deliver petition with over 1,000,000 signatures to the Army Corps of Engineers to #StopLine3 #PeopleVsFossilFuels pic.twitter.com/hLlJaobr7C

Over the past two days, demonstrators have repeatedly drawn attention to Biden’s climate pledges, going back to the campaign trail.

“This is President Biden’s moment to keep his word,” said Dana Johnson, senior director of the strategy and federal policy office at WE ACT for Environmental Justice.

“This is a moment to fully, truly, wholly invest environmental justice into the operations of our federal government,” Johnson said, addressing Biden directly. “This is a moment to take the advice of the 27 environmental justice leaders that you put on an advisory panel. This is your moment, President Biden, to be the man of faith that you declare you are.”

NOW: Over 150 Indigenous leaders, people of faith + allies are being arrested by police at the White House at #PeopleVsFossilFuels action.

Two days in & it’s clear — Joe Biden would rather arrest hundreds in his doorstep than stop fossil fuels.

A “large interfaith contingent” that included Buddhists, Christians, Hindus, Jews and Muslims joined Tuesday’s action against fossil fuels, according to organizers. Some of the leaders explained their decisions to participate in the protest.

“I’m here at the White House to respond to the call of Indigenous leaders with faith leaders from all over the country to put our bodies on the line to tell President Biden that we must stop drilling for fossil fuels,” said Rabbi Jennie Rosenn, founder and CEO of the Jewish group Dayenu.

“This is the moral call of our time [and] if we have any chance of building a just and sustainable future for all people for all generations to come, now is the time,” she said. “The future of humanity is at stake and if there was ever a time to stretch beyond our comfort zone, now is the time.”

The Indigenous leader is Raymond Kingfisher, an enrolled member of the Northern Cheyenne Nation, and a longtime American Indian Community Activist.

Rev. Fletcher Harper, an Episcopal priest and the executive director of GreenFaith, said that “I’m here because the Earth is a sacred gift and fossil fuels are absolutely destroying it.”

Imam Saffet Catovic, a Muslim community organizer and environmental leader, said that “I’m here today for my grandchildren and future generations” and “because it is a moral imperative in Islam’s teachings to care for Mother Earth.”

“Mother Earth is being ravaged and destroyed by the pipelines that are extracting the energies from hell,” Catovic said. “We’re in a climate emergency and it is high time that this administration honor its campaign and post-campaign promises to put an end to the fossil fuel industry as we know it and allow for us to truly build back better.”