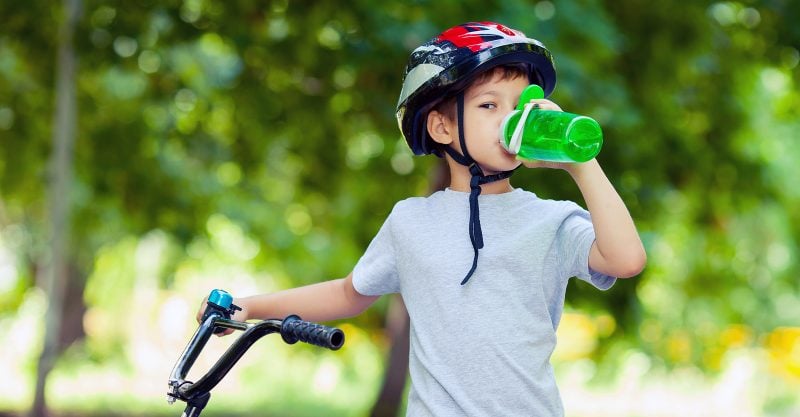 Reusable plastic sports bottles can leach hundreds of different chemical substances into water, including a range of plasticizers, endocrine disruptors and surprisingly, an insect repellent.

Researchers at University of Copenhagen, Denmark recently published their findings in the Journal of Hazardous Materials, calling for caution in the use of these products.

“We were taken aback by the large amount of chemical substances we found in water after 24 hours in the bottles. There were hundreds of substances in the water — including substances never before found in plastic, as well as substances that are potentially harmful to health.

After a dishwasher cycle, there were several thousand,” says Jan H. Christensen, Ph.D., professor of environmental analytical chemistry at the University of Copenhagen’s Department of Plant and Environmental Sciences.

Scientists used three types of reusable plastic sports bottles, split between newly purchased and bottles that had been in regular use before the experiment. Glass bottles were used as a control.

A second experiment placed all the bottles in the dishwasher and ran the dishwasher for 60 minutes, employing a typical dishwasher tablet, reaching temperatures of roughly 150 degrees Fahrenheit. One day after dishwashing, researchers filled the bottles with tap water and stored them for 24 hours.

Samples were analyzed using liquid chromatography and mass spectrometry in attempts to identify the materials leaching into water after the aforementioned experiments.

In total, scientists found over 400 materials associated with plastics and greater than 3500 dishwashing compounds.

DEET was confirmed to be present in every plastic bottle tested. Scientists indicate that DEET’s presence is likely a result of another chemical with a similar chemical structure to DEET.

In particular, the plasticizer material laurolactam is implicated. Either the plasticizer was produced with impurities that mimic DEET, or it was transformed into DEET in the dishwasher through a chemical reaction with other materials in the plastic bottles.

The scientists opine that the identification of DEET may in fact be the source of ubiquitous DEET detection in the environment.

A phenomenon that has long been ascribed to its use as a repellent, the widespread presence of DEET in the natural world by chemical happenstance may be yet another side-effect of a world where chemical pollution has exceeded the safe limits for humanity.

“The study exemplifies how little knowledge there is about the chemicals emitted from the products that our food and drink come in contact with. And, it is a general problem that measurement regulations during production are very lenient. Fortunately, both in Denmark and internationally, we are looking into how to better regulate this area,” says Christensen.

In the U.S., there is little evidence of government regulators embracing such a precautionary approach. To correct course, the U.S. Environmental Protection Agency and other government regulators must embrace an approach that incorporates cutting-edge science into product approvals. Take action today to urge the agency to adopt this approach.