‘People Not Profit’ at Center of Worldwide Youth Climate Protest

From Dhaka, Bangladesh to Turin, Italy and beyond, youth climate strikers took to the streets across the globe Friday to demand political leaders stop ignoring the science and take action to slash carbon emissions. 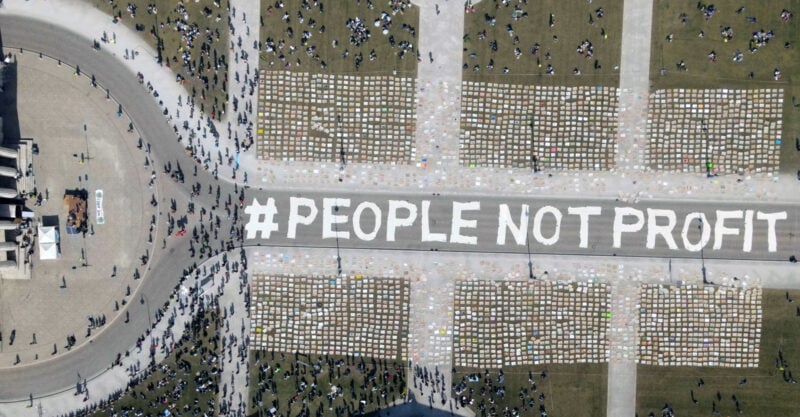 From Dhaka, Bangladesh to Turin, Italy and beyond, youth climate strikers took to the streets across the globe Friday to demand political leaders stop ignoring the scientific community’s deafening alarm bells and take action to slash carbon emissions before it’s too late.

Organized by the international Fridays For Future movement, the latest mass demonstrations stressed that worsening global class inequities and the climate emergency are deeply intertwined and must be tackled together — a message encapsulated in strikers’ rallying cry of “People Not Profit.”

“We live in a broken system, one where the richest 1% of the world population are responsible for more than twice the pollution as the poorest 50%,” Iris Zhan, campaign coordinator for Fridays For Future Digital, said in a statement.

“That’s why we strike today to demand climate reparations to kickstart a transformative justice process in which political power returns to the people.”

As Fridays For Future organizers put it in their preview of the new global strikes, “Climate struggle is class struggle.”

“The wealthier countries that have had the greatest impact on climate change need to provide the necessary funding and aid,” Chukwama Paul, communications lead for the Loss and Damage Youth Coalition, said Friday.

“We are amplifying the need for the redistribution of wealth to help victims of loss and damage,” said Paul.

The worldwide strikes come nearly a month after the Intergovernmental Panel on Climate Change released its latest report warning that the continued burning of fossil fuels is driving a “dangerous and widespread disruption in nature,” doing “irreversible” damage to marine and coastal ecosystems and threatening the prospect of a livable planet for future generations.

“The facts are undeniable. This abdication of leadership is criminal,” United Nations Secretary-General António Guterres said in response to the report. “The world’s biggest polluters are guilty of arson of our only home.”

A separate analysis published earlier this week by the United Kingdom-based Tyndall Centre for Climate Change Research estimated that rich countries must cut off their oil and gas production entirely by 2034 to give the world a 50% chance of limiting warming to 1.5°C by the end of the century.

The report emphasized that “an equitable transition will require wealthy high-emitting nations make substantial and ongoing financial transfers to poorer nations to facilitate their low-carbon development, against a backdrop of dangerous and increasing climate impacts.”

Farzana Faruk Jhumu, a climate activist with Fridays for Future in Bangladesh, wrote in an op-ed Friday that young people across the globe “are asking world leaders to put #PeopleNotProfit at the center of the planet’s future.”

“Bangladesh, where I am from, contributes to only 0.21% of global carbon emissions, but we are facing cyclones, floods and droughts every year caused by global warming,” Jhumu continued.

“To ensure justice for the Global South, world leaders must understand their responsibility. The current system is widening the inequality gap — it has no place in our society.”