Reacting to truck blockades in Ottawa and at the U.S. border, Ontario Premier Doug Ford today declared a state of emergency and said he will convene the provincial cabinet on Saturday to enact orders that make it “crystal clear” it is illegal to block critical infrastructure. 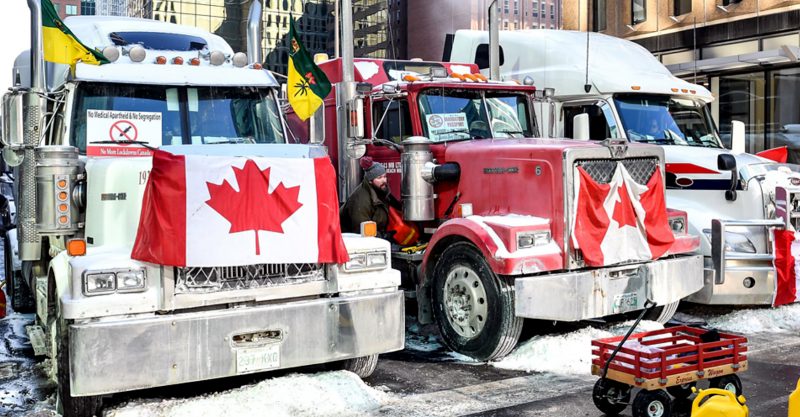 Reacting to truck blockades in Ottawa and at the U.S. border, Ontario Premier Doug Ford today declared a state of emergency.

Ford said he will convene the provincial cabinet on Saturday to enact orders that make it “crystal clear” it is illegal to block critical infrastructure.

The move came after the Biden administration on Thursday urged Prime Minister Justin Trudeau’s government to use its federal powers to end the truck blockade by Canadians protesting the country’s COVID-19 vaccine mandates.

Scores of truckers, part of the Freedom Convoy, since Monday have been blocking the Ambassador Bridge connecting Windsor, Ontario, to Detroit, disrupting the auto industry on both sides of the border.

The Freedom Convoy left Canada’s westernmost province, British Columbia, on Jan. 23 and arrived Jan. 29 in Ottawa, where protesters said they will remain until the COVID vaccine mandates are lifted.

The group has been raising money through donations to online fundraising sites, most recently, the Christian GiveSendGo site.

GiveSendGo today said it will defy a Canadian court order mandating it stop distributing funds to convoy protesters, stating on Twitter that Canada has “absolutely ZERO jurisdiction over how we manage our funds.”

Know this! Canada has absolutely ZERO jurisdiction over how we manage our funds here at GiveSendGo. All funds for EVERY campaign on GiveSendGo flow directly to the recipients of those campaigns, not least of which is The Freedom Convoy campaign.

According to CNN, the Superior Court of Justice in Ontario granted a restraining order requested by the Government of Ontario against GiveSendGo and others.

Ontario Attorney General spokesperson Brian Gray told CNN the order prohibits, “any person from disposing of, or otherwise dealing with, in any manner whatsoever, any and all monetary donations made through the Freedom Convoy 2022 and Adopt-a-Trucker campaign pages on the GiveSendGo online fundraising platform.”

The Freedom Convoy turned to GiveSendGo after GoFundMe, another online fundraising site announced it would not turn over nearly $9 million in donations raised through the site for the truckers.

Texas Attorney General Ken Paxton said Wednesday that his office will investigate GoFundMe for blocking and withholding donations already made to the platform through its website, stating that the move may violate the state’s Deceptive Trade Practices Act, he said.

The truckers also raised nearly $900,000 in bitcoin after GoFundMe said it would not release donations raised through its platform.

In recent days, protesters have obstructed access to three border crossings in Michigan, North Dakota and Montana with the help of like-minded demonstrators on the U.S. side of the border who also are protesting vaccine mandates and passports, CNN reported Thursday.

The U.S. Department of Homeland Security (DHS) on Tuesday warned law enforcement across the country that a possible convoy of truckers starting up in the U.S. could affect Sunday’s Super Bowl in Los Angeles.

DHS said it received reports of truck drivers planning to potentially block roads in major metropolitan cities in the United States in protest of, among other things, vaccine mandates for truck drivers.

According to the agency:

“While there are currently no indications of planned violence, if hundreds of trucks converge in a major metropolitan city, the potential exists to severely disrupt transportation, federal government operations, commercial facilities and emergency services through gridlock and potential counter protests.”

The warning was circulated to law enforcement nationwide on Tuesday and was first reported by Yahoo News.

DHS on Monday released a “Summary of Terrorism Threat to the U.S. Homeland” bulletin stating the U.S. remains in a “heightened threat environment fueled by several factors ….”

Among the factors listed, was: “the proliferation of false or misleading narratives, which sow discord or undermine public trust in U.S. government institutions.”