NewYork-Presbyterian Hospital pulled a 30-second ad about myocarditis in children after Children’s Health Defense and numerous doctors accused the hospital of normalizing and trivializing the condition. 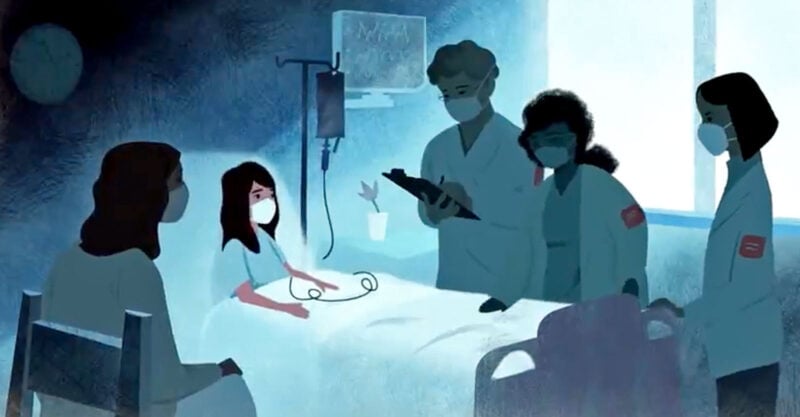 A New York hospital pulled a 30-second ad about myocarditis in children after Children’s Health Defense (CHD) and numerous doctors accused the hospital of normalizing and trivializing the condition.

NewYork-Presbyterian Hospital in early September published the 30-second ad, which promoted the medical center’s pediatric services for treating the condition.

The hospital pulled the ad amid public outcry following three CHD.TV episodes featuring discussions about how the ad appeared to normalize and trivialize myocarditis in children. CHD.TV is produced by Children’s Health Defense.

“I’ve been into fashion since I can remember,” Suri said in the ad. “But one day, I had a stomachache so bad I didn’t want to do anything.”

“The team at NewYork-Presbyterian said it was actually my heart. It was severely swollen — something called ‘myocarditis.’

“But doctors gave me medicines and used machines to control my heartbeat. They saved me. So now I can become the next great fashion designer.”

The ad ended with the caption “Stay Amazing” and then faded to the hospital’s logo, without any mention of what may have caused the potentially fatal heart condition.

Data from the Centers for Disease Control and Prevention (CDC) show a strong link between cases of myocarditis and COVID-19 vaccines.

VAERS is the primary government-funded system for reporting adverse vaccine reactions in the U.S. Historically, VAERS has been shown to report only 1% of actual vaccine adverse events.

‘ … they make a ton of money on providing medical help.’

“I almost have no words for this type of advertisement,” said Aimee Villella McBride, CHD director of communications, in a Sept. 9 episode of CHD.TV’s “Friday Roundtable.”

“It left me speechless the first time I saw it,” she said.

Summit News on Sept. 16 called out the hospital’s commercial for treating myocarditis in children “as if it’s a common illness.”

Dr. Vinay Prasad, a hematologist-oncologist and professor of epidemiology and biostatistics at the University of California, San Francisco, retweeted the ad on Sept. 18, adding his own questions and comments.

Why would anyone try to normalize myocarditis, when it is easy to try to reduce it?
Lower doses
Space out doses
No moderna & Fewer doses in young men
Exemptions for future doses for people who already had COVID19

All preferable to TV ads hinting heart inflammation is no biggie https://t.co/DrOOAzqLkO

On Sept. 19, America’s Frontline News said the ad targeted children and noted that myocarditis is a “hallmark side effect of the COVID-19 injections.”

And in the Sept. 19 episode of CHD.TV’s “This Week,” Mary Holland, CHD president and general counsel, pointed out the significance of the ad, noting that NewYork-Presbyterian, which is affiliated with Columbia University, is not “any old hospital.”

“This is one of the biggest and most prestigious hospitals in New York City,” Holland said.

Holland highlighted how the girl in the ad says the hospital’s doctors “saved me.”

“They are the people — if they gave her a COVID shot — that caused myocarditis. They first injured her. They made a little bit of money on that. And then they made a ton of money on providing her medical help.

“And they lied to her about what the cause might be. I think they also neglected to say that myocarditis can result in needing a heart transplant within a matter of years.”

‘They make a little bit of money on [the shot], + then they make a ton of money on providing medical help.’ — Mary Holland on recent NY Presbyterian Myocarditis ad

‘This is turning the healthcare system against the people.’ #ThisWeek #CHDTVhttps://t.co/rLDXWMB3Yq

On Sept. 22, Tucker Carlson of Fox News  discussed the ad with Dr. Marty Makary, a researcher at Johns Hopkins University, who early on warned the CDC that they needed to “rigorously study the long-term effects of vaccine-induced myocarditis.”

“Severe heart damage in otherwise healthy children” is not something “we’ve always had” happening, Carlson said. “What type of life will someone have at age 50 when they suffer unnecessary heart damage as a child?”

That same evening, Dr. Peter McCullough, an internist and cardiologist in Dallas, Texas, retweeted a clip of the Fox news interview with Makary, with this comment:

Dr. Mackary on with Tucker Carlson. Long term effects of myocarditis devastating and far more common than the CDC led Americans to believe. Tucker asks: “What type of life will someone have at age 50 when they suffer unnecessary heart damage as a child?” pic.twitter.com/wiPxNWTSw2

The next day, McCullough pointed out during the Sept. 23 episode of CHD.TV’s “Friday Roundtable” that there have been many fatal cases documented of vaccine-related myocarditis.

He pointed to a U.K. study published in August that reported 100 deaths due to vaccine-related myocarditis.

Sometime between Sept. 23 and Sept. 29, the hospital pulled the ad, which is still available on alternative media sites. The original youtube video is listed as private.

The Defender reached out to NewYork-Presbyterian’s public relations department to inquire about the ad and why it was pulled, but officials there did not respond by deadline.