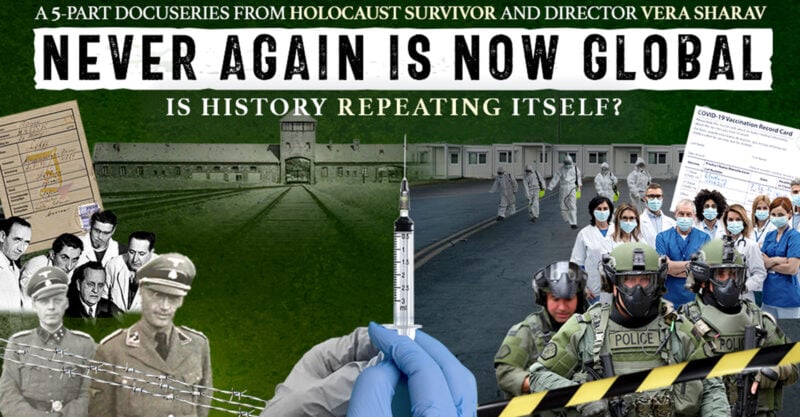 The Alliance for Human Research Protection, founded by Holocaust survivor and human rights activist Vera Sharav, produced the film and Sharav directed it.

Each one-hour episode focuses on recent testimonies by Holocaust survivors and their descendants who discuss comparisons between the early repressive stages under the Nazi regime that culminated in the Holocaust and global COVID-19 policies.

Individuals featured in the docuseries explain how Nazi interventions — including the suspension of freedoms, imposition of lockdowns, coerced medical procedures and identity passports — are similar to modern-day dictatorial constraints on citizens worldwide.

“Until now, anyone who has attempted to draw attention to or make even modest comparisons between the present-day pandemic schemes and the Nazi era has invited a barrage of angry, sustained criticism from financially compromised Holocaust gatekeepers and corporate news media,” Sharav said. “We made the film to change that.”

In addition to testimonials and insights from Holocaust survivors and their families, the series also includes comments and analyses by historians, professors, doctors, rabbis, activists and scientists — one of whom was Pfizer’s former vice president and chief scientist — from around the world.

The 32 participants in the series tell their stories, share their opinions and deliver this urgent message: Today’s false narrative, suspension of freedoms, medical dictates and violations of human rights are reminiscent of the Nazi playbook. This time, the repressive measures are not limited to Jews — today’s false narrative targets the entire global population.

As a young child, the Nazis deported Sharav to a concentration camp, from which she narrowly escaped with her life. She encourages people to watch the docuseries with an open mind.

“The Holocaust was only possible because of mass obedience to authority,” Sharav said. “Our survival rests on our willingness to resist oppressive, unlawful orders.”

“Those who resisted — by falsifying their identity, by jumping off the trains to Auschwitz and joining the partisans — were more likely to survive than those who obeyed.”

During the docuseries, Sharav shares the story of her son Amikhai, who died from an adverse reaction to an allegedly “safe and effective” prescription drug doctors prescribed for him.

After her son’s death, Sharav became a full-time outspoken activist, founded the Alliance for Human Research Protection, a nonprofit organization whose “mission is to ensure that the moral right of voluntary medical decision-making is upheld,” and began to raise concerns about harmful medical practices and unethical medical experiments.