Media Coverage of Disasters Can Trigger PTSD in Kids 3,000 Miles Away. Here’s What Parents Can Do.

When disasters strike, the flood of images on TV and social media can have a powerful psychological impact on children — whether those children are physically in the line of danger or watching from thousands of miles away. 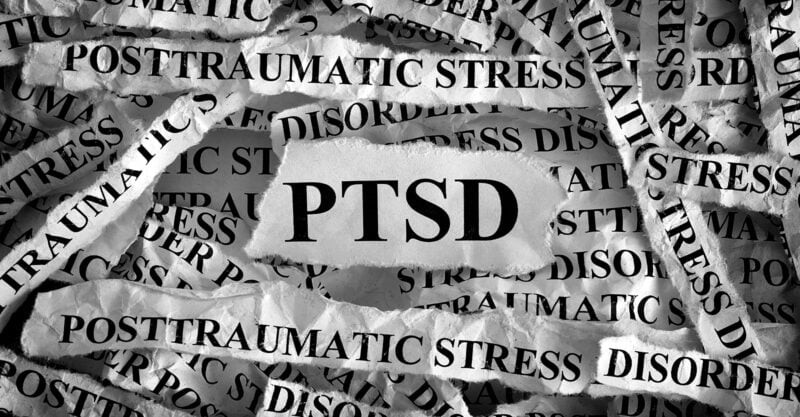 When disasters strike, the flood of images on TV and social media can have a powerful psychological impact on children — whether those children are physically in the line of danger or watching from thousands of miles away.

Our latest research uses brain scans to show how simply watching news coverage of disasters can raise children’s anxiety and trigger responses in their brains that put them at risk of post-traumatic stress symptoms.

It also explores why some children are more vulnerable to those effects than others.

This risk is important for parents and the media to understand. In just the past few months, news coverage has been saturated with images of wildfires burning through neighborhoods in Colorado, tornado damage across the Midwest, a school shooting in Michigan and news of rising illnesses from the COVID-19 pandemic.

With climate change, researchers estimate that today’s children will face three times as many climate-related disasters as their grandparents.

And the pervasiveness of social media and 24-hour news make exposure to images of disasters more likely.

As a neuroscientist and a psychologist who studies youth anxiety and the adolescent brain, we have been exploring ways to identify children who are most at risk.

Harm to some kids’ mental health, but not all

Exposure to disasters, in particular, can trigger post-traumatic stress symptoms, such as loss of sleep, intrusive thoughts about the experience, memory impairments or severe emotional distress.

But while around 10% of people who are directly exposed to traumatic events develop symptoms that are severe enough to meet diagnostic criteria for post-traumatic stress disorder or PTSD, a majority do not.

This also applies to children exposed to disasters and other traumatic events through media.

A once-dominant theory of disaster mental health, sometimes called the “bull’s-eye model,” proposed that the negative mental health effects of a disaster were directly related to how close the person was to the center of the event – the bull’s eye.

But more and more studies are finding that the negative mental health effects of disasters extend far beyond the immediate disaster area.

Sensationalized 24-hour news cycles on television and online are part of the reason, studies suggest. These media are designed to attract viewers and keep them engaged.

This is especially true for content on social media, which often contains more graphic images and scenes than typically broadcast by more traditional news sources.

So, why are some children vulnerable to these media influences, whereas others are not?

Our research points to preexisting and identifiable neurobiological profiles that can make young people especially susceptible to the harmful mental health effects of disaster-related news coverage.

When Hurricane Irma struck in 2017, we were able to use a national long-term research project that was already underway to study how children were coping both before and after the disaster.

We could look at the types of disaster exposure, and whether any preexisting characteristics could distinguish those children who went on to develop post-traumatic stress symptoms from those who did not.

We were able to more firmly establish whether changes were due to disaster and media exposure, and not something else.

The Adolescent Brain Cognitive Development study followed 11,800 children across the United States over a 10-year period using a variety of brain imaging and mental health assessments.

Three of the study sites — two in Florida and one in South Carolina — were hit by Hurricane Irma, one of the most powerful Atlantic hurricanes on record. 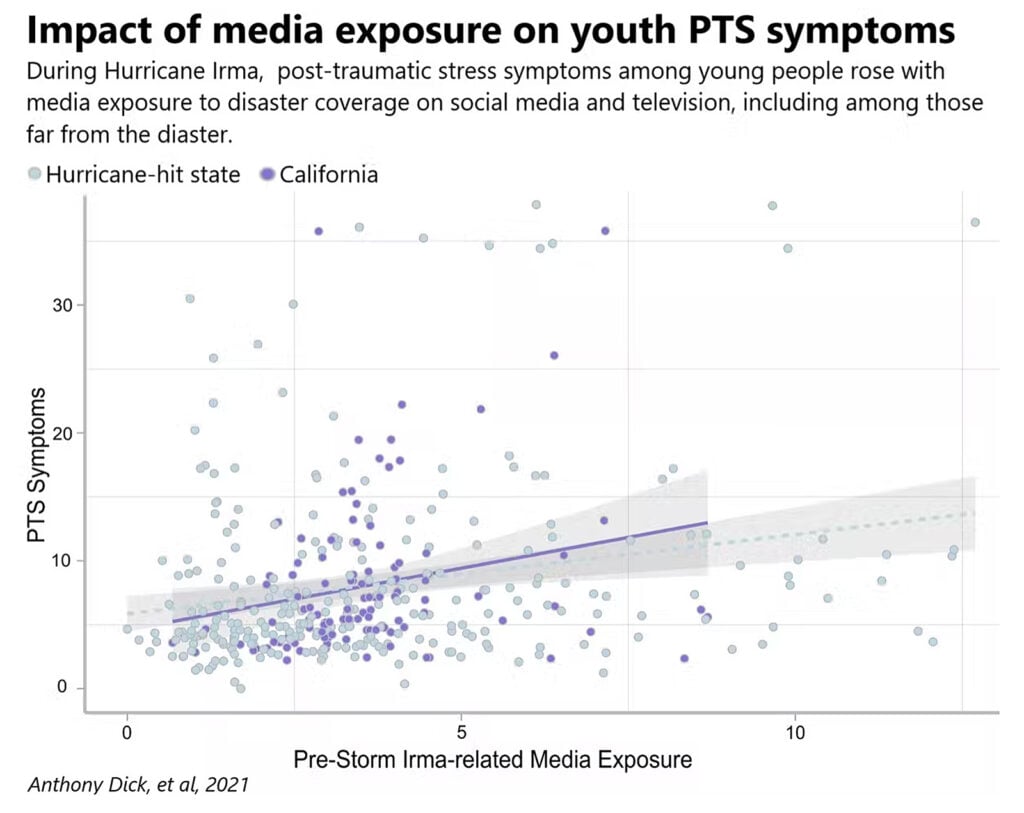 In the week before Irma made landfall, national media coverage provided highly dramatic, around-the-clock forecasting of the impending “catastrophic” storm and its threat of destruction of “epic proportions.”

Irma led to the largest human evacuation in U.S. history, about 7 million people.

After the storm, we collected additional data from about 400 of the project’s participants at the three sites affected by Irma and a demographically similar site on the other side of the country, in San Diego.

We assessed their exposure to the hurricane and to media coverage ahead of the storm, and the extent to which the child exhibited post-traumatic stress symptoms six to eight months after the storm when the children were 11 to 13 years old.

We found that greater media exposure was associated with higher reporting of post-traumatic stress symptoms — and the link was just as strong in San Diego youth as it was in Florida youth.

The association between media exposure and post-traumatic stress symptoms was strongest for those with a particular brain response in the amygdala, a brain area involved in processing fear and detecting potential threats.

Earlier in the study, many of the same children had been particularly reactive when viewing fearful facial expressions.

At the same time, their brain scans showed reduced activity in another region of the brain, the orbitofrontal cortex, thought to be involved in reducing emotional arousal.

What can parents do?

These findings highlight how children do not need to be in harm’s way or even close to a disaster to be affected by it — exposure to media coverage of a disaster can have a substantial impact as well.

They also suggest that there are identifiable vulnerabilities that might make some children more likely to be emotionally affected by media.

Scientists are increasingly interested in understanding what exposure to traumatic news coverage is doing to younger viewers who are still developing a sense of security.

Recent research has suggested that parents should also be concerned about children’s exposure to social media apps such as Instagram and TikTok.

So what can parents do?

While it is important for parents to get periodic updates about impending storms or fires, extended exposure to such content rarely provides additional actionable information. Intermittent check-ins of breaking news may be appropriate, but the TV and social media do not have to be on constantly.

It’s easy to routinely unplug, and it’s good for the mental health of children.

Dr. Jonathan S. Comer is a professor of Psychology and Psychiatry and director of the Mental Health Interventions and Technology (MINT) Program, an interdisciplinary clinical research laboratory devoted to expanding the quality, scope and accessibility of mental health care for youth.

Anthony Dick is a developmental cognitive neuroscientist who studies the neurobiology of language and executive function using diffusion-weighted and functional imaging.