A new study in Environment International found chronic exposure to increasing levels of glyphosate, the active ingredient in Monsanto’s Roundup weedkiller, may have consequences for manatees’ immune and renal systems. 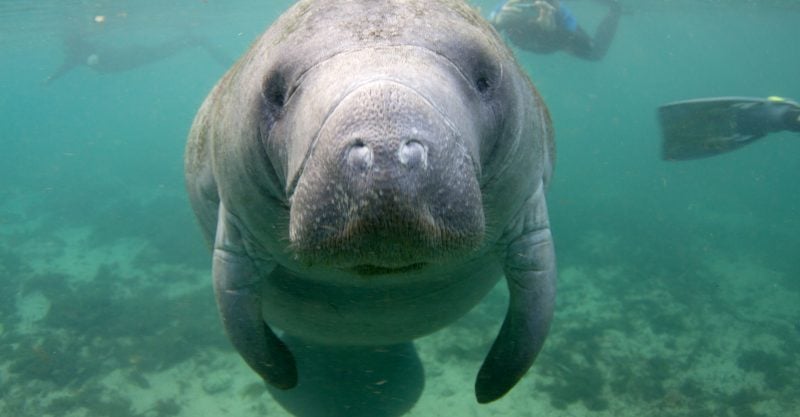 A scientific study published last week concludes that Florida manatees are chronically exposed to glyphosate because of application of the herbicide to sugarcane and aquatic weeds.

The study found glyphosate, the active ingredient in Roundup and the world’s most-used weedkiller, in the plasma of 55.8% of the Florida manatees sampled. The concentration of glyphosate in plasma has increased from 2009 to 2019.

Additionally, the study’s authors determined that glyphosate concentrations in the Caloosahatchee and St. Lucie rivers and Everglades Agricultural Area stormwater treatment areas were significantly higher before and during sugarcane harvesting, when glyphosate is more likely to be applied, than after harvest.

“Manatees are Exhibit A that Florida’s waters are in crisis and they shouldn’t be facing this kind of pesticide threat,” said Jaclyn Lopez, Florida director of the Center for Biological Diversity. “Our beloved, chubby sea cows are dodging boat strikes, reeling from red tide and starving in the Indian River Lagoon because of water pollution. It’s heartbreaking to add chronic glyphosate exposure to the list of factors threatening manatee survival.”

“The results of this recent study are cause for serious concern about the chronic use, fate and effects of glyphosate on the manatee population in south Florida,” said John Cassani of Calusa Waterkeeper. “An increasing trend for glyphosate in manatee plasma that correlates with concurrent increased usage of glyphosate is disturbing, especially at a time when manatee mortality is at very high levels. The authors report the same level of glyphosate exposure that manatees experience, causes kidney and liver damage in laboratory animals.”

The study found that the amount of glyphosate sprayed by the Florida Fish and Wildlife Conservation Commission to control aquatic weeds in Lake Okeechobee exceeded the sample waters, reaching up to 10,000 kilograms per year, and that the Army Corps’ Lake Okeechobee discharges result in high concentrations of glyphosate in the Caloosahatchee and St. Lucie rivers.

The study, published in Environment International, also found that manatees were exposed to glyphosate in non-agricultural areas, such as the Crystal River, and that exposure was higher during winter, when manatees depend on the warm water refuge.

The study concluded that the chronic exposure in Florida water bodies may have consequences for Florida manatees’ immune and renal systems, which may be further compounded by other environmental factors, such as red tide or cold stress.

Glyphosate is the most widely used herbicide, with about 280 million pounds a year used across 285 million acres in agriculture alone. Its total volume of application has increased by a factor of 12 from 1995 to 2014. The EPA recently determined that glyphosate’s labeled uses are likely to adversely affect 93% of all listed species and 96% of critical habitats, including the Florida manatee.

In 2010, in response to a petition filed by the Center, Defenders of Wildlife and Save the Manatee Club, the U.S. Fish and Wildlife Service determined that the revision of critical habitat was warranted. The Service found that the loss of Florida’s warm water habitats is one of the leading threats to manatees and that it was important to identify specific areas essential to the species’ conservation.

But the Service never revised the manatee’s critical habitat. Instead the agency downlisted the manatee to threatened in 2017 despite ongoing threats to the species and manatee habitat.