According to a report published Thursday by Public Citizen and the Groundwork Collaborative, since early 2021, corporations have swarmed Capitol Hill with lobbyists to prevent Congress from passing legislation aimed at curbing companies' ability to price gouge consumers at will. 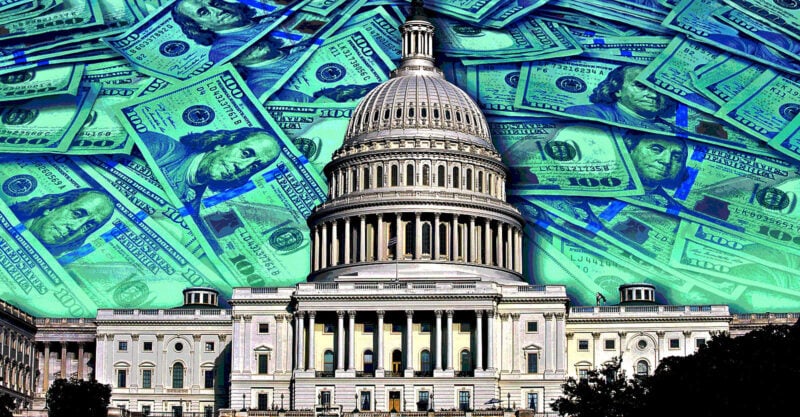 Since early 2021, corporations that have played a major role in pushing inflation to a four-decade high in the U.S. have swarmed Capitol Hill with lobbyists to prevent Congress from passing legislation aimed at curbing companies’ ability to price gouge consumers at will.

That’s according to a report published Thursday by Public Citizen and the Groundwork Collaborative, which scoured federal lobbying disclosures to examine how trade groups and individual corporations have worked to shield their pricing power at the expense of the consumers.

The new report focuses specifically on 27 anti-price gouging and profiteering bills, none of which have fully passed and many of which failed to reach the floor for a vote after powerful corporate lobbying organizations — such as the drug industry’s PhRMA and the Chamber of Commerce — “blanketed” the nation’s capital with influence peddlers.

According to the Public Citizen and Groundwork’s findings:

“Corporations opposed to anti-price gouging and profiteering bills were responsible for more than 2,600 lobbyist engagements on Capitol Hill, while supporters of such legislation had fewer than 300: a 9-to-1 advantage for big business.”

“H.R. 3, the Elijah E. Cummings’ Lower Drug Costs Now Act (the signature drug pricing reform bill of the Democrats in the House) resulted in 1,157 lobbyist engagements, the most of any bill in this analysis,” the report notes.

“Ninety-six percent of the engagements (1,110) came from corporations, trade groups, and non-profits opposed to the bill, giving the opposition a 24-to-1 advantage.”

By one measure, the pharmaceutical industry has spent at least $147 million to obstruct efforts to bring down drug prices during the coronavirus pandemic.

“Corporate America deployed its overwhelming lobbying power to stop anti-price gouging and profiteering legislation to protect their record profits. It’s all about money for them,” Mike Tanglis, a research director for Public Citizen and report co-author, said in a statement.

“But for millions of Americans, it’s about a lot more than just money. For those struggling to pay for prescription drugs, Big Pharma’s price gouging can be a matter of life and death.”

The measure was fervently opposed by the U.S. Chamber of Commerce and the American Petroleum Institute, whose member list includes ExxonMobil and Chevron — fossil fuel behemoths that both reported sky-high profits last week.

The Consumer Fuel Price Gouging Prevention Act, which passed the Democratic-controlled House without any GOP support but stalled in the evenly divided Senate, has drawn 83 total lobbying engagements, nearly three-quarters of them from opponents of the bill, according to Public Citizen and Groundwork.

Oil giants have also lobbied against a proposed windfall profits tax measure that has thus far failed to advance as prices at the pump remain elevated.

“This report highlights how the corporations fighting these bills have been the very ones responsible for jacking up prices on consumers and whose bottom line would be impacted the most if these bills were signed into law,” said Michael Mitchell, Groundwork’s director of policy and research and a co-author of the report.

“Congress must rein in the unchecked and outsized power these megacorporations hold over our economy.”

The report was released hours after the Federal Reserve announced yet another large interest rate hike despite growing warnings that its approach won’t tackle the primary drivers of inflation, including ongoing supply chain issues and corporate profiteering.

Fed Chair Jerome Powell didn’t mention the latter factor during his statement to the press on Wednesday, and reporters neglected to ask him a single question about it.

Josh Bivens of the Economic Policy Institute estimated in September that “rising profit margins have accounted for roughly 40% of the rise in prices” since the second quarter of 2020.