Researchers in Ireland recommended the immediate investigation of glyphosate as a desiccant before harvesting crops to better understand how this impacts non-target flowering plants growing near crop fields. 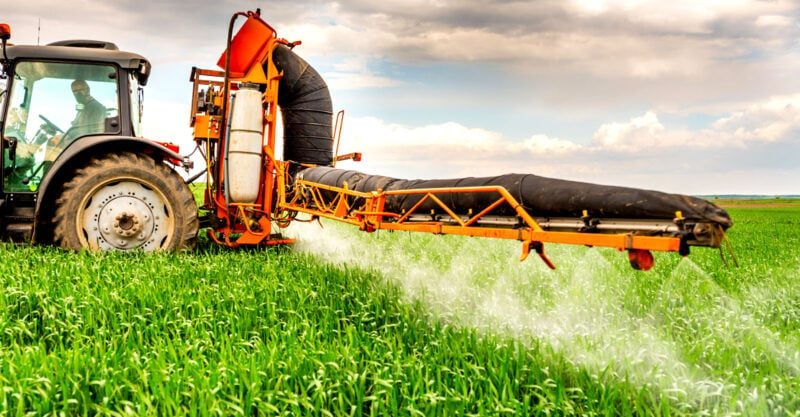 Glyphosate is the most frequently used weedkiller within the EU and is also very common in other parts of the world.

The residues Irish scientists found in nectar in this study exceeded the European maximum permitted levels of glyphosate in honey and honey bee products, which suggests they could be harmful to honeybees and those eating the honey.

Residues of glyphosate have previously been found in nectar and pollen collected by bees foraging on plants that have been selectively targeted with weedkiller, but this is the first time it has been reported in unsprayed wildflowers growing near sprayed fields.

Glyphosate is intended to only kill plants but it has been shown to harm the digestive systems of honeybees and bumblebees, which makes them more vulnerable to infections, and it may have other negative consequences.

This is the first time glyphosate has been reported in unsprayed wildflowers under conventional farming conditions and while more research is needed to find how much higher glyphosate concentrations would be in directly sprayed plants, the researchers stated that wild bees and honeybees will visit the contaminated wildflowers to collect pollen and nectar.

They will thus be exposed to glyphosate and that could impact their health and the critical pollination service they provide.

Pollinator losses are responsible for reducing global production of nuts, fruits + vegetables by 3-5%, and this loss of nutrient-dense food is directly harming the well-being of hundreds of thousands of people.https://t.co/3Sy3oX38aM

In three of the studied locations, glyphosate residues were found in the pollen and nectar of the blackberry flowers within a week after spraying took place. When the weedkiller was used as a pre- or post-emergence spray on oilseed rape crops (two months before sampling), no residues were detected.

Knowing that bees may be exposed to glyphosate residues in the environment makes it important that more research takes place to assess the glyphosate impact on multiple bee species.

The Trinity College Dublin scientists stated that they recommend the immediate investigation of glyphosate as a desiccant before harvesting crops to better understand how this impacts non-target flowering plants growing near crop fields to enable a greater evidence base for evaluation of the renewal of market authorization for glyphosate in the EU.