Eileen Iorio told RFK, Jr. on the “RFK Jr. The Defender Podcast” that while VAERS was created to protect children from vaccine injury by reporting adverse events to Congress, the government-funded reporting system has never followed through on that mission. 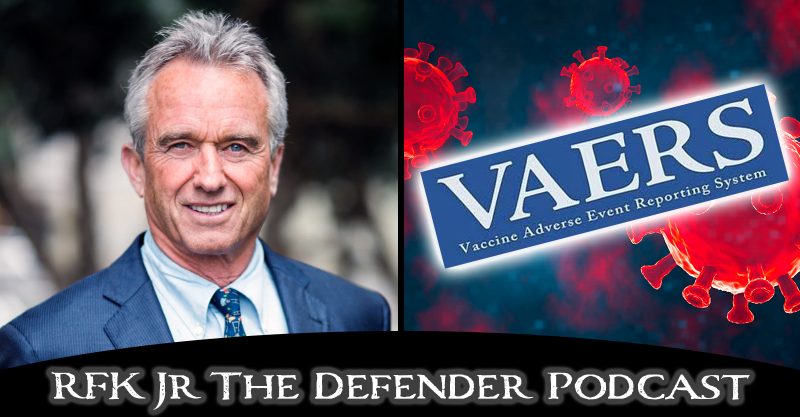 In a new episode of the “RFK Jr. The Defender Podcast,” Children’s Health Defense Chairman Robert F. Kennedy, Jr., vaccine safety advocate Eileen Iorio, Wayne Rohde, author of “The Vaccine Court,” and Stan Gotshall of the VaccineData project, discuss the failures of the Vaccine Adverse Event Reporting System, including why the system captures fewer than 1% of America’s vaccine injuries.

The government-funded system for reporting adverse vaccine reactions in the U.S. was created to protect children from vaccine injury. “It was supposed to trigger alerts and warnings,” said Iorio, mother of a vaccine-injured child and author of “HPV Vaccine On Trial.”

But what VAERS really does, Iorio told Kennedy, is exonerate vaccine makers from civil liability.

VAERS was designed to submit bi-annual reports to Congress on vaccine injury in children, but that never really happened, according to Iorio, who said, “Very little has been reported there until 2020-2021” — when COVID vaccines were rolled out.

While it’s unclear if the spike in the number of COVID vaccine adverse events is due to an increase in injuries, or is the result of better reporting, Iorio said COVID vaccine injuries now account for 30% of total adverse event vaccine reports recorded since 1990.

Kennedy said one of the reasons VAERS is so flawed is that it’s a voluntary system that relies mostly on doctors to report vaccine injuries.

“Doctors are taught in medical school that vaccine injuries are mythology. They also are disincentivized from reporting too many. Doctors who do report them are punished by professional societies.”