Is Push to Vaccinate Young Kids a Ploy by Pharma to Get COVID Shot on Pediatric Immunization Schedule?

If Pfizer’s COVID-19 vaccine is added to the pediatric vaccine schedule, and if it’s mandated like other childhood vaccines, it will become an evergreen market representing billions of dollars to the drug companies. 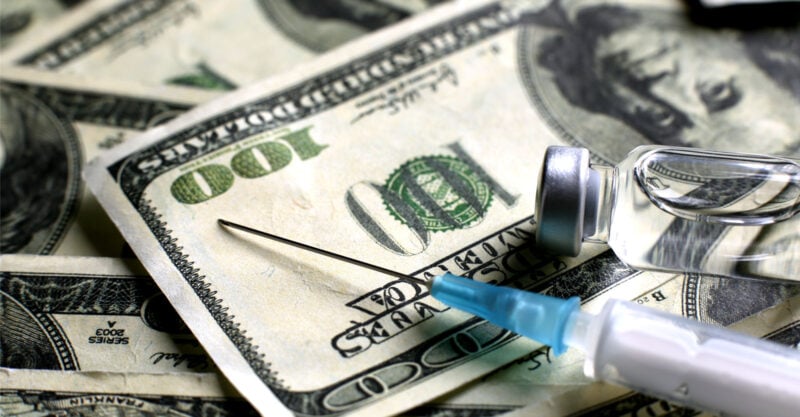 On May 23, Pfizer-BioNTech announced preliminary results from their Phase 2/3 trial evaluating a three-dose vaccine schedule for children 6 months to under 5 years of age would be submitted to the FDA for emergency use authorization (EUA).

Many in mainstream media are hailing this development as important to children’s health, writing, “many parents of these very young children have been really anxious to get their kids vaccinated” and “Parents hoping to get their youngest children vaccinated against COVID-19 got some encouraging news Monday.”

Yet, despite the continued push by mainstream media to encourage parents to vaccinate the very young, the Vaccine Monitor Survey from the Kaiser Family Foundation (KFF) found only 18% of parents with children under age 5 are planning to get their child vaccinated immediately.

KFF reports that a larger number — 38% — are planning to wait to see the side effects the vaccine may have in younger children before making a decision and 27% have indicated they will definitely not have their child injected.

Importantly, the survey also found that “Just over half of parents of children in this age range say they do not have enough information about the vaccines’ safety and effectiveness for children under age 5.”

While information about vaccine injuries from the COVID-19 jab has been difficult to find on mainstream media, it is apparent from these numbers that many parents are concerned about their children’s safety and want more information before they’re willing to risk their health.

A paper published December 15, 2021, in the Journal of the American Medical Association (JAMA) referenced the previous survey by KFF, which found 27% of parents of children 5 to 11 years old were interested in giving their children the jab, which is a 9% drop from the survey in 2022.

The paper sought to smooth the waters with parents who were hesitant to vaccinate their children by attributing fear to misinformation and a misunderstanding of what “EUA” means.

It is interesting to note that the author of the paper has received research grants from Pfizer and Moderna, and also serves on the advisory boards for Johnson & Johnson, Pfizer and Merck.

The JAMA paper states the KFF survey found the primary reason parents were concerned was reasonably the “long-term and serious adverse effects, including future fertility issues.” According to the author, these concerns were addressed and disproven based on just one year’s worth of data.

Pfizer’s 80.3% effectiveness is based on 10 children

Pfizer’s announcement that they were seeking an EUA from the FDA for children 6 months to under 5 years is “based on 10 symptomatic COVID-19 cases identified from seven days after the third dose and accrued as of April 29, 2022.”

While the study included 1,678 children who received three doses of the formulation, the stated 80.3% efficacy in children is based on just 10 cases. The number is so low that even outspoken vaccine advocate Dr. Paul Offit — co-inventor of a rotavirus vaccine — expressed dismay at the number, saying:

“I mean, 10 children — you’re talking about 10 children. It’s a small number, so it’s really hard to comment or this as something more general since you don’t know because the numbers are so small.”

Pfizer announced these results after delaying the EUA application process to gather more data. Initially, children in the study did not produce a significant immune response after two doses, so the company delayed the request until they could give the children a third dose.

The trial reportedly was evaluating “the safety, tolerability and immunogenicity of three doses of the Pfizer-BioNTech COVID-19 Vaccine.”

Curiously, Pfizer’s claim of 80.3% effectiveness in children comes on the heels of a New York State Department of Health study that showed vaccine efficacy in children ages 5 to 11 years old fell to 12% in two months after vaccination.

In other words, 7 out of 8 kids who were vaccinated had no benefit from the vaccine two months after receiving the jab. The data taken from 365,502 children showed a striking difference between children ages 11 and 12.

The effectiveness against infection in 12-year-olds was 67%, but in 11-year-old children, it dropped to 11%.

The data from the U.S. were consistent with a report from Britain that showed effectiveness against symptomatic infection dropped 22.6% after two months in adolescents aged 16 to 17 years.

Interestingly, the Pfizer press release published May 23, mentioned the word “safety” 22 times while discussing the COVID-19 vaccine for children, and wrote the shot was “well-tolerated among 1,678 children under 5 years of age with a safety profile similar to placebo.” The vaccine being used on younger children is one-tenth the strength given to adults.

According to the American Academy of Pediatrics, as of May, 35% of 5- to 11-year-olds received one dose and only 28% received both doses of the vaccine.

If you extrapolate the adverse event numbers using 35% of the pediatric population that received at least one dose, there would have been 34,020 adverse events if 100% of children in the U.S. aged 5 to 11 years had been given the shot.

It seems highly unlikely that 11,907 adverse events in children 5 to 11 reported to VAERS after at least one injection would have resulted in only “mild or moderate” events in children aged 6 months to under 5 years, or that the shot could have “a safety profile similar to placebo.”

Moderna is also requesting an EUA for children under 5

Moderna is also stepping up to the plate and requesting an EUA for a low-dose shot in children younger than age 5. The data they have submitted show the vaccine is effective 37% to 51% of the time against the COVID variant omicron.

I would be hopeful that the review will go on quickly and rigorously — but if it’s approvable, this will be made available to these little children as quickly as possible.”

It’s more likely that young children represent an untapped financial windfall for the company since the vaccine has proven to have dangerous side effects, while the death rate in children from the infection itself is far below any other age group.

But, if the vaccine is added to the pediatric vaccine schedule, and if it’s mandated like other childhood vaccines, it will become an evergreen market representing billions of dollars to the drug companies.

Each year the CDC records vaccine effectiveness for flu shots for all vaccine types in all age groups.

The FDA may find the COVID jab’s 37% effectiveness rate acceptable since the flu vaccine’s adjusted effectiveness is similar, ranging from 34% to 68% in children ages 6 months to 8 years during the 2015-2016 through the 2019-2020 flu seasons.

While the flu shot is a one-jab, annual event, thus far, the CDC recommends multiple jabs with the COVID vaccine.

This means an adult may receive up to five injections of an mRNA shot with unknown long-term effects, which has not proven to effectively protect people against infection.

Since the effectiveness of the COVID jab in adults and children drops in just weeks, it’s highly likely the same will happen in children 6 months to under 5 years.

Again, the combination of a mutating virus, waning immunity and federal approval for a vaccine is a prime example of an evergreen business model.

More Americans are turning away from the jab

According to data released by the CDC, 82.7% of the U.S. population over age 5 have received at least one dose of the COVID vaccine.

According to the CDC, this is 258,133,282 people as of May 24. This is the sound bite you’ve likely been hearing in the news. But there’s something else that’s worthy of noting.

It is important to note that the CDC recommends boosters for people 5 and older but they are not currently publicly tracking that data. This means roughly 17.3% of the population eligible for the vaccine did not receive any doses.

When you add that together with the 11.9% who did not go back for their second dose, it appears that 29.2% of the population have now decided they either will not take the vaccine at all or will not take another.

Why they are pushing for children’s vaccine approval

In this fascinating interview with Alix Mayer, we discuss the nefarious reasons why our children are being aggressively targeted for the COVID-19 injection, even though CDC data show they are not a serious risk.

Mayer is board president of the Children’s Health Defense California chapter and is herself vaccine injured from a series of vaccines she received 20 years ago, before traveling out of the country.

She’s a graduate of Duke University and Northwestern University with an MBA in finance and management strategy. Historically, VAERS has shown that many vaccines have a questionable safety profile, especially when they’re combined.

Yet data from 2021 and 2022 have suggested there’s never been a vaccine as dangerous as the experimental mRNA gene transfer injections for COVID.

The lack of transparency and accountability has been a chronic problem within the industry, but the hazards associated with the COVID jabs have really highlighted this issue. Because the injections are still under EUA, they have legal immunity against liability for vaccine injury.

As Mayer points out, what you may not realize is that although the FDA appeared to approve and license BioNTech’s Comirnaty, the shot continues to be administered under the EUA.

One reason for this is that once a product is fully licensed, the company also becomes liable for injuries.

And, since the pharmaceutical companies understand how dangerous the shots are, they don’t want to be financially liable for injuries.

So, to get immunity for a vaccine not administered under an EUA, they must have the product placed on the childhood vaccination schedule, under which they’re not personally liable if their vaccines injure someone.

Once on the children’s schedule, it also allows the government to mandate the shot. As noted by Mayer:

“This is the holy grail if you’re a vaccine manufacturer of a COVID vaccine right now. You want it to be fully licensed, but not put it on the market until you get it on the children’s schedule.”

The reason the pharmaceutical industry is pushing for vaccines in young children is clearly based on financial interests.

VAERS records show 117 children under 18 have died because of the vaccine and 48,833 have reported adverse events and injuries as of May 13.

It is crucial to share this information with parents who are making lifelong decisions for their children and to support your local politicians whose stated goals are to protect your freedoms.