As ordinary workers across the U.S. watched inflation eat away at modest wage gains in 2021, many corporations — including firms contracting with the federal government — used record-shattering profits to lavish their CEOs with bigger pay packages and reward shareholders with billions of dollars in stock buybacks. 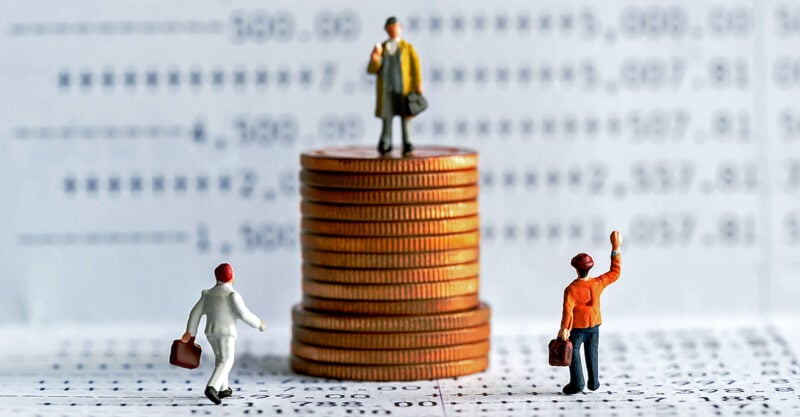 As ordinary workers across the United States watched inflation eat away at modest wage gains in 2021, many corporations — including firms contracting with the federal government — used record-shattering profits to lavish their CEOs with bigger pay packages and reward shareholders with billions of dollars in stock buybacks.

Forty-nine of the publicly traded companies examined in the IPS study, titled “Executive Excess,” had CEO-to-worker-pay ratios above 1,000 to 1 last year.

Amazon, for instance, paid CEO Andy Jassy a staggering 6,474 times more than it paid its median worker in 2021, a year in which the e-commerce giant spent $4.3 million on anti-union consultants.

Overall, IPS found that CEO pay at the 300 corporations increased by $2.5 million to an average of $10.6 million last year while median worker pay grew by just $3,556, rising to an average of $23,968 as inflation soared to its highest level in decades.

IPS noted that skyrocketing inflation — which has been fueled by corporate profiteering — resulted in effective pay cuts for median workers at 106 of the companies in its sample.

Meanwhile, IPS observed, 67% of those firms spent a total of $43.7 billion on stock buybacks, which benefit company shareholders and help boost the stock-based compensation of executives.

Now a common practice among profitable corporations, share buybacks were largely illegal before 1982.

Sarah Anderson, director of the IPS Global Economy Project and lead author of the new study, said in a statement that “CEOs’ pandemic greed grab has sparked outrage among Americans across the political spectrum,” pointing to an April survey showing that nearly 90% of U.S. adults believe the widening chasm between CEO and worker pay is “a problem in this country today.”

That problem, according to IPS’ findings, is being exacerbated by taxpayer dollars. Out of the 300 companies analyzed, 40% were awarded contracts from the federal government between Oct. 1, 2019 and May 1, 2022.

IPS found that the combined value of the federal contracts was $37.2 billion, and the average CEO-worker pay ratio of the contractors jumped to 571 to 1 in 2021.

“Amazon has reported $10.3 billion in recent federal contracts, most of it to provide web services for the National Security Agency,” the report notes. “The company reportedly also received a lucrative share of a multibillion-dollar CIA contract for cloud services. The details and exact value of this contract continue to be classified.”

Among other policy recommendations, IPS argued that President Joe Biden can and should take action unilaterally to ensure that contracts flow to firms with lower CEO-to-worker-pay ratios.

“The president could wield the power of the public purse by introducing new standards making it hard for companies with huge CEO-worker pay gaps to land a lucrative federal contract,” Anderson said.

IPS also laid out other possible policy steps to rein in outlandish CEO pay, a significant contributor to rising inequality.

One is the passage of legislation such as Sen. Bernie Sanders’ (I-Vt.) Tax Excessive CEO Pay Act, which would raise taxes on large companies that pay their top executives over 50 times more than median workers.

IPS also recommended imposing taxes and other restrictions on stock buybacks, which the report characterizes as a “legal form of stock manipulation” that “artificially inflates the value of a company’s shares — and the value of executives’ stock-based pay.”

“President Biden supported a buybacks tax as a revenue source for the Build Back Better bill and included such a tax in his latest budget proposal,” IPS noted. “In addition, Biden proposed new rules that would ban top executives from selling their personal stock for a multi-year period after a buyback.”

“Instead of waiting for Congress,” the group argued, “the president could take action by imposing such a ban on federal contractors.”