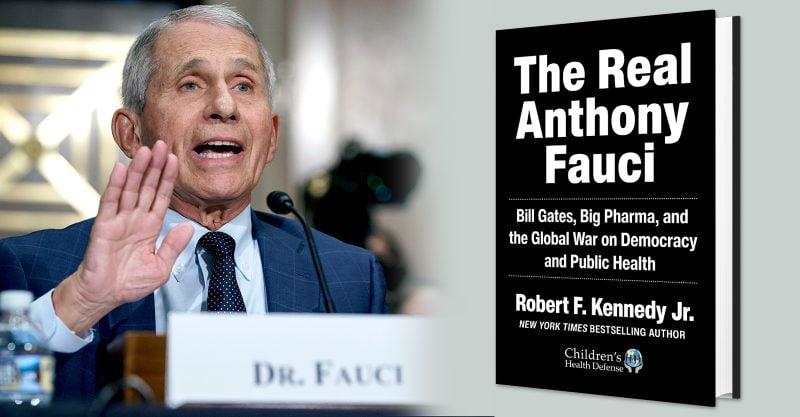 As Kennedy writes in his book:

“… Dr. Fauci copied the choreographed script for winning remdesivir’s [Emergency Use Authorization] from the worn rabbit-eared playbook he developed during his early AIDS years, and then used repeatedly across his career to win approvals for deadly and ineffective drugs.

“Time and again, he has terminated clinical trials of his sweetheart drugs the moment they begin to reveal cataclysmic toxicity. He makes the absurd claim that his drug-du-jour had proven so miraculously effective that it would be unethical to deny it to the public, and then he strong-arms FDA to grant his approvals.”

One of the AIDS treatments promoted by Fauci and his agency, the National Institute of Allergy and Infectious Diseases, was azidothymidine (AZT), a powerful and toxic chemotherapy drug used widely for AIDS patients despite the availability of less toxic options.

AZT, according to SPIN magazine, is a drug that “was worse than the disease, and killed faster than the natural progression of AIDS left untreated.

AZT had been an abandoned cancer drug, discarded because of its fatal toxicity, resurrected in the cynical belief that AIDS patients were going to die anyway, so trying it out was sort of like “playing with the house’s money.”

Kennedy draws comparisons between AZT and Fauci’s remdesivir recommendation for COVID treatment even though less expensive, safer and, according to a growing number of physicians, more effective options such as hydroxychloroquine and ivermectin are readily available.

Kennedy also exposes Fauci’s experiments using various toxic AIDS drugs on Black and Hispanic foster children in New York and six other states. Children (many of whom were living at Incarnation Children’s Center in New York City) who refused to take the “medicine” were forced to have tubes inserted into their stomachs to receive the drugs.

At least 80 of the children died during and following these experiments, many of them buried in a mass grave in Gate of Heaven Cemetery approximately 25 miles north of New York City.

According to journalist Celia Farber, as quoted in “The Real Anthony Fauci”:

“I found the mass grave at Gate of Heaven Cemetery in Hawthorne, New York. I couldn’t believe my eyes. It was a very large pit with AstroTurf thrown over it, which you could actually lift up. Under it one could see dozens of plain wooden coffins, haphazardly stacked. There may have been 100 of them. I learned there was more than one child’s body in each.

“Around the pit was a semi-circle of several large tombstones on which upward of one thousand children’s names had been engraved. I wrote down every name. I’m still wondering who the rest of those kids were. As far as I know, nobody has ever asked Dr. Fauci that haunting question.”

In his book, Kennedy asks: “What dark flaw in Anthony Fauci’s character allowed him to oversee — and then to cover up —the atrocities at Incarnation Children’s Center?”

“At very best, there must be some arrogance or imperiousness that enables Dr. Fauci to rationalize the suffering and deaths of children as acceptable collateral damage in what he sees as his noble search for new public health innovations. At worst, he is a sociopath who has pushed science into the realm of sadism. Recent disclosures support the latter interpretation.”

The “Real Anthony Fauci” debuted at the #2 spot on Amazon’s bestseller list and quickly became #1 there and also at the Wall Street Journal, USA Today and Publisher’s Weekly lists, completely selling out in less than two weeks.

Kennedy’s book is scheduled to be back in stock next week on Amazon, Barnes & Noble and at local bookstores nationwide and in Canada.