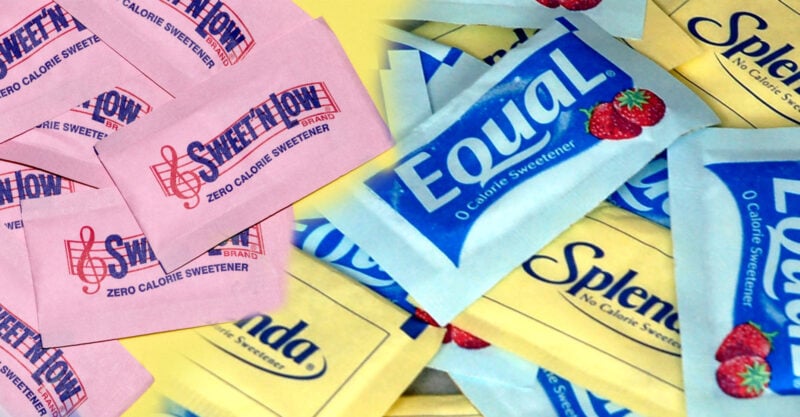 The latest research involves the non-nutritive sweeteners acesulfame potassium and sucralose, which are widely used as no-calorie sugar substitutes.

“In fact, many people don’t realize that these sweeteners are found in light or zero-sugar versions of yogurts and snack foods and even in non-food products like liquid medicines and certain cosmetics,” she said in a news release.

Your liver is a major organ for detoxification, responsible for more than 500 functions in your body. It’s via your liver that nutrients, medications and toxins are processed and, if necessary, sent back into your bloodstream to be eliminated by your bowel and kidneys.

During phase II detoxification, your liver can even process toxins into less harmful substances that your body can get rid of more easily.

In research presented at the American Society for Biochemistry and Molecular Biology’s annual meeting in April, in Philadelphia, however, it was revealed that artificial sweeteners — specifically acesulfame potassium and sucralose — may interfere with your liver’s delicate detoxification process.

For comparison, the well-known toxin DDT (dichloro-diphenyl-trichloroethane) has also been found to inhibit P-glycoprotein (PGP), which is one reason why researchers have stated, “Even in small amounts, these contaminants could interfere with the human body’s natural ability to defend itself.”

“We observed that sweeteners impacted PGP activity in liver cells at concentrations expected through consumption of common foods and beverages, far below the recommended FDA maximum limits … To our knowledge, we are the first group to decipher the molecular mechanism by which non-nutritive sweeteners impact detoxification in the liver.”

For the study, liver cells and cell-free assays, which give insights into cellular processes like transport, were studied, revealing that the artificial sweeteners stimulated transport activity and may bind to PGP, thereby inhibiting the transport of compounds like xenobiotics, drugs and their metabolites, short-chain lipids and bile acids.

The findings could therefore have significant implications for people who take antidepressants, antibiotics and blood pressure drugs, which use PGP as a primary detoxification transporter.

Further, because PGP also plays a role in other body functions, including maintaining the blood-brain barrier, the researchers stressed the need for further research to determine how artificial sweeteners may be affecting other organs beyond the liver, as well as the extent to which they’re interfering with drug metabolism. According to Danner:

“If future studies confirm that non-nutritive sweeteners impair the body’s detoxification process, it would be essential to study the potential interactions and determine safe levels of consumption for at-risk groups. It might also be important to include specific amounts of non-nutritive sweeteners included on food labels so that people can better track their intake.”

In a study of 102,865 adults from France, published in PLOS Medicine, dietary intakes and consumption of artificial sweeteners were obtained and analyzed for associations with cancer incidence. The large-scale cohort study found that people who consumed higher levels of artificial sweeteners had a higher risk of overall cancer compared to nonconsumers.

Among the artificial sweeteners studied, aspartame and acesulfame-K, in particular, were associated with increased cancer risk, while aspartame intake was linked to higher risks of breast cancer and obesity-related cancers, including stomach, liver, colon and rectal cancers.

Specifically, total cancer risks increased by 13% among artificial sweetener consumers, while the risk of breast cancer rose by 22% and the risk of obesity-related cancers increased up to 15%. “These results suggest that artificial sweeteners, used in many food and beverage brands worldwide, may represent a modifiable risk factor for cancer prevention,” the researchers noted.

It’s a concerning finding, considering aspartame alone is used in 1,400 food products in France and more than 6,000 products around the globe. Its high level of sweetness — 200 times greater than sugar — and low calories make it popular among people looking to make their drinks and meals sweeter, without the calories of a comparable amount of sugar. However, its safety has been debated from the start. According to the research team:

“[E]xperts have urged for a re-evaluation by public health authorities of aspartame’s role in cancer development, based on previous and recent findings in animal models, in vitro studies, and, to a lesser extent, human data. Findings about other artificial sweeteners also raise questions regarding their potential role in carcinogenesis based on in vivo studies.”

In 2006, a study led by Dr. Morando Soffritti, a cancer researcher from Italy, found that even in low doses, animals were developing several different forms of cancer when fed aspartame.

Soffritti is the head of the European Ramazzini Foundation of Oncology and Environmental Sciences, a well-respected, independent and nonprofit institution that has been dedicated to cancer prevention for more than three decades. “An exceedingly high incidence of brain tumors” has also been identified in aspartame-fed rats, compared to rats not fed aspartame.

“Harvard researchers in 2012 reported a positive association between aspartame intake and increased risk of non-Hodgkin lymphoma and multiple myeloma in men, and for leukemia in men and women.

“In a 2014 commentary in the American Journal of Industrial Medicine, the Maltoni Center researchers wrote that the studies submitted by G. D. Searle for market approval ‘do not provide adequate scientific support for [aspartame’s] safety. In contrast, recent results … provide consistent evidence of [aspartame’s] carcinogenic potential.”

“After the HLT cases reevaluation, the results obtained are consistent with those reported in the previous RI publication and reinforce the hypothesis that APM [aspartame] has a leukemogenic and lymphomatogenic effect,” the researchers explained.

Again in 2021, a review of the Ramazzini Institute data further confirmed that aspartame is carcinogenic in rodents. The researchers noted that their findings “confirm the very worrisome finding that prenatal exposure to aspartame increases cancer risk in rodent offspring. They validate the conclusions of the original RI studies.”

It’s now well-recognized that protecting the diversity of your gut microbiota is important for optimal health, and antibiotics disrupt gut microbiota significantly. Many are not aware, however, that artificial sweeteners including saccharin, sucralose, aspartame and acesulfame potassium may lead to shifts in gut microbiota similar to those caused by antibiotics.

“Bacteria exposed to the tested compounds exhibited increased reactive oxygen species (ROS) production, the SOS response, and gene transfer. In addition, cell membrane permeability increased in both parental bacteria under exposure to the tested compounds. The expression of genes involved in ROS detoxification, the SOS response, and cell membrane permeability was significantly upregulated under sweetener treatment.”

Disruption of gut microbiota has also been linked to non-alcoholic fatty liver disease (NAFLD), and artificial sweeteners may also have a role to play in this condition. NAFLD is the most common chronic liver disease in developed countries, characterized by a buildup of excess fat in your liver that is not related to heavy alcohol use.

While increased intake of toxic industrially processed seed oils plays a role in increasing the incidence of NAFLD, artificial sweeteners’ ability to cause gut dysbiosis may be another culprit.

Artificial sweeteners have also been shown to induce glucose intolerance by altering gut microbiota. Research led by Eran Elinav of the Weizmann Institute of Science in Rehovot, Israel, first showed that mice fed artificial sweeteners developed glucose intolerance after 11 weeks. They then revealed that altering the animals’ gut bacteria influenced their glucose response.

What’s more, a study published in Frontiers in Nutrition found alterations in gut microbiota of offspring to mothers fed low doses of aspartame and even the natural herb stevia, stating that consumption of “sweet tastants have a lasting and intergenerational effect on gut microbiota, microbial metabolites and host health.”

Much of the research surrounding artificial sweeteners has focused on their use in beverages, with such drinks used as a proxy for estimating overall consumption levels. However, as the PLOS Medicine team noted, “A more precise assessment of exposure to artificial sweeteners from a broader range of ultra-processed products (e.g., flavored yogurts, low-sugar snacks, ready-to-go meals, table-top sweeteners) appears necessary.”

If you’re interested in eliminating your exposures to these toxic products, be aware that they’re hidden in many products beyond beverages, including dairy products, ketchup, salad dressing, baked goods and medications.

For a simple trick to satisfy your sweet craving if one strikes — without reaching for an artificial sweetener — eat something sour. Sour taste, such as that from fermented vegetables or water spruced up with lemon or lime juice, helps to reduce cravings for sweets.