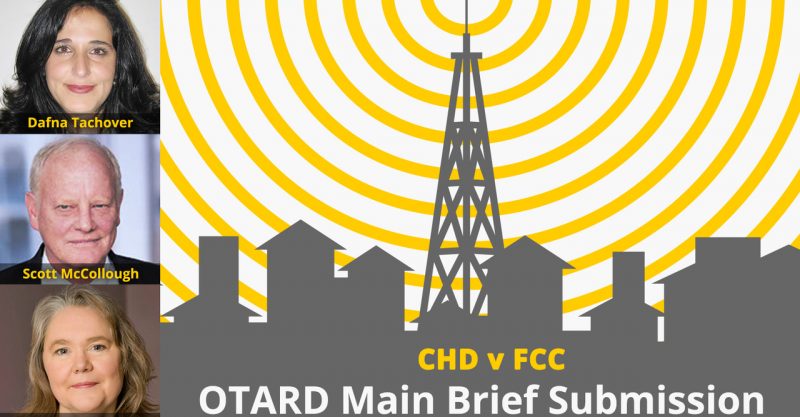 On Wednesday, June 23, Children’s Health Defense (CHD) filed its main brief in its case against the FCC’s “Over-the-Air Reception Devices” (OTARD) Rule Amendment. The case itself was filed on February 2, 2021, in the US Court of Appeals for the DC Circuit.

Mr. McCollough is a seasoned telecommunications and administrative law attorney. He also represented CHD in its case against the FCC for its decision not to review its health guidelines. In January 2021, he argued on behalf of CHD and all petitioners in front of the US Court of Appeals for the DC Circuit. The case is pending the court’s decision.

In the session, they explained the approach CHD took with the brief and the different arguments that were raised. The intention of the session was to clarify the brief for the non-attorneys among us. We recommended that people read the brief before the webinar, dedicated 30 minutes for a live Question and Answer session.

On the same day, an Amicus Brief is expected to be filed in the OTARD case. The Amicus Brief will be filed on behalf of dozens of US organizations that are working around the country to promote safer tech.

Attorneys Petra Brokken from Minnesota for Safe Tech, who has initiated the effort, and  Stephen Díaz Gavin, who submitted the brief on behalf of the organizations, joined us to discuss the Amicus Brief.

Stephen Díaz Gavin is a partner in the law firm of Rimon, P.C., working out of the firm’s Washington, D.C. office. He is also a member of Rimon’s European practice team. He has been involved in many rule-making proceedings before the FCC  during his nearly 40 years of practice. Stephen has participated in the review of numerous FCC decisions before the U.S. Courts of Appeals. In 2019, he argued on behalf of several Native American tribes, including his clients the Crow Creek Tribe of South Dakota and the Omaha Tribe, in the successful challenge of the FCC’s “small wireless cell” order in United Keetoowah Band of Cherokee Indians v. F.C.C (The NRDC was also a petitioner in this case).

View the Webinar and Q&A Session